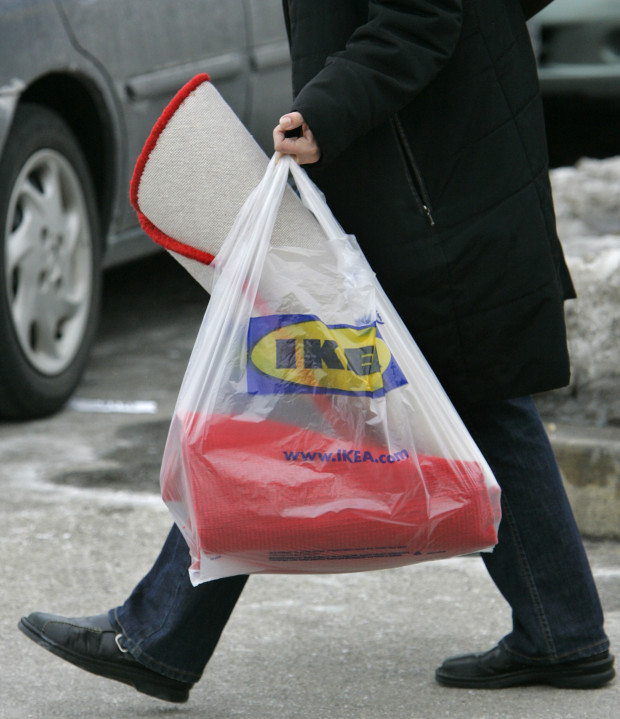 A customer totes a shopping bag outside an Ikea store in Conshohocken, Pa., on Tuesday, Feb. 20, 2007. The Swedish retailer, which has its U.S. headquarters in suburban Conshohocken, at first charged customers a nickel for each plastic bag but has since eliminated disposable bags altogether and charges customers for reusable bags.

At least four Pennsylvania cities are urging state Senators to reject a bill that would prevent municipalities from banning plastic shopping bags or imposing fees to curb their use.

Philadelphia, Pittsburgh, York and Erie say that single-use plastic shopping bags are environmentally damaging, and increase waste-disposal costs for cities around the Commonwealth. They also argue that the bill, HB1071, would infringe on cities’ rights to run their own affairs.

The cities, and several associations representing them, called on members of the state House of Representatives to reject the bill but that effort failed on April 25 when the House approved it by a vote of 102-82, and the measure now goes to the Senate for consideration.

The bill “prohibits political subdivisions from imposing a ban, fee, surcharge or tax on plastic bags at point of sale” but does not prevent retailers from taking their own measures to cut bag use.

It was supported by most Republicans and opposed by most Democrats but was co-sponsored by Rep. Mike Hanna, the House Democratic whip, who is trying to protect jobs at Novolex, a plastic bag manufacturer in his Centre County district.

“It’s very important to us that we pass this legislation to make sure we that we’re maintaining jobs in our area,” said Samantha Lockhart, a spokeswoman for Hanna. “By taxing plastic bags, that would eliminate hundreds of jobs in our area. Our focus is on jobs and family-sustaining careers – that was our goal for this legislation.”

Lockhart issued a statement on April 25 saying the bill would encourage plastic bag recycling, but omitting any mention of the bill’s aim to prevent local authorities banning or taxing bags.

“I spun that language in the press release to make it sound more positive than talking about a tax,” Lockhart said. “If they were to impose a ban or a tax on plastic bags that would discourage people from using them and therefore recycling them.”

Rep. Greg Vitali, a Democrat from Montgomery and Delaware Counties, said he voted against the bill because plastic bags clog drains, fill up landfills, and pollute the ocean, and because municipalities should have the right to set their own rules on the use of bags.

Although the cities failed to persuade a majority of House lawmakers to reject the bill, they are expected to renew their calls when the bill moves into the Senate, Vitali said.

According to the Plastic Ban Bag Report, a national advocacy group, 165 U.S. cities have some form of legislation to restrict the use of plastic shopping bags. The cities include Washington DC where bag use has dropped by about two-thirds following its imposition of a fee in 2010.  Bigger reductions have occurred in Boulder, Colo., and San Jose, Calif., encouraging residents to take reusable shopping bags to the supermarket, advocates say.

But the bill’s supporters say there’s no evidence that such measures work, and say they impose a burden on the poor who may have to pay a per-bag fee.

“Studies conducted in these cities and states reveal that plastic bag bans or taxes had no impact on the amount of retail bag waste generated,” a summary of the bill says.

In Philadelphia, the City Council urged state lawmakers to vote against the bill, arguing that it would restrict the city’s ability to impose taxes and fees to solve its own problems.

“By prohibiting a potential revenue source to fund worthy initiatives such as waste removal, HB1071 further ties municipalities’ hands and places a greater burden on individuals and businesses that pay property taxes,” the council wrote in a letter on April 20.

City Council spokeswoman Jane Roh said Councilman Mark Squilla introduced a plastic bag bill in 2015 but did not have the support to bring it to a vote. Still, she said all council members resist moves by state lawmakers to curb local powers.

“Regardless of where they are on the fee, City Council members agree that state pre-emption bills are unfair and counterproductive,” Roh said.

Opposition to the bill also came from Pittsburgh City Council whose president, Bruce Kraus, wrote to state lawmakers the day before the House vote, arguing that the state should support local efforts to reduce waste.

“Implementing a program to reduce the use of plastic bags and encouraging recycling decreases the chances of plastic bags that will outlive all of us, filling landfills for decades to come,” Kraus wrote.

The Pennsylvania Municipal League, also writing to oppose the bill, said it didn’t understand why the bill excluded retailers from the proposed city ban on plastic bag taxes. If a large retail chain decided to charge for bags or stop using them altogether, more manufacturing and recycling jobs would be affected than by any municipality that did so, it argued.

In the Senate, the bill will be referred to the appropriate committee, said Jenn Kocher, a spokesman for the Republican majority. “We are interested in taking a look at the House proposal,” she said.

It’s unclear whether Gov. Tom Wolf would sign or veto the bill if it reaches his desk, said Rep. Vitali. He said opponents are most concerned that the measure would be attached in coming weeks to a wide-ranging budget bill such as the fiscal code which could increase the chances of a gubernatorial signature.