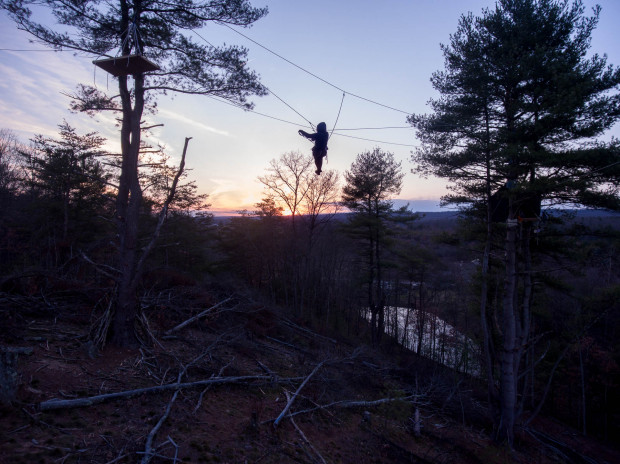 A tree sitter on the Gerhart's property in Huntingdon County hoping to deter construction of the Mariner East 2 pipeline. Sunoco has obtained a court order that allows the company to order an arrest of the Gerharts and charge them with trespass on their own property.

Huntingdon County residents protesting the construction of Sunoco’s Mariner East 2 pipeline across their land now face arrest on their own property due to a rarely imposed court order known as a “writ of possession.” Common Pleas Court judge George Zanic signed the order last week, which Sunoco had sought as an “emergency measure” in response to the landowners tree-sitting on their property. Ellen and Stephen Gerhart in Huntingdon, Pa., along with their daughter Elyse, have become outspoken critics of the pipeline and the use of eminent domain by the company to take possession of land along the 350 mile route.

Charges against Ellen Gerhart were dropped after she was arrested last year for trespass on her own property. But with this new writ, Sunoco can enlist law enforcement to arrest anyone within the easement, including the actual property owners.

Elyse Gerhart says the tree-sitting began in early February, after Sunoco secured the permits from the Department of Environmental Protection to begin construction. She would not say how many people were participating in the protest, but said she herself had been up in the trees. Although the Gerharts’ challenge to the eminent domain takings are making their way through the appeals courts, the company can begin building. Recent efforts to seek a stay in construction failed.

“We’re seriously looking at going to jail,” said Elyse Gerhart. “I’m not the type of person who lets injustice go unchallenged, and neither is my mother. What we’re doing makes [Sunoco] show their true face.”

Sunoco’s parent company, Energy Transfer Partners, is the same company that battled with Native American protesters over the Dakota Access pipeline in North Dakota, where a private security company used pepper spray and dogs on protestors.

Rich Raiders, the Gerharts attorney in the eminent domain case, said the use of a writ of possession is “very rare and very unusual.”

The Gerharts have refused to voluntarily grant an easement on their property, which includes a 50 foot wide right-of-way along with an additional 25 foot staging area. The Gerharts live on 27 acres of woods and wetlands in Huntingdon County.

Their appeal before the Commonwealth Court argues, in part, that Sunoco should not be granted eminent domain authority because the natural gas liquids pipeline, which would carry ethane, propane and butane from the Marcellus Shale to an export terminal in Delaware County, is not in the public interest. Sunoco says the public good lies in supplying propane to Pennsylvania residents in need of heating oil. But the Gerharts have argued that the heating oil demand in the state is already satisfied by the amount of natural gas liquids carried by the currently operating Mariner East 1 pipeline.

Sunoco spokesman Jeff Shields says the writ of possession is lawful. “We are proceeding with construction in Huntingdon County and elsewhere and will conduct ourselves according to the law at all times,” Shields said in an email.