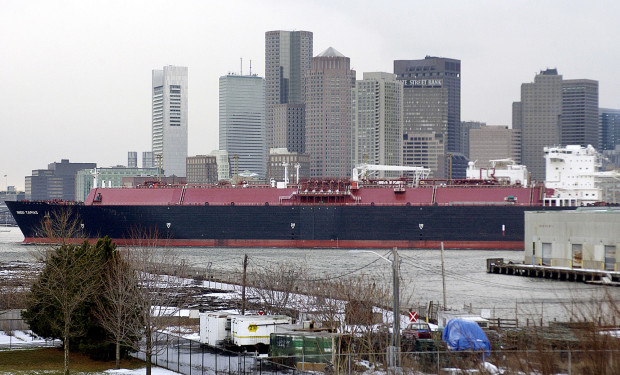 FILE: A liquefied natural gas tanker in Boston Harbor. The city continues to import natural gas from overseas, despite the abundant nearby supply of gas in the Marcellus Shale. Files

A new report out this week from the U.S. Chamber of Commerce argues the northeastern United States needs more natural gas pipelines.

If no new pipelines were built, it could cost the region over 78,000 jobs and $7.6 billion in GDP by the year 2020, the report finds. It is the fifth in a series of reports from the Chamber of Commerce, examining potential impacts of energy policies.

The new analysis focuses on New England, which has become increasingly reliant on natural gas for its electricity. At the same time, politicians and activist groups have sought to block expansions of pipeline infrastructure.

“Across the board, Northeast natural gas and electricity prices are significantly higher than the rest of the country across all sectors,” says the report. “While several factors play into this trend, the availability of natural gas supply into the region is one of the primary drivers.”

In 2014 New York State banned fracking. Last year, the state’s Department of Environmental Conservation denied necessary permits for the Constitution, an interstate gas pipeline originating in northeastern Pennsylvania, that had already been approved by federal regulators.

“States are free to make their own decisions. If New York wants to ban fracking, that’s a shame for businesses up there. But when those kinds of decisions were made, there wasn’t much an impact on Pennsylvania,” says Kevin Sunday, of the Pennsylvania Chamber of Business and Industry. “But as the conversation around energy gets more and more politicized, we’re starting to see the consequences of other states’ decisions.”

Sunday calls it “absolutely crazy” that gas wells in northeastern Pennsylvania are among the most productive in the world, yet the city of Boston, Massachusetts continues to import liquefied natural gas from overseas.

The pipeline constraints create real economic harm, according to the report. If no new pipelines were built, the Chamber of Commerce estimates Pennsylvania would be the biggest loser.  “The commonwealth is projected to lose out on nearly $2.4 billion in total GDP over a four year period,” the report says. “Pennsylvania could see thousands of potential jobs disappear across the upstream, midstream and downstream sectors and with them almost $1.3 billion in labor income.”

But the building boom in new pipelines has created a growing opposition movement, which includes environmental groups and citizens who feel the projects’ use of eminent domain threatens private property rights. Melinda Tuhus of the group, Beyond Extreme Energy, criticized the report.

“We need to keep fossil fuels in the ground,” she says. “Renewables are going gangbusters. The prices are falling drastically. Where I live in Connecticut, we think it’s a matter of political priorities.”