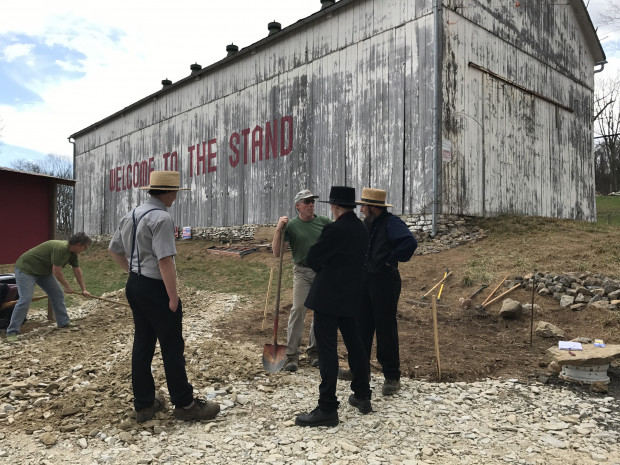 Activist Tim Spiese talks with an Amish family who live next to the pipeline encampment.

As authorities clear out the Dakota Access pipeline protest camp, battles have flared up in other states, including Pennsylvania, which has become a major hub of natural gas development. Anti-pipeline activists recently launched an encampment in Lancaster County, and they’ve been coordinating with groups around the country.

“I’m willing to get arrested”

There’s a big barn with freshly-painted red letters on the side. It reads: “Welcome to the Stand.” Mark Clatterbuck is with the group Lancaster Against Pipelines, which is leading the charge against the Atlantic Sunrise— a recently approved $3 billion pipeline. Once built, it will move natural gas southward through 10 Pennsylvania counties.

“This is a historic tobacco barn that we’re using as the base of operations,” says Clatterbuck. “That’s where we’re storing food donations, camping supplies, tarps.” 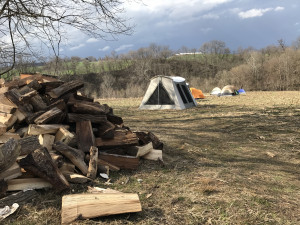 A few dozens people have been sleeping at the Lancaster encampment.

The owners this Conestoga Township property refused to make a deal with Williams, the company building the Atlantic Sunrise. Now portions of the farm may now be taken through eminent domain.

So they’ve welcomed in dozens over protesters who built a camp in one of their cornfields. It has a food truck, a large military tent, and a pair of portable toilets. On Saturday, crews were installing power in the barn.

“We’re running electric and we’ll run cable, so we have internet,” says Clatterbuck.

He and others here took part in the Standing Rock protest in North Dakota. They’ve taken lessons from that experience and are rehearsing nonviolent direct action scenarios.

Molly Wallace of Leola says she’s probably too much of a wuss to stay out in a tent overnight, but she wants to make her voice heard.

“I’m willing to get arrested,” she says. “It’s a cause worth getting arrested for.”

This “cause” encompasses a long list of concerns about the pipeline— including its implications for climate change, the seizure of private property, effects on the environment, and questions about whether there’s really a public need for all this gas, since some of it will be exported.

Similar fights have emerged over the Mariner and PennEast pipelines in Pennsylvania and projects in Louisiana, Texas, Florida, New Jersey, and Massachusetts.

Although pipelines have been around for a long time, the nationwide surge in projects is something new. It’s all because of the domestic shale boom, which unlocked huge reserves of natural gas and oil. Williams spokesman Chris Stockton says the supply center for fossil fuels has shifted dramatically.

“Pipeline are one of these things–normally out of sight, out of mind. People don’t give a lot of thought to where their natural gas comes from,” he says. “But this shale development has really turned our industry upside-down.”

President Donald Trump is viewed as friendly to the oil and gas industry. But Williams CEO Alan Armstrong warned his colleagues at a conference this year in Pittsburgh that they shouldn’t get complacent because of the new administration.

“That is not changing the opposition we have a at a local level,” Armstrong told the crowd. “We’re going to continue to see that, and I’ll tell you, it may even enhance.”

“Standing Rock is the playbook”

Activists are taking inspiration from each other. Stephanie Graybill runs the kitchen at the Lancaster encampment — her food truck, the Gypsy Grill, is painted like a cow and fits right in on the farm. She also traveled to North Dakota for the Standing Rock protest last year.

“I was scared because it was so cold,” she says. “I’d never experienced weather like that in my life, and the wind. It was just brutal.” 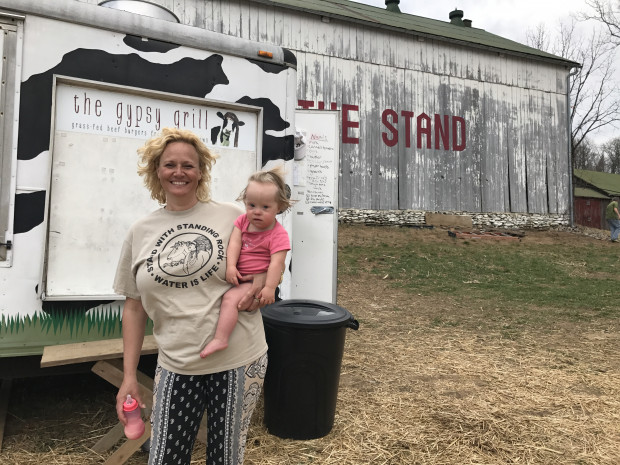 Stephanie Graybill runs the kitchen at the Lancaster encampment. She brought her daughter Ella to the Standing Rock protest last year.

Now she’s out in the sunshine, on an unseasonably warm winter day with her two daughters—21-month-old Ella and 12-year-old Madi. Graybill says about six people she met at Standing Rock are making their way out to Pennsylvania in the coming weeks.

“I think Standing Rock’s the playbook for camps like ours,” says Graybill. “We’re tired of government pushing us around. They’re supposed to be working for us. Not against us.”

It remains to be seen how this encampment will unfold. At times, violence erupted between law enforcement and the North Dakota protesters. A Florida man was killed by police Sunday after he fired a gun at pipeline construction equipment.

So far the Lancaster activists appear to have a positive relationship with officers. Corporal John Michener of the Southern Regional Police came by on Saturday to share a weather alert.

“I heard on the radio there was a severe thunderstorm warning for the area,” he says.”I wanted to make sure they were aware.”

And as opponents continue to organize against their pipeline, Williams says it respects the rights of people to protest peacefully.