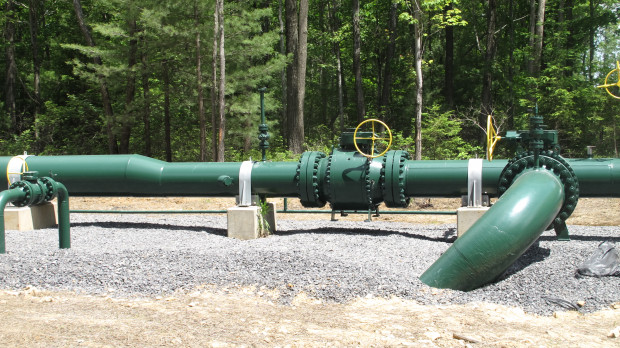 Pipelines like this gathering line in Tiadaghton State Forest are among the possible solutions to increasing natural gas supply to under-served areas, a topic being addressed by a new NARUC study.

A national investigation by utility regulators into ways of increasing natural gas supplies to under-served or un-served areas appears to be ignoring alternative energy sources and may be exposing those communities to high maintenance costs for new pipelines, critics said.

Utility regulators are forming a task force to look at ways of supplying more gas to under-served areas, including rural communities, in an initiative co-chaired by a commissioner from the Pennsylvania Public Utility Commission.

The panel will examine ways of expanding natural gas infrastructure and encouraging suppliers to connect residential, industrial and commercial customers in communities that have been unable to benefit from the current low price of gas from areas like the Marcellus Shale.

The National Association of Regulatory Utility Commissioners said Monday the panel will be co-chaired by John Coleman, one of the Pennsylvania PUC commissioners, who has helped to address supply issues in the state.

Critics said the plan does not take into account the costs of maintaining new natural gas lines in communities that may be unable to afford them.

Lynda Farrell, executive director of the nonprofit Pipeline Safety Coalition, urged the task force to consider the local costs of expanding pipeline infrastructure when issuing its recommendations, as scheduled at the end of 2017.

After an explosion in a gas distribution line at Allentown in 2011, communities served by the line were told by the PUC that they would have to pay for the repair through rate increases, Farrell said. “This begets the fiscal question of who pays for this social justice initiative if pipeline expansion is deemed necessary by the task force,” Farrell said. “The study should address this aspect.”

She also called on NARUC to define “under-served and un-served” areas so that outside groups can better understand the scope of the study. If in fact it aims to study residential, commercial and industrial customers in urban and rural areas, then the eight-month study period is “quite ambitious,” she said.

For his part, Coleman said that limited access to natural gas is a problem for affected consumers.

“These issues generate frustration and added expense for our consumers, and compromise the competitiveness of our communities, and we are anxious to explore ways to remedy this situation,” Coleman said in a statement.

The task force will examine the access and expansion of gas supply to under-served and un-served areas; will use case studies to review barriers to access; recommend ways of expanding supplies, and identify best practices by using the experiences of different states.

In Pennsylvania, a possible model for expanding access is Leatherstocking Gas Co., based in Montrose, Susquehanna County, which in 2012 became the state’s first new gas-distribution company to be set up in more than half a century, according to Nils Hagen-Frederiksen, a spokesman for the PUC.

Energy companies in Pennsylvania are expected to build thousands of miles of natural gas pipeline in coming years to increase access to national and global markets for the abundant reserves of the Marcellus Shale.

The task force will look not only at the provision of “last-mile” distribution lines but also at the costs of conversion from other forms of energy such as electricity or fuel oil, Hagen-Frederiksen said.

“If you have bottled gas, the conversion might be minimal but if you are converting from electric or fuel oil, there’s a secondary barrier,” he said. “Consumers may be interested in gas but there may be economic barriers outside the current system.”

It will also examine ways of paying for system upgrades, such as spreading the cost of new pipelines over time by adding small increments to ratepayers’ bills.

The panel will look at different approaches to such questions, and produce its recommendations at the end of 2017, Hagen-Frederiksen said. “The goal is to take a deep dive into what different states are doing, look at what’s working, and then assemble a list of case studies and best practices.”

Rob Altenburg, director of the energy center at the environmental group PennFuture, said the initiative reflects the abundance of natural gas and the desire by producers to find new markets and drive up the price, which has been trading on the New York Mercantile Exchange at below $5 per million BTUs for most of the last seven years.

“The subtext of this is that we have a glut of natural gas so there are a lot of people who are looking for ways to sell off the gas and raise gas prices,” Altenburg said. “There are a lot of wells that aren’t actually flowing because prices are low and they don’t have the market for it.”

Altenburg said NARUC – whose members regulate water, telecommunications and transportation as well as energy – should be looking at whether renewable fuels or energy efficiency would be more appropriate for some communities than just expanding their access to natural gas.

“If they are only looking at how to expand infrastructure, they are missing some critical points,” he said.

Commissioner Coleman’s selection as co-chair of the initiative probably reflects the fact that fellow Pennsylvania commissioner Robert Powelson is the current chairman of NARUC, and that Pennsylvania is the second-biggest producer of natural gas among U.S. states, Altenburg said.