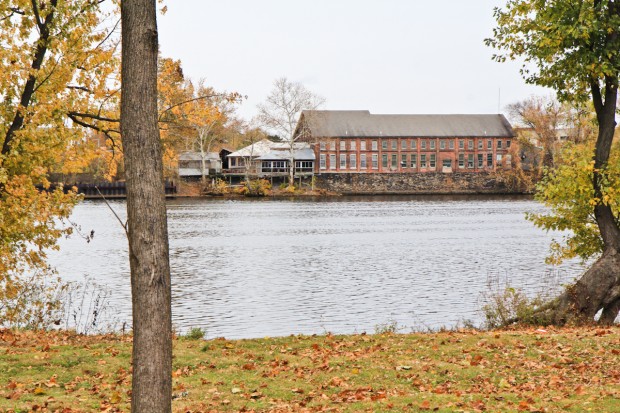 The Delaware River near Morrisville, Pa.: Could water quality see further gains under a DRBC proposal to boost fish populations?

Water quality in the Delaware River estuary has improved over the last few decades to the point where regulators are considering adding the breeding of fish to a list of designated “uses” for that section of the river.

The Delaware River Basin Commission will hold a public hearing on April 6 to discuss its proposal to include fish propagation in the official uses of a 38-mile tidal stretch of the river between Philadelphia and Trenton.

The river’s current uses, as defined by the commission in 1967, are limited to the “maintenance” or survival of resident fish, and the passage of migratory fish, both reflecting the low levels of dissolved oxygen and a heavy load of pollution that characterized the river in past decades.

Since then, pollution has declined from industry, sewers, and so-called non-point sources such as lawn runoff, allowing oxygen levels to rise, and helping fish populations recover.

A DRBC study released in 2015 found that water quality and aquatic life in the estuary have improved “substantially and significantly” since 1967, and now justify further investigation to answer questions including the dissolved oxygen requirements of resident and migratory fish, and what volume of nutrients can be discharged into the river while maintaining fish-friendly oxygen levels.

“The study found that conditions in the river substantially exceed the designated use of only maintenance but there is still weakness in successful reproduction for one or more species,” said Clarke Rupert, a spokesman for the DRBC.

Based on the research, the DRBC has produced a draft resolution that would establish fish propagation as a designated use for that section of the river; launch a new study on water conditions, and potentially make a rule that would formalize the new use.

The proposed new study would look at issues that would affect attainment of a “higher use,” like technical and social and economic factors, and would look at ways of taking early action, Rupert said.

Carol Collier, the DRBC’s former executive director, said that the better water quality suggests that it’s a good time for a plan that recognizes the gains and spurs further improvements.

Collier, now a water-quality specialist at the Academy of Natural Sciences of Drexel University, said polluters such as waste-water plants might be required to make more cuts in their discharges but any such policies would be informed by the DRBC’s proposed new study.

“It’s really a good story, that we’ve gone from having zero oxygen in the river to supporting 60 or so species of fish now,” she said. “I think the time is right to move to the next level.”

To decide whether to go ahead with the plan, the DRBC is expected to work with a better model for oxygen levels than it had in the past, Collier said. The commission would also need to identify what level of dissolved oxygen would support the reproduction of certain fish; how attainable that would be for waste-water plants, and how long it would take the plants to install the right equipment.

It’s unclear how much additional investment would be needed for the plants to help boost the oxygen level in the river, Collier said. “That’s exactly what needs to be studied: how high does the level need to go, and what needs to be done to get there,” she said.

But Delaware Riverkeeper Network accused DRBC of dragging its feet on the fish propagation rule proposal, and said such a change was long overdue.

The draft resolution “fails to fulfill your legal obligations to protect the Delaware River, to prevent backsliding of water-quality protections achieved, and fails to fulfill the requirements of the Clean Water Act anti-degradation program,” DRN said in a statement. It said the DRBC has been discussing the propagation issue since 2008.

If a new rule is adopted, it would recognize the improvement in water quality, and would protect the spawning, eggs, larvae and early-stage juveniles of designated species of fish, Rupert said.

The improvement in water quality partly reflects standards set by the DRBC since its founding in 1961, especially its setting of pollution “budgets” to limit discharges from individual companies, Rupert said. The gains were also helped by the creation of the U.S. Environmental Protection Agency in 1970 and the passage of the federal Clean Water Act in 1972.

The commission – which consists of representatives of the governors of Pennsylvania, New Jersey, New York and Delaware, plus the U.S. Army Corps of Engineers for the federal government — will hear oral comments on the draft resolution at the April 6 meeting, and will invite written comments until April 13. The proposed study, together with any new rulemaking, would take about six years.

This story has been updated with comments from Delaware Riverkeeper Network.