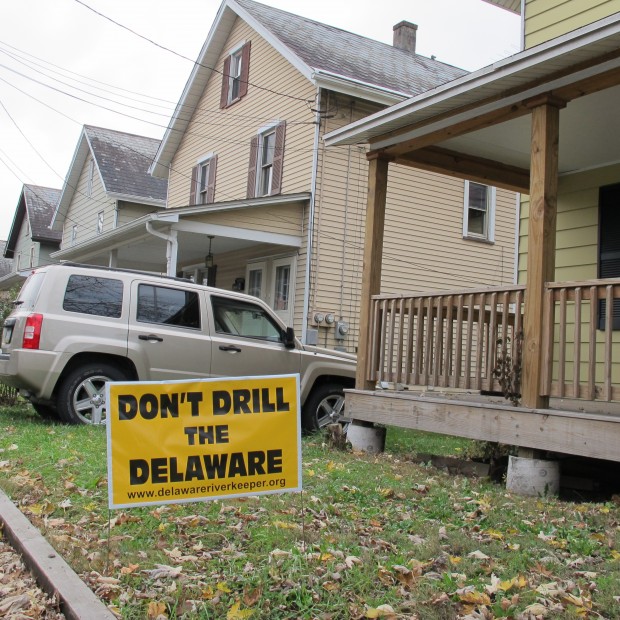 Defenders of a longstanding de-facto moratorium on natural gas drilling in the Delaware River Basin say there are gathering signs of a renewed push to allow natural gas production by the industry and its allies.

Environmental groups including Delaware Riverkeeper Network say officials from the Delaware River Basin Commission, which is composed of representatives from New York, New Jersey, Pennsylvania, Delaware and the federal government, have been in talks with member states about finalizing work on oil and gas regulations that began before a de-facto moratorium was imposed seven years ago.

Opponents of any move to open the basin to shale gas development also worry about a lawsuit brought by a group of Wayne County landowners who challenge the DRBC’s right to regulate drilling.

And they fear that there will be new pressure from the Trump administration, via the U.S. Army Corps of Engineers, its representative on the DRBC, to allow gas drilling at the eastern edge of the Marcellus Shale.

The debate over gas drilling near the Delaware River dates back seven years. In May 2010 the DRBC’s five Commissioners voted unanimously to hold off on any decisions regarding drilling in the Delaware River Basin until new regulations were adopted. The de-facto moratorium imposed by the Commission prevents drilling for natural gas in Pennsylvania’s Wayne and Pike counties, as well as parts of southern New York, until the DRBC establishes its own regulations. If their rules are more stringent than state regulations, the DRBC rules would trump those in Pennsylvania.

In early November, 2011, the DRBC posted draft regulations, but cancelled the vote by commissioners after then-governor of Delaware, Jack Markell, said he would vote against them. Since then, the commission has remained silent on gas drilling, while commission staffers worked behind the scenes. New York has since banned fracking.

A spokesman for newly elected Delaware Governor Chris Carney says he “will thoroughly review any regulations impacting the standing moratorium on drilling or fracking in the Delaware River Basin before taking a position.”

Former Governor of Pennsylvania, Tom Corbett, supported drilling in the Delaware Basin. The current governor, Tom Wolf, made it a campaign promise to continue supporting a moratorium. Asked at a recent town hall meeting in Philadelphia about his position, Gov. Wolf again reiterated his position that gas production should not take place in Wayne and Pike counties.

In their latest attempt to resist any rollback of the moratorium, environmentalists plan to attend a public meeting of DRBC commissioners in Washington Crossing, Pa. on Wednesday to urge the five-member panel to reject any such move.

Maya van Rossum, who leads DRN, said that any attempt to allow gas drilling in the basin would violate the river’s “special protection waters” and would be politically perilous for any governor who voted for it, given what she said was strong public support opposing such moves. 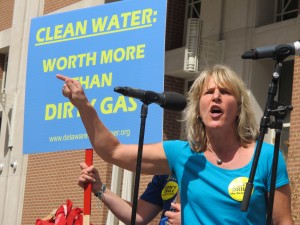 “This is really a pre-emptive strike,” van Rossum said, referring to Wednesday’s meeting. “This is really about going right to the commissioners and making it very clear that the community will not stand for opening up the watershed to fracking. We’re essentially sending a message over the bow which says ‘don’t even go there.’”

The Delaware Riverkeeper Network is also very concerned about the lawsuit, which questions the jurisdiction of the commission.

Peter Wynne, a Wayne County resident who would like to see gas drilling in Wayne and Pike counties, but is not part of the lawsuit, says landowners who want gas development on their property don’t stand a chance against more vocal critics downstream.

“A lot of people up here are reconciled to the fact that our numbers are so small, so what we think doesn’t matter down river,” Wynne told StateImpact. “[Opponents] are very well educated and capable of organizing. Most people [in Wayne and Pike counties] are irritated, and they’re hoping this lawsuit will shake out some kind of closure on this deal.”

Neil Shader, a spokesman for the DEP, said this week that the discussions are “ongoing” but he was unable to provide an update on progress. 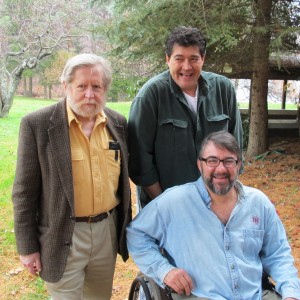 Curt Coccodrilli (R) with his brother Chuck and Peter Wynne, on their property which lies on the border of the Susquehanna and Delaware river basins. The Coccodrilli's are part of a landowners group who sued the DRBC over gas drilling regulations.

Reid Porter, a spokesman for the American Petroleum Institute, said the oil industry’s leading trade group is opposed to the moratorium which he called “bad public policy,” but he said API is not involved in any talks with the DRBC.

Campaigners such as DRN are now calling for a permanent ban on shale development in the basin, a decision that can only be taken by the commissioners – the governors of Pennsylvania, New York, New Jersey and Delaware plus the federal representative, the Army Corps of Engineers.

Some observers argue that the basin is already safe from development because its gas reserves are not rich enough to attract investors.

John Quigley, the former secretary of the Pennsylvania DEP, noted that some companies surrendered leases in the basin some years ago, and that potential developers would have sued to get access to the region by now if they thought gas reserves were big enough.

“I am very skeptical that commercially attractive quantities of natural gas exist in the basin whether there are regulations allowing it or not,” he said.