Pennsylvania’s Department of Environmental Protection issued final permits for the Mariner East 2 pipeline even though the pipeline’s builder, Sunoco Logistics, had not met all regulatory requirements at the time of issuance, DEP documents show.

The state’s top environmental regulator acknowledged that the company’s applications for permits on water crossings and soil disturbance contained many “deficiencies,” but gave the multi-billion dollar project a green light anyway, according to the documents obtained by StateImpact.

One of the documents, issued for permits in Berks County, quotes the state’s Bureau of Waterways, Engineering and Wetlands as saying that the existence of deficiencies in the application for a Chapter 105 water permit would not stop the permit being issued for that section of the 350-mile natural gas liquids line.

“The Bureau explained that minimum standards have been met and many remaining identified deficiencies are not required to be addressed for permit issuance,” said the document, dated Feb. 10, three days before the permits were issued. “Therefore, at the direction of the Bureau, special conditions have been drafted to address the outstanding items.”

Identical or similar language is used in documents, known as “records of decision,” approving permits for at least seven other counties where the pipeline will run on its route from southwestern Pennsylvania to an export terminal at Marcus Hook near Philadelphia.

The documents, obtained from DEP by three environmental groups that are appealing the issuance of the permits before the state’s Environmental Hearing Board, follow evidence that the DEP identified hundreds of deficiencies in Sunoco’s permit applications as recently as September 2016, and instructed the company to correct them and resubmit the applications.

The latest applications for water-crossing and soil-disturbance permits were made in December 2016, but the documents show that many deficiencies remained just days before the permits were signed off on by DEP officials on Feb. 13.

DEP spokesman Neil Shader said he could not explain what the documents mean by “minimum standards” and “special conditions,” or make any other comment on the documents because the matter is being litigated.

A former DEP official, who spoke on condition of anonymity, said he did not understand what the “minimum standards” or “special conditions” might be, and had never known a situation where permits were issued despite the existence of deficiencies.

In previous versions of the permit applications, the deficiencies included a lack of construction details for water crossings; no analysis of how water quality would be maintained at each crossing, and no description of how those areas would be restored after construction. 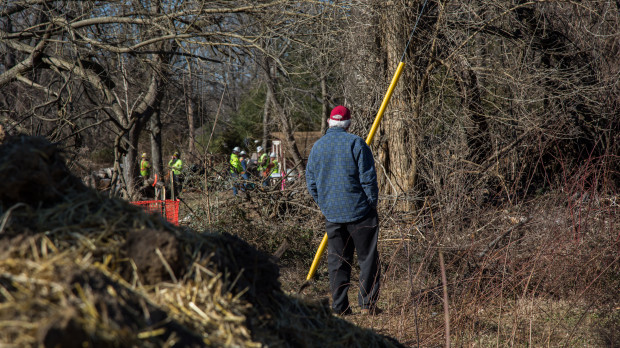 A resident of Aston, Pa. looks on as workers begin building the Mariner East 2 pipeline in Delaware County.

The former DEP official, echoing claims recently made by other pipeline opponents, said the permits were issued because of pressure from Gov. Tom Wolf’s office to approve the documents in time to allow Sunoco to meet its construction schedule which would start operation of the natural gas liquids pipeline by the third quarter of this year.

Sunoco also has to meet a March 31 deadline imposed by the Endangered Species Act, which aims to protect both the Indiana bat and the bog turtle.

The former DEP official said some DEP staffers were threatened with dismissal from their jobs if they did not approve the permits.

David Hess, who was secretary of the DEP from 2001-03, said he was not familiar with the specifics of the Sunoco project but that in general it would not be unusual for the department to impose permit conditions to compensate for deficiencies in an application.

Construction began shortly after the permits were issued but opposition persists in the form of legal challenges and efforts by some communities to assert local control over where the pipeline may be built. Some critics argue that the line, which will carry highly volatile propane, ethane and butane, poses a safety risk, especially in densely populated areas.

Allegations that the Governor’s office directed DEP to issue the permits despite the deficiencies has led to a scheduled meeting between a bipartisan group of state lawmakers and the DEP’s Acting Secretary, Patrick McDonnell, on March 22.

The meeting was called by Rep. Leanne Krueger-Braneky, a Delaware County Democrat, who said she wanted to hear from McDonnell about how, or whether, Sunoco had corrected hundreds of deficiencies in its application.

“When I found out that the permits had been granted, knowing that there had at one point been up to 500 pages of deficiencies, I followed up with the secretary right away to ask him to explain to me how they had been able to rectify all of those deficiencies,” Krueger-Braneky told StateImpact.

“I have a responsibility as a legislator who represents constituents who are in the path of the pipeline to ask these questions and to fully understand the technical review process that the department did go through,” she said.

Asked whether any deficiencies may remain, Krueger-Braneky said she wants to understand what happened between Dec. 5, when Sunoco submitted its revised applications, and Feb. 13, when the permits were issued. 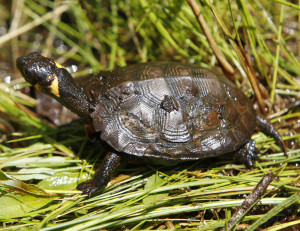 Bog turtles, a federally listed endangered species, hibernate during the winter. Construction that could disturb their habitat must be conducted before March 31.

“I don’t think anybody knows that for sure right now, that’s why I requested the meeting,” she said. “I don’t know that anyone outside of the Department staff and Sunoco knows what happened in between. If the permit applications were deficient, they should not have been issued.”

Rep. Christopher Quinn, a Delaware County Republican, said he will attend the meeting because of pressure from members of the Middletown Coalition for Community Safety, a local anti-pipeline group, who claim DEP was pressed by Gov. Wolf’s office to approve the project despite its technical shortcomings.

“If the governor prodded this thing through, then the public has a right to know that,” Quinn said.

Quinn said he wants to be sure that DEP officials “dotted all the I’s and crossed all the T’s” before issuing the pipeline permits.

Gov. Wolf has previously said that the DEP should ensure that all regulatory requirements should be met before permits were issued. His spokesman, J.J. Abbott, said Friday that the record “makes clear the permits issued by the Department are compliant with all applicable statutes and regulations.”

Alex Bomstein, an attorney for the Clean Air Council, which argued for the three environmental groups before the Environmental Hearing Board in February and early March, said the DEP added conditions to its permits in an effort to make up for the deficiencies.

“I think it’s clear both from the witnesses and from the records of decision that upper management at DEP simply accepted a deficient set of permits and then put in toothless permit conditions in an attempt to make the deficient permits look acceptable at the back end,” Bomstein said.

He said some of the deficiencies may have been corrected shortly before the permits were issued but that the majority were not. “DEP just stopped pressing and accepted non-answers from Sunoco,” he said.

But Lynda Farrell, with the Pipeline Safety Coalition, after reviewing some of the permits says the conditions listed are not unusual.

Sunoco spokesman Jeff Shields noted that Judge Bernard Labuskes of the Environmental Hearing Board ruled on March 3 that the company had met regulatory requirements when he denied a request by the three environmental groups to halt construction pending their appeal of the permits.

“The finding was that the permits as issued, which incorporated the applications, went above and beyond regulatory requirements,” Shields said. “The judge’s decision speaks for itself.”