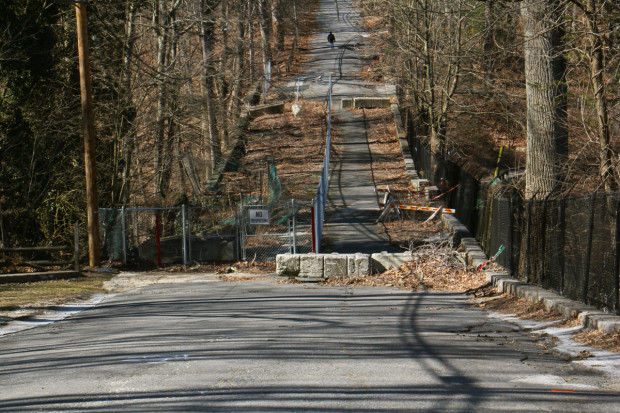 Third Street in Media, Delaware County, which passes over the Broomall Lake Dam, is closed to traffic.

Pennsylvania environmental officials are holding a public meeting Wednesday to discuss developments on a decades-long effort to rebuild a crumbling dam in Delaware County.

It comes just over one week after concerns about eroding infrastructure at the Oroville Dam in Northern California forced more than 180,000 people to evacuate their homes.

The Broomall Lake Dam in Media, Pa. was built in the early 1880s for harvesting ice from the lake upstream. One hundred years later, in 1980, the U.S. Army Corps of Engineers warned it had become unsafe. In 1996, the Third Street Bridge that runs above it was closed to vehicles. The bridge is still open to pedestrians.

Decades later, efforts to repair the dam have been held up by legal battles over who owns it and whether to change the roadway above to a one-way street. The bridge is maintained by the borough of Media, while the land on the lake side is owned by Broomall Lake Country Club and the downstream side is a 33-acre county park.

On Wednesday night, a public meeting will focus on the Pennsylvania Department of Environmental Protection’s plan to remove about 10 feet off the top of the earthen dam — what the DEP calls a “partial breach” — so that it’s holding back less water. The DEP said this will lessen the threat of the dam breaking, a temporary solution while waiting on a final plan to rebuild it.

“Upon completion of the partial breach, the potential threat to downstream residents will be reduced significantly,” the DEP said in a press release. 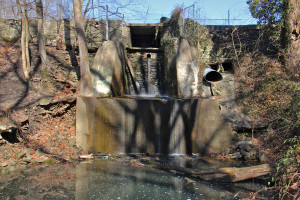 While the consequences of the Broomall Lake Dam failing would involve far fewer people and homes than the situation in California, it’s emblematic of the larger infrastructure problems plaguing states like Pennsylvania.

The dam is considered “high hazard,” meaning failure could cause serious harm to people and property. If the dam were to fail, water from Broomall Lake would flow into the park and flooding could damage a small number of homes on Ridley Creek Road. According to a 2014 analysis from the American Society of Civil Engineers, 23 percent of Pennsylvania’s dams are “high hazard.” Last year, a study from the American Road & Transportation Builders Association found one in five of the state’s bridges are “structurally deficient.”
“The fact that it was considered unsafe back in 1980 just shows how long it has taken and it’s a huge responsibility to maintain a dam,” said Stephanie Gaboriault who lives near the Broomall Lake Dam. “People’s health and property are at stake.”

Gaboriault is president of Friends of Glen Providence Park, which is adjacent to the dam. The group has long advocated for removing it entirely and allowing the lake to become a smaller stream. 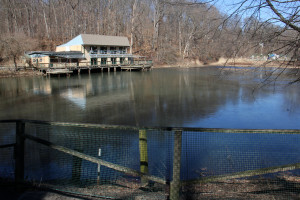 Until recently, Gaboriault said there was a water main and a natural gas line running through the dam.

“Back when there was Hurricane Sandy and that kind of thing, we were very nervous,” she said. “I remember calling the DEP and saying, ‘What do I do if the dam fails and I think there’s a natural gas leak and how far away do you have to be to worry about lighting a candle if you lose power?”
According to the DEP, the partial breech project is scheduled to begin in mid-April and will take about two months.
Wednesday night’s meeting starts at 6:30 p.m. at the Media Borough Municipal Building, 301 N. Jackson Street.