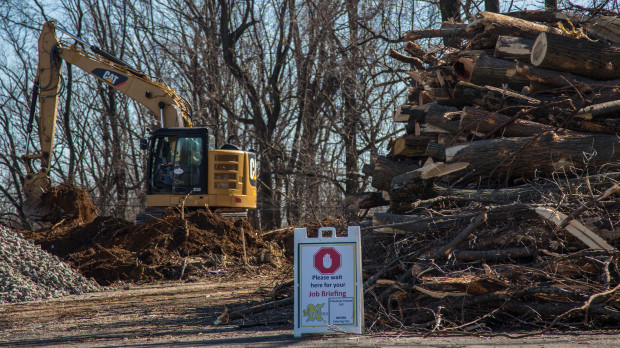 The Mariner East 2 pipeline has officially broken ground in the Delaware County town of Aston. The beginning stages of the pipeline includes clear cutting trees and preparing makeshift roads for the heavy machinery to traverse.

Workers cleared trees and built drill pads in Aston in Delaware County and Raystown Lake in Huntingdon County, the first two sites to see construction activity along the 350-mile route from southwest Pennsylvania to Marcus Hook near Philadelphia, according to Jeff Shields, a spokesman for Sunoco Logistics, which will build and operate the line.

At the Aston location on Monday afternoon, a backhoe was clearing tree trunks and branches while a mechanical scoop was building a base for a drill pad that will create an underground path for part of the line. A stack of previously cut trees lay nearby. 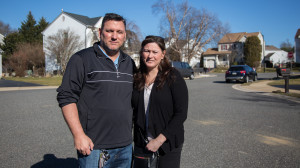 Mike Flaherty and his wife Theresa are unhappy with what they call "shady behavior" from Sunoco and their contractors. The line was to go through their property, but when they asked for information about safety and property values, Sunoco re-routed the line to a neighbor's property.

The activity was an early sign that construction was actually taking place after years of protest by opponents, especially those in Delaware County, who question Sunoco’s assurances that the line will be safe. Some landowners have refused the company’s compensation for building the pipeline on their land, and are fighting eminent domain actions in the courts.

Mike Flaherty, who lives within a few yards of the pipeline route in Aston, said he’s worried about the possibility of leaks from the pipeline, and is concerned that the value of his house will be hurt.

Flaherty, 50, said Sunoco first wanted to take about 10 feet of his property for the pipeline, and offered him compensation for an easement but he refused because he was worried about leaks and the effect they might have on his three children – two of whom are asthmatic – and his wife, Theresa.

“My wife and I had questions about safety, environmental concerns, and we don’t think they were answered appropriately,” he told StateImpact in an interview in the driveway of the home where he has lived for 20 years.

Eventually, Sunoco agreed to route the pipeline away from his property but the route, which would have crossed his back yard, is still only about 20 feet from his house.

Flaherty said he’s also concerned about whether proximity to the pipeline will hurt the value of his home, although he said he is not actively trying to sell the house. 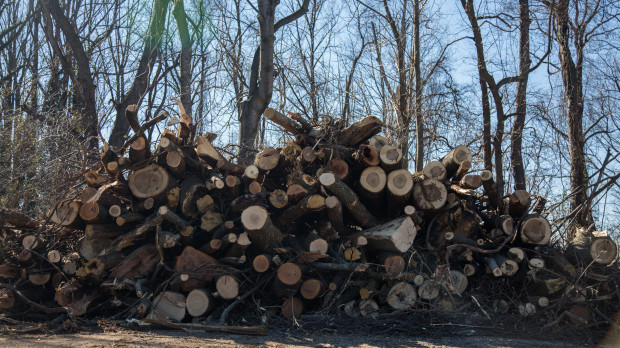 A pile of recently cut trees in Aston, Delaware County, cut to make way for the Mariner East 2 pipeline. Sunoco argued in court recently that they needed to make an April 1 tree-cutting deadline in order to avoid the endangered Indiana bat.

Flaherty’s neighbor, Dale Arnold, 27, said he hadn’t been told anything about the pipeline by the company or by local officials, and was surprised to see the preliminary construction activity within sight of his house.

Arnold, who said has lived in his house for 24 years, asked a reporter what the pipeline will carry and who had approved it.

“I just don’t understand what’s going on,” he said. “They didn’t notify any residents as to what’s happening.

But Keith Flickinger, whose property backs on to the pipeline route, said Sunoco had kept him informed about its plans for the $2.5 billion pipeline over the last two years, and he accepts the need to pump natural gas liquids across the state, even if that means close to people’s homes.

“I think it’s safer to transport it underground than it is by railroad car,” he said.

Flickinger, 55, a retired construction contractor, said he had received four communications from Sunoco about its plans, including two certified letters. “They have been around four times, and I talked to the gentleman, and he answered my questions,” he said. “What more could a guy ask for?”

Critics of the pipeline, including the environmental group Clean Air Council, are asking a judge to reconsider his denial last week of their request for a temporary halt to construction.