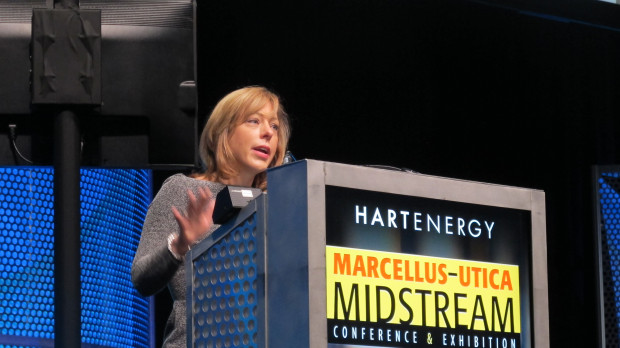 Denise Brinley, with the state Department of Community and Economic Development speaking at an industry conference in Pittsburgh Thursday.

The Appalachian region could support up to four more petrochemical processing plants, known as crackers, according to a forthcoming report from IHS Markit.

Denise Brinley, a special assistant to the Secretary of the state Department of Community and Economic Development, previewed the report Thursday during a presentation at the Hart Energy Marcellus Utica Midstream conference in Pittsburgh. She says it will be published in the next few weeks.

The report will outline the potential ways Pennsylvania’s shale resources can remain closer to home, says Brinley, in order to provide greater benefits to the Appalachian region. It is being produced in conjunction with the Team PA Foundation, a public-private entity engaged in economic development.

“We are currently exporting 100 percent of our [natural gas liquids] out of the state,” says Brinley. “But we’re sitting in a premier spot right now. We can produce products cheaper than pretty much anyone else in the world. We’re within 700 miles of 73 percent of the targeted plastics manufactures in the U.S.”

Brinley says she doesn’t believe most Pennsylvanians understand the extent to which the state’s shale resources are leaving its borders, and calls Shell’s decision last year to build a multibillion dollar ethane cracker in Beaver County a game-changer for the entire region. The project is expected to create thousands of short-term construction jobs and about 600 permanent jobs. Under the previous administration, the project was granted the largest tax break in Pennsylvania state history.

“The most important thing we can do is to spread this message far and wide, because there is a huge audience that needs to understand this,” says Brinley. “We need to speak to those regions that can benefit and grow.”

Brinley says following the publication of the report, DCED will be assembling an internal strategy to support the development of natural gas liquids resources. She says increasing plastics manufacturing is a major priority.