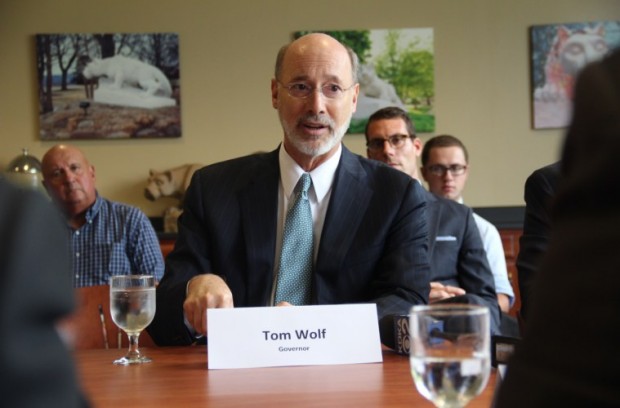 Gov. Tom Wolf hosted a roundtable discussion in Beaver County Thursday to tout the economic benefits of the ethane cracker plant Shell is planning to build.

Note: This story is from The Allegheny Front, a public radio program covering environmental issues in Western Pennsylvania.
Governor Tom Wolf was in Beaver County Thursday to tout the economic benefits of Shell’s multi-billion dollar ethane cracker and discuss the challenges ahead in building it.
Wolf spoke at what his office called a “roundtable” with local elected leaders and economic development officials.
The governor said the project will mean that Pennsylvania isn’t just an exporter of raw materials to other states, but will be using its own natural gas to build a new manufacturing base.
But not everything about the project will be easy, Wolf said. Case in point: how to make sure locals — not out-of-staters — are hired to build the plant. At its peak, the construction of the cracker will employ 6,000 workers.
A key to helping the project succeed, said Wolf and others at the meeting, will be making sure the region can supply not only a skilled workforce — but one that can pass the industry-standard drug test.
Asked if the jobs to build the plant would go to Pennsylvanians, Wolf said he thought they would.
“The jobs that are going to be created, are jobs that are going to be day-in, day-out jobs,” he said. “(Workers are) not going to be able to come in, live here a couple months and go back home. So I think if we get this right, that these are going to be jobs that stay here.”
Wolf said former Gov. Tom Corbett, who gave Shell the $1.65 billion tax break for the project that helped Shell decide to locate in Pennsylvania, “deserves real credit” for helping land the plant.
Locals plead their case with Wolf for more help from Harrisburg for aid in preparing for the multi-year construction project. Among the asks: things like workforce training, addressing the state’s current drug crisis to keep workers eligible to work at the plant, and ensuring the safety of the locks and dams along the Ohio River.
Wolf also heard pleas from local officials wanting more help with infrastructure like pipelines, which Shell will need to funnel natural gas from the surrounding region to the cracker. The plant will make the building blocks of plastics out of that gas.
“There is something being asked of us now to prepare for that we are not necessarily skilled to meet,” said Rebecca Matsco, chair of the Potter Township board of supervisors.
Wolf said one thing the state could do is make sure the environmental permitting process is made as seamless as possible for Shell. Environmentalists have appealed Shell’s air permit, saying it could make air quality in the Pittsburgh region worse.
“This is going to be all hands on deck. We’ve got to get things movin’, not to compromise on the environment, but to make sure we do it right and as quickly as we can.”
If all goes well, Wolf said, the project would transform Beaver County for decades. “If the cracker plant does what I think it’s going to do, and if we do what we need to do, with the education and transportation, and all the other infrastructure, then these jobs are going to be here for years.”