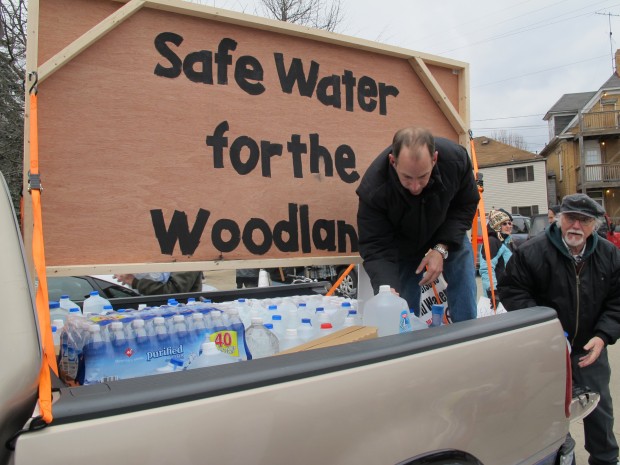 A man helps deliver donations of clean water to residents of Butler County, February, 2013. The residents continue to rely on donated water and say gas drilling polluted their water supply. The DEP investigation found drilling was not to blame.

A community in western Pennsylvania says families are entering their sixth year without clean water and they blame gas drilling. About 50 people living in the rural Butler County community known as The Woodlands, 40 miles north of Pittsburgh, continue to rely on donated water, according to Lee Dreyer, pastor of the White Oak Springs Presbyterian Church in Renfrew.

“Here’s a situation where, in 21st century America there are people, a small population of people granted, but people who are living with unsafe and unclean water in the community and there’s nothing being done about it,” said Dreyer.

Dreyer’s church serves as the distribution point for the weekly water donations, which he says ranges from 300 to 400 gallons that the residents use for drinking and cooking. Several families are currently in litigation over their water and have been advised not to speak to the press. Dreyer says local officials have not helped the families, so it’s up to private individuals to contribute. The Department of Environmental Protection concluded several years ago that nearby gas drilling did not contaminate residential well water.

Water troubles for residents began back in 2011.  First they said their water turned grey then black then brown. The gas driller, Rex Energy, supplied fresh water to the impacted families. But after the DEP concluded the company’s drilling did not impact water quality, the company ended those deliveries in January, 2012.

Today, White Oak Springs Presbyterian Church pastor Lee Dreyer says he sees no end in sight for the home owners, which he says are working poor.

“They just don’t have the resources to pack up and move somewhere else even if it’s with relatives,” said Dreyer. “And they can’t sell the property because of issues with the water.”

He says each family gets 20 gallons of donated water a week, with each gallon costing one dollar.

DEP spokesman Neil Shader said there hasn’t been any recent investigations, and the agency’s original inquiries did not find any impacts related to oil and gas development. “Our report indicated that there may have been too many wells drawing on too small an aquifer,” said Shader.

The gas company, Rex Energy, could not be reached for comment but has said in the past that multiple tests and investigations cleared the company of wrong-doing.