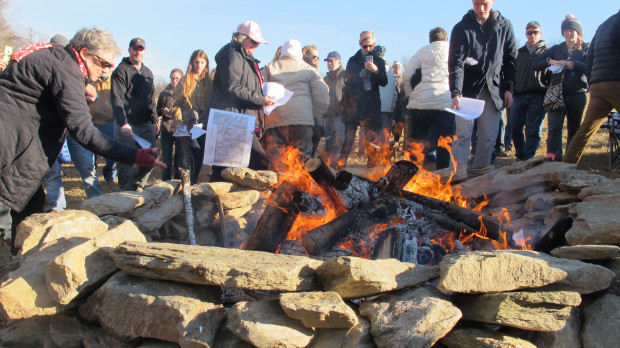 About 200 people gathered in southern Lancaster County Sunday and ceremonially burned the final environmental impact statement for the Atlantic Sunrise pipeline. In the document, federal regulators had concluded the project would not create significant environmental harm.

The group Lancaster Against Pipelines is spearheading the effort. Activists have built two wooden structures near Conestoga, which they intend to occupy if and when crews begin work on the Atlantic Sunrise pipeline.

Williams, the Oklahoma-based company behind the project, expects to receive final approval from federal regulators within weeks. The pipeline recently cleared a major regulatory hurdle, when the Federal Energy Regulatory Commission issued its final environmental impact statement (EIS), and found the pipeline would not create significant environmental harm.

About 200 people attended an event Sunday afternoon where they ceremonially ripped up the EIS and threw it into a bonfire. Pipeline activist Tim Spiese views the entire environmental impact statement as part of a larger process that’s rigged in favor of natural gas companies.

Organizers from at least three other states were in attendance to recruit and train people on nonviolent direct action. Some of them had taken part in the monthslong protest against an oil pipeline in North Dakota with the Standing Rock Sioux tribe. Activists say at least two members of the tribe have pledged to help with an occupation targeting the Atlantic Sunrise line.

The pipeline is designed to carry Marcellus Shale natural gas southward to markets along the east coast and to an export terminal near the Chesapeake Bay.

Williams spokesman Mike Atchie gave a presentation on the benefits of the Atlantic Sunrise line at the Pennsylvania Farm Show in Harrisburg on Thursday and was briefly heckled by a protester.

“If there’s a chance [the activists] try in some manner to block this, we’d work with the local emergency responders and local police to– first and foremost– ensure safety is adhered to,” says Atchie. “We hope we can get to a reasonable time where we can begin construction. We’re optimistic about the prospect to do so in 2017.”