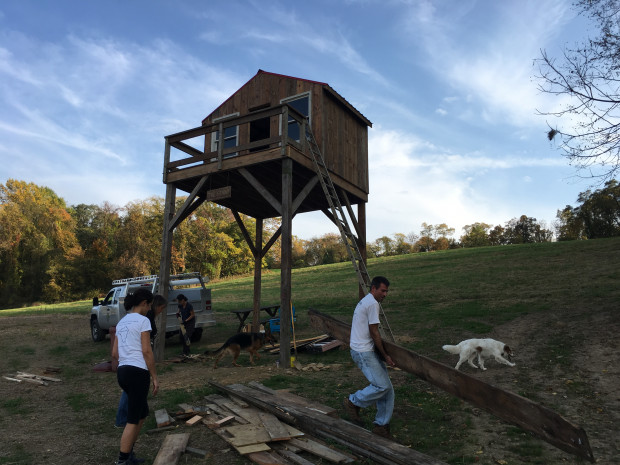 Mark Clatterbuck (right) of the group, Lancaster Against Pipelines, carries woods from the site of what pipeline opponents are calling 'The Stand.'

Opponents of the Atlantic Sunrise interstate natural gas pipeline are building a wooden structure in southern Lancaster County, in an attempt to block the pipeline’s construction. Mark Clatterbuck of the group, Lancaster Against Pipelines, says they were inspired by Native American groups’ opposition to the Dakota Access oil pipeline earlier this year. He says the structure will serve as a place for people to come together.
“Our whole point is to say, ‘We’re not going to let you come through,'” he says. “This is a blockade for the project. We want to derail the project.”
Nicknamed “The Stand,” the structure is located on a farm in Conestoga, in the path of a proposed route. The group plans to hold a dedication ceremony Saturday.
The $3 billion Atlantic Sunrise pipeline, proposed by Williams Partners LP, has not yet received final approval from federal regulators. It’s designed to move natural gas from northeastern Pennsylvania southward to markets along the eastern seaboard. Clatterbuck says protesters plan to occupy the structure if and when pipeline construction commences.
“We understand there are individuals who have expressed concerns about the project,” says Williams spokesman Chris Stockton in an email. “We’ve also heard from thousands of individuals and groups who support the project because they recognize the important role it will play in growing the state’s natural gas industry, creating consumer access to an abundant supply of clean, affordable energy while delivering significant state and local economic benefits.”
In recent years there has been a big push to expand the region’s network of pipelines, as Pennsylvania gas producers face record low prices and infrastructure related supply constraints. More gas is also needed for electric power generation, as coal-fired plants retire.
A final decision on the Atlantic Sunrise is expected from the Federal Energy Regulatory Commission (FERC) in the spring. The project has already received preliminary approval. In May, the commission issued a draft environmental impact statement saying the pipeline would not create significant adverse impacts.
FERC was supposed to issue its final environmental impact statement October 21, but said Thursday it would delay the release and extend public comment. The final EIS is now expected December 30. The move follows a minor route change request by Williams. Some Lancaster County residents have also asked to have the route moved back to the original plan, closer to existing utility right-of-ways.