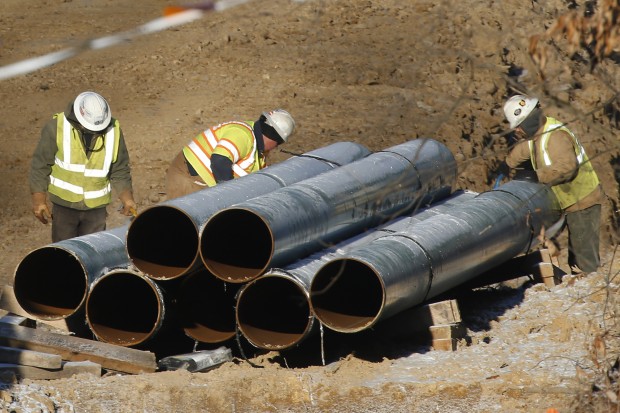 Federal regulators published a new set of rules on Friday to strengthen the safety of pipelines carrying hazardous liquids such as crude oil and the natural gas liquids that would be pumped across Pennsylvania by the planned Mariner East 2 pipeline.

The U.S. Pipeline and Hazardous Materials Safety Administration said operators of the approximately 200,000 miles of hazardous liquids pipelines across the U.S. will have to perform more frequent inspections, extend inspections outside so-called high-consequence areas, and install leak-detection systems on all pipelines.

The measures also include extending reporting requirements to gathering lines – those that connect well-heads to larger transmission lines – that are not currently regulated by PHMSA.

The new rule strengthens the standards for the maintenance of ageing and high-risk infrastructure, increases the frequency and quality of tests, and extends leak-detection requirements, the agency said.

“The changing energy environment in the United States requires that we all become increasingly anticipatory, predictive, and prepared for emerging risks,” said Administrator Marie Therese Dominguez, in a statement. “This is a forward-looking rule – it pushes operators to invest in increased data capabilities, to continuously improve their processes to assess and mitigate risk, and strengthens our framework for strong prescriptive regulations.”

A spokeswoman for PHMSA said liquefied butane, propane or ethane, as planned by Sunoco Logistics for the Mariner East 2 line, would be classified as “highly volatile liquids” and would be covered by the new rules. Hazardous liquids also include petroleum and its products, ethane, and anhydrous ammonia.

Public worries about the safety of the Mariner East 2 line, which is scheduled to begin operation in the third quarter of this year, have prompted municipal statements of concern in some communities at the eastern end of the route. Critics say residents would be exposed to toxic or explosive gases in the event of a pipeline leak or rupture.

Sunoco spokesman Jeff Shields was not immediately able to comment on whether the pipeline would be affected by the new rules.

The rules will require pipeline operators to inspect pipelines that have operated under extreme weather conditions such as hurricanes, to make sure the lines can operate safely after such events.

They will also have to conduct “integrity assessments” on lines outside high-consequence areas (HCAs) at least once every 10 years, in addition to the current requirement to do such inspections for lines inside those areas once every five years.

Leak-detection systems, currently required in HCAs only, will be required in all hazardous liquids pipelines, while all lines in those areas will be expected to be equipped with interior inspection equipment within 20 years.

The oil industry’s main trade group, the American Petroleum Institute, said the rules would require operators to attach the same priority to all areas, whether they were classified as high-consequence or not, and that could result in lowering overall safety standards.

“While this rule is an improvement over previous versions, the agency’s one-size-fits-all approach creates situations where industry will be forced to redirect its attention away from areas that present higher risks to those that are lower in risk,” said API Midstream Group Director Robin Rorick, in a statement.

It “makes little sense” to issue a rule that may inhibit operators’ ability to build safe pipelines, Rorick said.

PHMSA estimated that as many as 471 pipeline operators will incur costs to comply with the rule, and that the annual cost of compliance with all the new requirements will be $17.6 million across the industry.

“This rule is primarily designed to mitigate or prevent hazardous liquid pipeline incidents,” the agency said. “The benefits of prevention include avoided injuries and fatalities, cleanup and response costs, property damage, product loss, and ecosystem impacts.”

The long-awaited rule reflects the recent sharp growth in U.S. domestic oil production and the consequent demands on the pipeline system.

“The significant and expected growth in the nation’s production and use of oil is placing unprecedented demands on the nation’s pipeline system, underscoring the importance of moving this energy product safely and efficiently,” the agency said.

Sen. Scott Wagner officially kicks off his campaign for governor