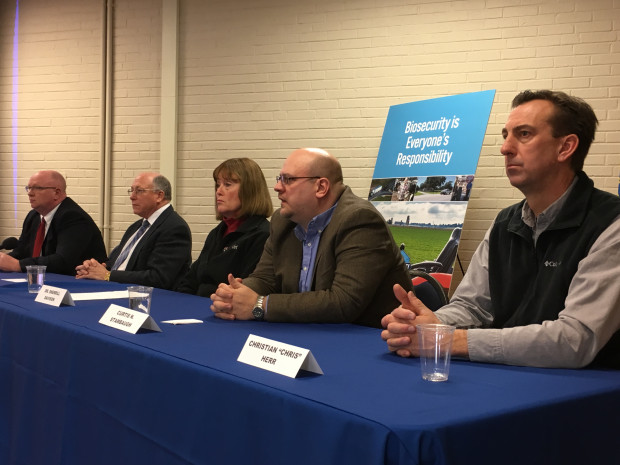 On Wednesday PennAg Industries and Sunoco Logistics unveiled a new online training tool designed to raise awareness about threats like the avian flu.

Pennsylvania’s natural gas pipeline building boom is happening mostly in rural areas, which is one of the reasons representatives from the oil and gas industry were at the 101st Farm Show in Harrisburg this week.

They kept a relatively low profile though, and tried connect with farmers– about issues ranging from eminent domain, to stopping the spread of the avian flu. Two forums were held, and although they took place inside the Farm Show complex, they were sparsely attended and neither appeared on the official schedule.

Another thing you didn’t see, was the Marcellus Shale Coalition, handing out its annual $5,000 check to the Farm Show Scholarship Foundation. Coalition president Dave Spigelmyer says money has been tight lately.

“We still remain active and a number of our companies do support for the farm show,” he says “But we haven’t had the dollars to spend as a coalition to do major sponsorships.”

Low natural gas prices have led to a sharp decline in drilling. Statewide oil and gas companies shed about a third of their workforce over the last couple years. But this is just a temporary lull, according to many in the industry. They say, what they really need now is pipeline infrastructure to move the gas to new markets in the United States and overseas.

It’s sparked a backlash in some places. Opposition groups have sprouted up, challenging pipeline companies seeking to use eminent domain. Phil Stober is an organic farmer in Lebanon County; he spoke out against the proposed Mariner East 2 pipeline, which is designed to move natural gas liquids from western Pennsylvania to an export terminal near Philadelphia.

“Why should the people who own some of the finest non-irrigated farmland in the world have it taken by eminent domain, for a company selling ethane for plastic production to the Europeans?” 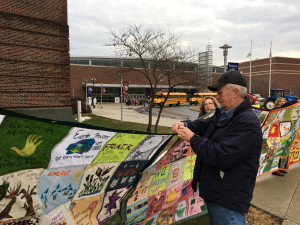 About a dozen people came to protest gas pipelines outside the Farm Show Complex Thursday.

Stober was one of about a dozen protesters who gathered outside the Farm Show complex Thursday morning. A few of them went inside to attend a panel discussion on pipelines hosted by the Pennsylvania Grange, where industry representatives were speaking to farmers. Although there were no confrontations, there was a heavy law enforcement presence, with seven state troopers watching over an audience of about 40 people.

Stephanie Catarino Wissman of the Associated Petroleum Industries of Pennsylvania was among the panelists, along with a representative from pipeline company Williams, and a Harrisburg attorney who works on eminent domain issues.

“We always have a role to play at the Farm Show,” says Wissman. “So this year, our participation was the Grange event.”

During the question and answer portion, farmers asked about the use of eminent domain, and why companies can run pipelines through preserved farmland. Some were also upset that a pipeline crosses their property, but they can’t tap into it and use the gas.

But Dale Shupp spoke up and said he’s been farming successfully over a pipeline right-of-way for five years, and considers the gas industry a blessing that’s helped save many farms near his home in Wyoming County.

“Farmers that were about ready to go out of business are now in business,” Shupp told the panel. “The machinery dealers are making money, because they’re selling new equipment.”

The second forum was a about bio-security. On Wednesday PennAg Industries and Sunoco Logistics unveiled a short, online training tool aimed at raising awareness about threats like the avian flu. Dr. Sherrill Davison, of the School of Veterinary Medicine at the University of Pennsylvania, spoke about the avian flu outbreak in 2015 in the Midwest.

She cautions everyone going onto a farm –whether it’s a pipeline contractor or a postal worker– to take precautions by cleaning themselves and their gear.

“We lost, around the United States, 48 million birds,” Davison says.  “With billions of dollars of losses.”

Sunoco Logistics’ assistant general counsel, Curt Stambaugh, grew up on a farm in Maryland and helped the company develop the training tool, after hearing concerns from farmers.

In fact, fears about an avian flu outbreak kept poultry from the Farm Show last year, but the birds were back this year. Stambaugh says Sunoco intends to share the training program widely within the industry.