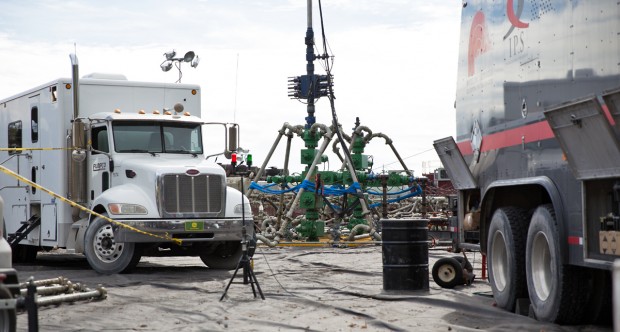 A hydraulic fracturing site in Susquehanna County, Pa. The central missile of the fracking operation connects 16 compression generators, water, sand, and other fluids before entering the well.

The EPA says its fracking study, published this month, is the most comprehensive look so far at all the science available on whether or not fracking pollutes drinking water. Critics have pointed to a lack of data in the report, which led to limitations in the agency’s conclusion that fracking “impacts drinking water under some circumstances.” The EPA’s science advisor Tom Burke says the gaps in data represent the “state of the science.”
“The identification of data gaps is actually an important contribution to the science and not a failure,” said Burke.
“We are really just beginning to understand fracking,” he said.  “And there are not really a lot of reports about what’s going on during the fracking process. For instance, basic information about where are the wells? The location of the wells.”

Burke says that in addition to lack of information about all the shale gas wells, there is a lack of information about locations of groundwater aquifers, and the quality of the water.
For a decade, Pennsylvania residents living in shale gas areas worried that fracking could pollute their water. The state has found more than 250 cases where shale gas drilling and production did contaminate drinking water. In 2010 Congress ordered the EPA to investigate.
When the EPA announced its sweeping, national study, the agency said it would look at the fate of water during the entire gas drilling process, from the moment water gets withdrawn, to the chemical additives, to the injections into the wells to the wastewater transport and disposal. 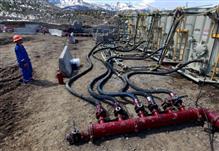 The agency used the northeastern Pennsylvania town of Dimock as one of its case studies. Dimock had garnered international headlines and drew visitors and protestors from around the world after gas drilling led to dangerous levels of methane migrating into some resident’s drinking water. Residents also suspected other toxic chemicals from the gas operations had leaked along with the methane.
Back in 2012, Dimock resident Victoria Switzer described her experience to StateImpact. Like a lot of people who live near fracking in rural areas, Switzer got water from a well in her backyard. But soon after the gas wells went in, she said her water turned black, then orange. Then one day it was soapy.
“It was foamy and grey and it smelled,” she said. “Richie the neighbor thought it was turpentine, I thought it was perfume like.”
But here’s the thing, there was no baseline water testing done at her home before gas drilling. Without that, it was difficult to prove the gas company polluted her water. Cabot Oil and Gas denied responsibility. The residents relied on donated water and struggled to figure out what was in their well water, and how it got there.
When the EPA announced it would do a study to find out if gas drilling polluted drinking water, Switzer hoped it would answer her questions. Researchers visited her house, sat at her kitchen table, tested her water.
This month, the EPA concluded badly constructed wells, frack water spills, and poorly treated wastewater can contaminate drinking water.  In the case of Dimock, the EPA said poor well construction led to methane migration. But the EPA still can’t say if gas drilling is what turned Switzer’s water all those different colors. And it still can’t say how many people like Switzer there are.
Rob Jackson is a professor at Stanford University and has conducted research into the impacts of fracking all over the country.
“I wish the report had more data in it,” said Jackson.
“I wish they had done more work trying to figure out how frequently, how often things happen rather than just talking about what can, could and has happened,” he said. “That’s important but it’s not enough. If the EPA can’t do it, who can?”
Jackson says the gas and oil industry is regulated by the states, not the federal government. So each state has different reporting requirements and that makes it hard to get at the big picture. He also says it can take decades for contaminants to move through underground aquifers, so problems might not show up right away.
“The report says that contamination doesn’t happen most of the time,” said Jackson. “And so far, based on the evidence we have, I think that’s a fair statement. What’s an acceptable risk for you as a homeowner if you’re on a private water well? Is one in a hundred cases an acceptable risk? That’s probably too high for you if you’re raising your kids on water coming up from under the ground. Is it likely? No it’s not. Does it happen? It does.”
The EPA wasn’t able to get industry to cooperate with the study. Eric Milito from the American Petroleum Institute says problems with oil and gas drilling are exaggerated.
“We’re not gonna stand here and say no incidents occur, what we’re going to say is this is a technology that’s been around a long time it’s been successfully deployed, the risks are low,” said Milito.
David Yoxtheimer is a hydrogeologist with Penn State’s Marcellus Center for Outreach and Research. He says he was also disappointed with the EPA’s vague conclusion about the impacts of fracking on drinking water. But he says there is good information in the EPA’s fracking study.
“It is hard to quantify this and put a real probability on it,” said Yoxtheimer. “So it is part of a jigsaw puzzle. I think probably some more pieces need to be added to the puzzle so you can get risk probabilities, which you can have more confidence in.”
After the fracking report came out, StateImpact contacted Victoria Switzer. She is no longer allowed to talk about her water. Like a lot of people who sue gas companies, their settlements prevent them ever discussing what happened. Stanford’s Rob Jackson says that’s an important source of lost data. But Switzer can talk about the EPA study.
“I think it gives them continued reason not to do anything,” said Switzer. “Oh we don’t have the evidence, we don’t have the data. We don’t have the cooperation of the gas companies. Who’s in charge here?”
Switzer still lives in her same house on seven acres of woods in Dimock. She says she’s lost hope that people like her can turn to the EPA for help. If fracking starts up again near her home, Switzer says she may follow in the footsteps of her neighbors and move.