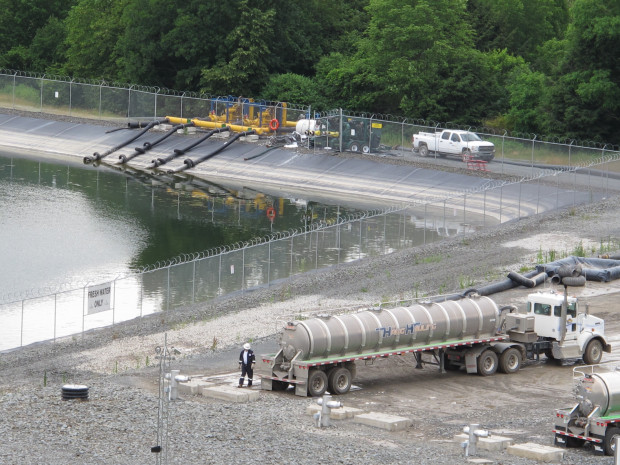 EPA’s fracking study, published this week, was supposed to be the definitive look at whether or not drilling for shale gas and shale oil impacts drinking water. But instead, the final report concluded that fracking impacts drinking water “under some circumstances,” and qualified that conclusion with a discussion about a lack of definitive data. The 666-page report detailed the potential pathways for water contamination and described specific cases where water was polluted, two case studies involved incidents in Pennsylvania. But in the final report, after six years of research, the EPA stressed the limits of their conclusions, something that its scientific advisors had urged them to do after reviewing the draft report.

David Yoxtheimer is a hydrogeologist with Penn State’s Marcellus Center for Outreach and Research. Yoxtheimer says those gaps still leave unanswered questions for researchers and policy makers.
“We were hoping to have some more clarity as to what the potential impacts are from hydraulic fracturing on drinking water sources,” Yoxtheimer said. “And I think we know that there are some potential impacts but we weren’t given a better gage on the probability of those impacts actually occurring.”
Yoxtheimer says it would be useful for regulators and policy makers to know how many wells have had issues, and how many private and public water supplies have been impacted.
“We’re talking about studying a very large area and looking for what may be very localized impacts,” said Yoxtheimer. “So many times, it’s very much a needle in the haystack. So we’re not seeing these widespread systemic impacts that the original draft stated, ok well, it’s not widespread but what are the chances? We still don’t really know that.”
The EPA concluded in both Pennsylvania case studies that surface and groundwater supplies were impacted, if not by the actual hydraulic fracturing process of shooting at high pressure a mixture of water, sand and chemicals deep into the ground, then by a leaking waste water pit, as in the case in southwestern Pennsylvania, and poor well casing, as was the situation in Dimock. Other pathways of contamination highlighted by the study include water withdrawals in times of low water availability; spills involving frack water, wastewater, or produced water; injection of frack water directly into ground water resources; and disposal of inadequately treated waste water into surface waters like rivers and streams.
An important question that critics wanted answered includes what chemicals the oil and gas industry was injecting into the ground, and at what concentrations. Federal regulations exempt the industry from disclosing the information. Pennsylvania does have its own disclosure rules, which have been in effect since 2011.
The EPA used chemical data from FracFocus, a chemical registry site supported by the oil and gas industry, which serves as a clearing house for companies to publicly disclose the chemicals used in the process. Water is typically used as a base for fracking fluid and makes up the majority of frack fluid. Chemical additives comprise just a tiny fraction of the mixture, but it’s what residents find most worrisome should the fluid enter drinking water supplies.
Companies that do disclose the contents of the fracking fluid to FracFocus have the option of omitting ingredients they deem confidential business information. The EPA found that companies increased the rate at which ingredients were labeled confidential between 2011 and early 2015, the time period of the study. FracFocus upgraded its site in 2013 to make it more searchable and user-friendly. Since that period, 92 percent of the disclosures included at least one chemical labeled confidential.

Still, Yoxtheimer says the report does include useful data, including details on Pennsylvania’s water use, waste water management, and recycling.
“It’s a building block,” he said. “We need to collect pre-drilling data, air quality data, water quality data, ecological surveys, then you can start seeing some trends. We have a lot of patchwork data and so it’s hard to piece it together at this point.”