How Pennsylvania's Fracking Chemical Disclosure Rules Stack Up Against Other States 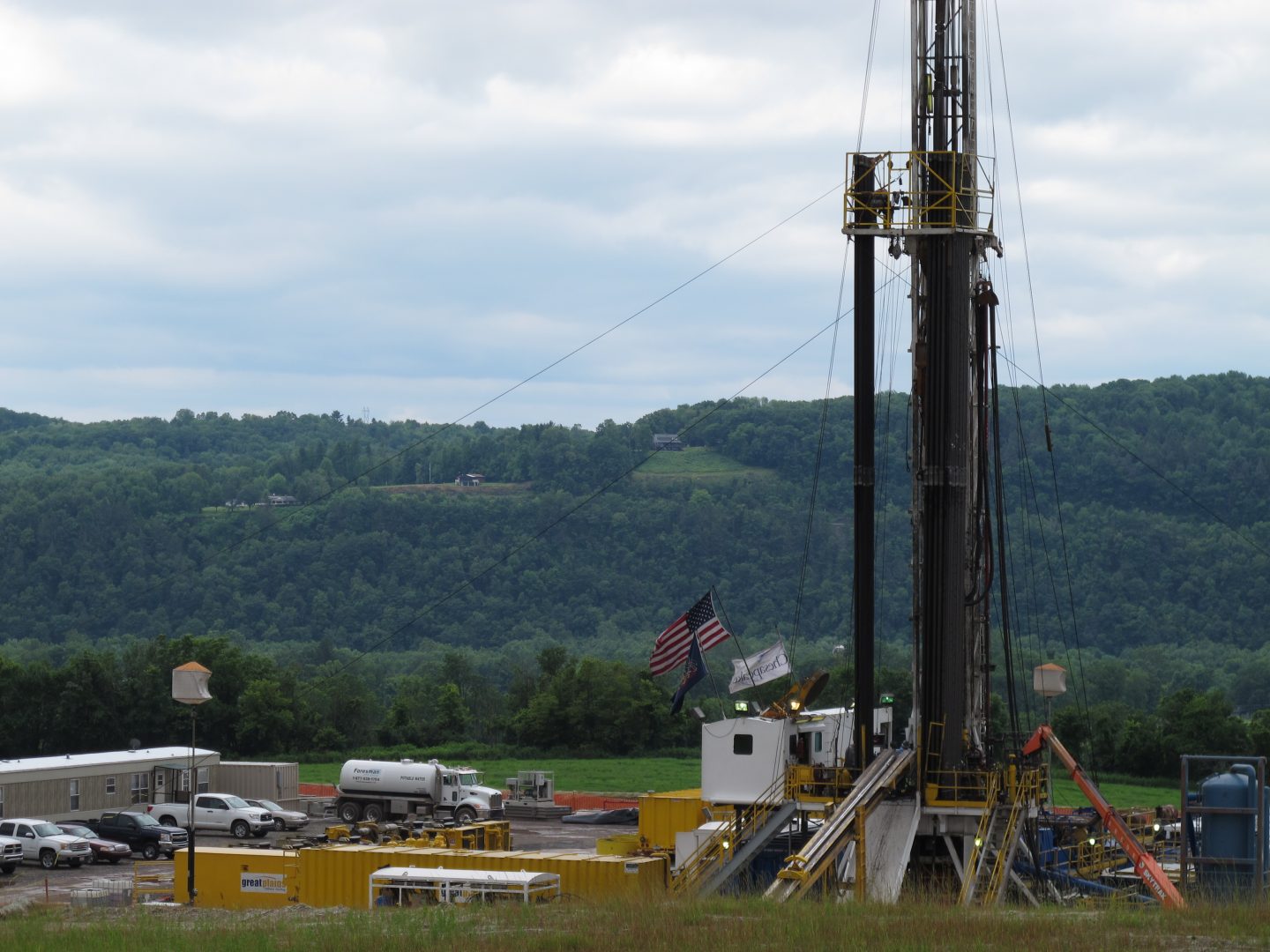 A well in Bradford County

When people hear poisonous chemicals are being shot into the ground, they understandably get nervous. During the early years of the country’s shale drilling boom, there was next to no transparency, when it came the details of chemicals used during the hydraulic fracturing process. But over the past year, Pennsylvania and four other states have passed laws or regulations requiring much more disclosure from drilling companies.
A federal Department of Energy report released this week pressed for immediate well-by-well disclosure of chemicals used during the hydraulic fracturing process. While the energy panel concluded the possibility of fracking fluid polluting drinking sources is “remote,” the report said “public confidence in the safety of fracturing would be significantly improved by complete disclosure.”
Currently, there’s no federal disclosure requirement in place. That’s due to the much-publicized 2005 “Halliburton loophole,” which excludes fracking fluid from federal disclosure rules. Within the past year, Pennsylvania and four other states have passed their own disclosure regulations, requiring companies to report what chemicals they’re injecting deep underground in order to extract natural gas.
A StateImpact analysis of disclosure guidelines in five other fracking states — Pennsylvania, Arkansas, Michigan, Texas and Wyoming — found the commonwealth lagging behind in one key area: public access to the well-by-well chemical information. When it comes to how detailed companies are required to be in listing each fracking chemical, Pennsylvania falls in the middle of the pack.

Where Things Stand in Pennsylvania
Pennsylvania’s disclosure regulations went into effect in February, 2011. Here’s how they work: Within thirty days of well completion, an operator submits a report to the state Department of Environmental Protection, including “a list of the chemical additives used in the stimulation fluid, [and] the percent by volume of those chemical additives.”
For chemicals deemed hazardous by the federal Occupational Safety and Health Administration, the reports go a step further. Companies are required to report those chemicals to the Department of Environmental Protection, and include each compound’s chemical abstract service number. That’s a unique identifier — a fingerprint, of sorts — for the substance used. (OSHA regulations require those hazardous chemicals to be listed at each site, on what’s called a material safety data sheet.)
Once DEP receives that information, it’s reviewed by an inspector and filed in one of the agency’s regional offices. The reports aren’t posted online. One DEP official says the department doesn’t have the technology to do that right now, though the agency is hoping to launch a public database within the next few years. An individual can request the completion reports through the Right to Know process, though he or she won’t be able to view the chemicals operators had designated as “trade secrets.”
UPDATE: Have you ever filed a RTK request to learn what chemicals are in a well near you? We want to hear what the experience was like. Email sdetrow@stateimpact.org.
The Marcellus Shale Coalition, which represents gas drillers in Pennsylvania, is “overwhelmingly on board” with the disclosure regulations, according to spokesman Travis Windle, who said the group would support a move toward posting the information online. Environmentalists want to see a public database, too. “I don’t think we’re quite there yet,” said PennEnvironment’s clean water advocate, Erika Staaf. “[The regulation] needs some tweaking, so not only our…agencies, but really our general public can know what’s going underground, and what’s coming back up.”
Disclosure Regulations Differ in Other States
Wyoming was the first state to pass disclosure regulations. Its guidelines went into effect about a year ago, in September 2010. The state’s rules are stronger than Pennsylvania’s in two respects: First, companies are required to disclose the details of all of their chemicals, not just the compounds deemed hazardous by OSHA. Second, the reports are then posted on the Wyoming Oil and Gas Conservation Commission’s website. And while the state’s website has a labyrinthine mid-90s design, that information is still out there for public consumption.
Steve Jones, a lawyer with the Wyoming Outdoor Council, called the regulations a good first step. “I think there is enough specificity with the requirement that they post the [chemical abstract service numbers]. We do like that about it,” he said. “One problem that bothers me is the trade secrets deal.”
Like Pennsylvania and every other state, Wyoming allows companies to strike certain chemicals off the public list, out of concerns their identity would harm the drillers’ competitive advantage. But unlike in the commonwealth, the Wyoming regulation gives the final say on whether or not a chemical is, in fact, a “trade secret,” to state regulators, not the companies.
Arkansas’ regulations have been on the books since January, 2011, and they’re the strongest of the five states requiring some form of disclosure. The state’s Oil and Gas Commission requires drilling companies to pre-register lists of chemicals they plan to use during fracking, and then file well-specific reports once completion has finished. Abstract service numbers are required for all chemicals – not just hazardous ones – and if a company files a trade secret request, it still needs to list the chemical’s family name. “We have 362 chemicals with CAS numbers that have been released,” said Commission Director Lawrence Bengal. “Only 64 don’t have numbers.”
If a company wants a trade secret exemption, it needs to file a detailed report to the state. Bengal said regulators have rejected or narrowed several of those request. The chemical information is all documented on the commission’s website. “You can search by company, well name, location, or permit number,” explained Bengal.
Michigan recently enacted its own, more limited disclosure regulations, for wells using more than 100,000 gallons of fluid during the fracking process. The state’s Department of Environmental Quality requires drillers to hand over a copy of their material safety data sheets during the permitting process. It doesn’t ask for the chemical abstract number, and lets the companies determine whether or not information is proprietary, but will post the results online. (The state’s director of geological surveys, Harold Fitch, says no wells have qualified for disclosure in the two months since the new rules were enacted.)

Texas Passes First Law
While Pennsylvania, Michigan, Wyoming and Arkansas all require disclosure, the guidelines come from agency regulations, not laws. Texas is the first state to put a disclosure measure on the books, after lawmakers okayed the measure this past spring and Governor Rick Perry signed it into law in late June. The law is similar to Arkansas’ model, though its details are still being worked out.
OSHA-defined hazardous chemicals – the ones posted on those material safety data sheets – will be listed by chemical abstract number, unless they’re designated as trade secrets. All other fracking chemicals will be listed by name. Texas will use FracFocus.org, a website run by the National Groundwater Protection Council, to post the information online.
Like their counterparts in the four other states, Texas environmentalists see the new law as a solid first step, but they’re troubled by some of its provisions. Luke Metzger, the director of Environment Texas, called the trade secrets provision problematic. “The only one who can challenge that is the land owner or a neighbor,” he said. Groups like Environment Texas, an environmental advocacy group, would be barred from appealing a company’s trade secret designation. “The people who own the property [where a well’s being drilled] are being paid,” Metzger said. “They’re likely not going to contest it.”
Trade secret appeals will go to the Texas Attorney General’s Office. “This is an existing process,” said David Blackmon, who leads the American Natural Gas Alliance’s Texas committee, that pushed for the disclosure law. “A process everyone is used [to], and knows works well.”
Many of Texas’ details still need to be sorted out, though. While the law sets broad disclosure parameters, lawmakers are leaving its details up to the Texas Railroad Commission, which regulates the energy industry and public utilities. “The Railroad Commission has to draft regulation,” explained Blackmon. “How the reporting will take place, what the due date is.” The commission has until July 1, 2012 to finish its work, but Blackmon said the goal is to wrap things up by January 1.
Once that’s complete, Blackmon said the energy industry will push for Texas’ first-in-the-nation law to become a model piece of legislation, for other states considering similar measures. “It would be wonderful to have as a model,” he said. “Because…the regulation the Railroad Commission comes up with is going to be the most transparent, expansive one that exists.”
Would a law be stronger than agency-issued regulation? Only if the standards were different – say, if Pennsylvania passed a law requiring the Department of Environmental Protection to post chemical information online. Otherwise, officials in Pennsylvania and other states say current regulations are just as effective. “Rules and legislation have the same enforcement authority,” said the Arkansas Oil and Gas Commission’s director, Lawrence Bengal. “We already have the same legislative authority to adopt a rule like this anyway,” he added, saying a law would give the commission “no increased enforcement.”
The director of the Pennsylvania DEP’s Bureau of Oil and Gas Management, Scott Perry, agreed. “To the extent the legislature wants disclosure within a time frame, that could change things [compared to the current regulations],” he said. “But as far as force and effect, I think it’s the same. If those words [from the newly-revised regulations] showed up in the Oil and Gas Act, nothing would change.”
If Governor Corbett endorses his Marcellus Shale Advisory Commission’s recommendations, things might. In last month’s final report, the panel called for a shift  in the way drillers file well completion reports, so that the documents include a “list of all hazardous chemicals used for hydraulic fracturing,” and are then posted on the Department of Environmental Protection’s website. Public access would bring Pennsylvania in line with the four other disclosure states. It’s unclear whether the recommendation would change the scope of chemicals reported.