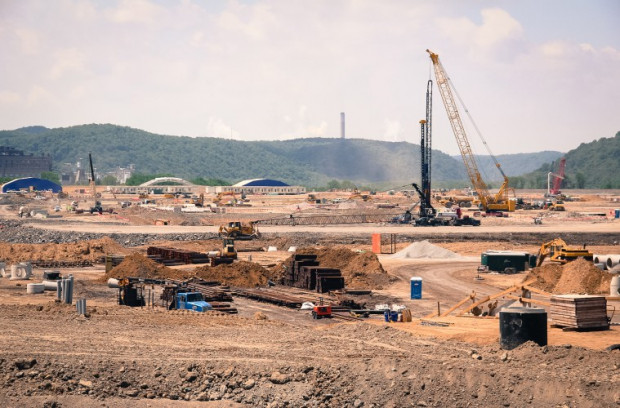 On Thursday, activists asked state regulators to impose strict air and water pollution controls on Shell’s planned ethane cracker in Beaver County. They spoke at a Department of Environmental Protection (DEP) hearing on the plant’s proposed air and water pollution permits.
Shell’s plant would take natural gas from the surrounding region and create polyethylene, a common plastic. But because the Pittsburgh region doesn’t meet federal air standards, Shell has to meet stricter clean air requirements.
The company needs to buy air pollution credits for three types of pollutants from other plants in the area that have closed down. One problem: It can’t find enough of these credits for a type of pollution known as volatile organic compounds (VOCs). These include hazardous air pollutants, which can cause cancer. VOCs also contribute to smog.
So Shell is offering the DEP a trade: It will buy more credits for another class of compounds—nitrogen oxides—in exchange for a smaller number of required VOC credits.
Mark Dixon, a Pittsburgh filmmaker and activist, thinks the DEP shouldn’t go along. “Especially when you consider we don’t even meet federal air quality standards today—what gall,” he says.
Shell spokesman Michael Marr says the company looked, but couldn’t find any VOC credits close by. “There are VOC credits available, but not within this immediate airshed,” Marr says.
Mark Gorog, air quality program manager for DEP’s Southwest Region, says that as long as federal regulators sign off on it, the maneuver is legal.
Business and labor leaders also spoke on behalf of the company’s project.
“The use of Pennsylvania natural gas is necessary for greater job creation, additional economic activity and eventually more revenue for the Commonwealth,” says Stephanie Catarino Wissman, executive director of the Associated Petroleum Industries of Pennsylvania.
Shell is also asking DEP to modify a water pollution permit first obtained by the site’s previous owner, a Horsehead zinc smelter. Activists say that allows the company to pollute more than if it needed to submit a new permit application.
“Shell is constructing, as DEP admits, a completely new facility conducting different industrial activities,” says Lisa Hallowell of the Environmental Integrity Project.
Marr says Shell has brought “modern-day controls” for stormwater and wastewater treatment to the site, where previous owners “had conducted nearly a century of industrial activities, including lead and zinc processing.”
“The permit amendment will allow those environmental improvements to be transitioned into Shell’s future operational phase,” Marr said in an email.
Dana Drake, environmental engineer for the DEP’s clean water program, says Shell was within its rights to submit a modified permit.
Note: This story is from the Allegheny Front, a public radio program covering environmental issues in Western Pennsylvania, airing on WESA in Pittsburgh and on stations throughout the region.