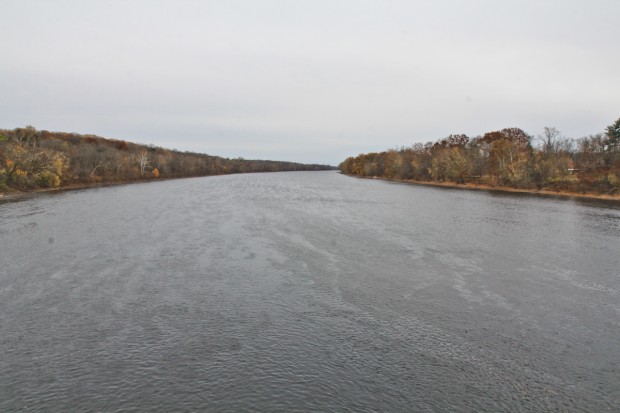 A view of the Delaware River at Washington Crossing Historic Park in Bucks County.

A months-long drought in the Delaware River Basin has prompted officials to declare a drought watch, giving them more power to conserve water in reservoirs in an effort to keep salty water from the Delaware Bay away from drinking water intakes in Philadelphia and New Jersey.
In the current dry conditions, the Delaware River Basin Commission has been releasing water from two Pennsylvania reservoirs in an effort to boost sluggish river flows and keep downstream pressure on the so-called salt front which has been creeping up the river in recent weeks despite the water releases.
Under the new drought watch, announced last week, the DRBC will reduce its target for the rate of flow in the river, as measured at Trenton, allowing it to reserve more water that can be used to repel the salt front if the drought persists.
Even though the reduced water releases might allow the salt front to move higher in the near term, the new policy will give the DRBC more capacity to repel the salty water in future, officials say.
“We do not know how long these conditions will last, and saving water in the reservoirs allows us to repel the salt front for a longer period of time, although it may come a little further upstream,” said Amy Shallcross, Manager of Water Resource Operations at the interstate regulator.
The measures were announced after a special DRBC drought meeting that was originally scheduled for December 14.
Because of the slow river flows, the salt front is 19 miles further upstream than it normally is in November, and is at its second-highest level since the Basin’s “drought of record” in 1963. At the latest reading of River Mile 89 near Philadelphia International Airport, the salt is still 21 miles downstream from drinking water intakes on both sides of the river at River Mile 110 but officials are hoping to prevent it moving any further upstream. The salt front has advanced four miles since mid-October.
“The purpose of the Trenton flow objective is to control the movement of the ‘salt line’ or ‘salt front’ in the tidal Delaware River,” the DRBC said in a statement. “Adequate fresh water flowing downstream is needed to repel the upstream advancement of ‘salty’ or ‘brackish’ water from Delaware Bay to keep it away from drinking water intakes serving residents in Philadelphia and New Jersey and industrial intakes along the river.”
Below-normal rainfall throughout the Basin has depleted reservoirs, cut stream flows and groundwater levels, and dried soils, prompting Pennsylvania, New Jersey and New York to declare drought watches or warnings in 36 of the 42 counties that lie partly or wholly in the Basin.
The DRBC last declared a drought watch in 2010 but it only lasted five days before rains allowed officials to lift the measures. This time, forecasts suggest there’s no early prospect of enough rain to erase the deficit of recent months.
“It feels like it’s going to stay dry and so that’s why we are moving into drought operations,” said Shallcross.
The new measures, which cover the entire Basin from upstate New York to the Delaware Bay, will also allow the DRBC to pump less water to New York City and parts of New Jersey.
Philadelphia Water Department, which obtains about 60 percent of the city’s drinking water from the Delaware River, said it is not experiencing problems with water quality or supply but responded to the DRBC’s action by urging residents to conserve water by measures such as taking shorter showers, fixing leaks, and using low-flow appliances.
“While upstream reservoirs remain at capacities sufficient to maintain appropriate Delaware River streamflow conditions, conservation is necessary now to avoid more serious shortages should drought conditions persist,” the PWD said in a statement.
In the state of Delaware, officials called on residents to conserve water, noting that precipitation in some areas is as much as 50 percent below normal over the last six months.

Do Trump's climate comments signal U.S. will remain in Paris accord?