Do Trump's climate comments signal U.S. will remain in Paris accord? 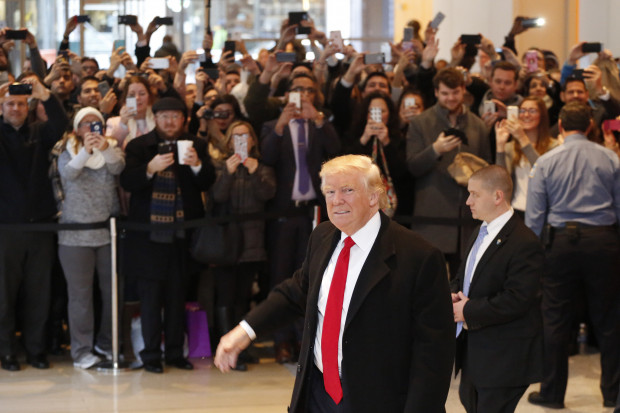 President-elect Donald Trump walks past a crowd as he leaves the New York Times building following a meeting, Tuesday, Nov. 22, 2016, in New York.

Comments by President-elect Donald Trump suggesting that he might not pull out of the Paris climate accord after all fueled some hopes that the latest global effort to curb climate change could retain crucially important U.S. participation.
In an interview with The New York Times Tuesday, Trump refused to repeat his campaign promise to pull the United States out of last year’s historic Paris agreement to curb carbon emissions, saying that he is “looking at it very closely” and has “an open mind to it.” He was also quoted as saying that clean air and “crystal clear water” were vitally important.
The comments, to the newspaper’s editors and reporters, seemed to indicate that the president-elect is reconsidering his previous positions, and offered some hope to climate activists who fear that the efforts by some 190 countries to limit a rise in global temperatures would be gravely hurt by the absence of the United States, the world’s second-biggest carbon emitter.
But some observers dismissed the idea that Trump – who has called climate change a hoax — is backing away from his campaign statements on climate, saying that the president-elect has a record of telling people what he thinks they want to hear.
“Those comments were really a lot of word salad,” said John Quigley, the former Secretary of Pennsylvania’s Department of Environmental Protection. “I don’t think anybody takes anything he has to say at face value.”
“Looking at who he surrounded himself with, and the folks that are under consideration for the Cabinet, I think it is still very likely that he is going to withdraw from Paris and make good on his other promises to deregulate methane emissions, deregulate coal and gas, eliminate federal air-pollution regulations, and de-fund EPA,” said Quigley, now a senior fellow at the University of Pennsylvania’s Kleinman Center for Energy Policy.
Rob Altenburg, director of the Energy Center at the environmental group PennFuture, said he’s not optimistic that Trump’s latest comments signal a change of policy.
“Certainly we hope that the Trump administration honors the Paris Agreement, and that the work continues toward meeting our climate goals, but we’re not seeing actions that give us cause for optimism,” Altenburg said.
Given that Trump has Myron Ebell, an outspoken climate skeptic, as a climate advisor, is not a cause for optimism, Altenburg said. “Having a person with Myron Ebell’s record on climate leading the transition efforts at EPA is a sign that the administration has a long way to go.”

Any decision by the Trump administration to withdraw from the Paris accord would put more pressure on U.S. state and local governments to make their own efforts to cut emissions and prepare for the higher temperatures, bigger storms, and rising seas that are widely forecast to come with climate change in coming decades.
World climate officials meeting at the recent COP 22 talks in Morocco said that local efforts to curb emissions would play a bigger role if the federal government pulls out of the global accord.
On Tuesday, 33 U.S. mayors including Philadelphia Mayor Jim Kenney urged Trump to work with them to curb emissions, arguing that the urgency of climate change elevated the issue above partisan politics. Public support for local climate action was shown by voters’ approval of some $200 billion of climate-related measures in ballots on Nov. 8, the mayors said, in an open letter to Trump.
The letter quoted a U.S. Department of Defense estimate that climate change would cost the United States at least $500 billion annually by 2050 unless emissions are cut.
“The cost of prevention pales in comparison to cost of inaction, in terms of dollars, property and human life,” the letter said. “We believe we can find common ground when it comes to addressing an issue not rooted in politics or philosophy but in science and hard economic data.”
Christine Knapp, director of the City of Philadelphia’s Office of Sustainability, said the cities are hoping that the Trump administration will continue participation in the Paris agreement, and will enact a policy to curb emissions from power plants, even if it scraps the Clean Power Plan specifically.
This story has been updated to add comment from PennFuture and the City of Philadelphia’s Office of Sustainability.