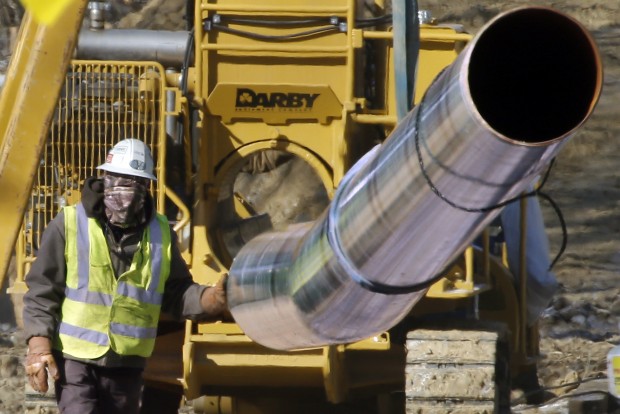 A recent decision by the Federal Energy Regulatory Commission to delay its environmental review of the controversial PennEast gas pipeline may indicate the agency is becoming more responsive to public concern over pipeline projects, but that could be reversed by new appointments to FERC’s board by the incoming Trump administration, analysts said.
FERC last week pushed back the completion date for its Environmental Impact Statement on the proposed 118-mile natural gas pipeline from Pennsylvania to New Jersey until February 17 next year, two months after the previous deadline of December 16. The agency also demanded a lot more information from the pipeline’s builders, PennEast Pipeline Co., after it proposed 33 route modifications.
The delay is the latest obstacle to the project, which would carry gas from the Marcellus Shale in Luzerne County, Pennsylvania, to Mercer County, New Jersey, and which has generated strong public opposition along its route. Critics argue that the line is not needed, would damage the environment, and has not been subject to sufficient public discussion.
The project, and FERC’s response to it, has also been criticized by a number of federal and state agencies. The U.S. Environmental Protection Agency said FERC’s draft Environmental Impact Statement – which concluded that PennEast would have no significant impacts – omitted some information, while questions have been raised by the U.S. Fish & Wildlife Service and the New Jersey Department of Environmental Protection.
In August, critics accused FERC of trying to control public comment on the project when people attending public hearings in both states were restricted to one-on-one conversations with FERC officials. Foes of PennEast initially welcomed the latest delay as a sign that FERC was responding to public pressure.
“Opponents of the PennEast pipeline should take heart that FERC is responding to the overwhelming opposition from the public,” said Tom Gilbert, campaign director for the New Jersey Conservation Foundation and ReThink Energy NJ, a campaign group, in a statement issued before the presidential election results.
But any signs of a more inclusive approach from FERC in its regulation of interstate pipelines could be dashed if President Donald Trump fills two or three vacancies on the five-member FERC board, observers said.
There are currently two vacancies following the departure this year of Commissioners Tony Clark and Phil Moeller. Commissioner Collette Honorable’s term ends in June, 2017.
Rob Altenburg, director of the Energy Center at the environmental group PennFuture, said the Republican President-elect is likely to fill the FERC seats with people who are friendly to fossil fuels and pipelines.
“In the long term, I don’t think any shift we are seeing now is moving towards being friendlier to environmental interests,” Altenburg said. “If this is a trend in an environmental direction in FERC, I can’t imagine that it’s going to last the year.”
Lynda Farrell, executive director of the Pennsylvania-based Pipeline Safety Coalition, said that public pressure appears to be pushing FERC to take a more inclusive approach to pipeline reviews but that’s likely to change under a Trump administration.
“There’s been enough focus by environmental groups on FERC that in demanding more focus on PennEast that they are doing their job,” Farrell said. “But I also believe that with this President-elect, we are going to see pipelines going in the ground all over the place.”
Maya van Rossum of the environmental group Delaware Riverkeeper Network (DRN) said Trump is likely to nominate pipeline-friendly commissioners but argued that they probably won’t make approvals any more likely because of FERC’s long history of giving a green light to virtually every pipeline project that has come before it.
“Given that the commissioners have only rejected one pipeline in 30 years … I’m not thinking it could get any worse regardless of who Trump appoints,” van Rossum wrote in an email.
FERC spokeswoman Tamara Young-Allen said she could not confirm how many pipeline projects have been denied over the years, but noted that approvals may not match the details of projects as originally proposed.
“All commission certificates contain numerous conditions, variations, modifications to the proposal that the commission has deemed necessary to ensure the least amount of environmental impact and the safe operation of pipeline services as just and reasonable rates, as mandated by Congress under the Natural Gas Act,” she wrote in an email.
In March, DRN sued FERC, alleging corruption and bias, and arguing that the agency is unable to make objective decisions about the industries it regulates, including the natural gas industry, because they are the source of its funding.
On Dec. 2, DRN and six other environmental groups plan to hold a “People’s Hearing” in Washington DC, at which participants will speak about what the organizers call FERC’s “extensive history of bias and abuse against the environment.”
The PennEast Pipeline Co. played down the significance of the extended review period and predicted the pipeline will now be operational by the second half of 2018, compared with its original target of 2017.
“While PennEast welcomed the initial December 2016 timeline for receiving FERC’s final Environmental Impact Statement, many variables are factored into proposed timelines of responsible infrastructure projects, including PennEast,” said spokeswoman Pat Kornick. “An additional 60 days for FERC to finalize its environmental review is not surprising.”