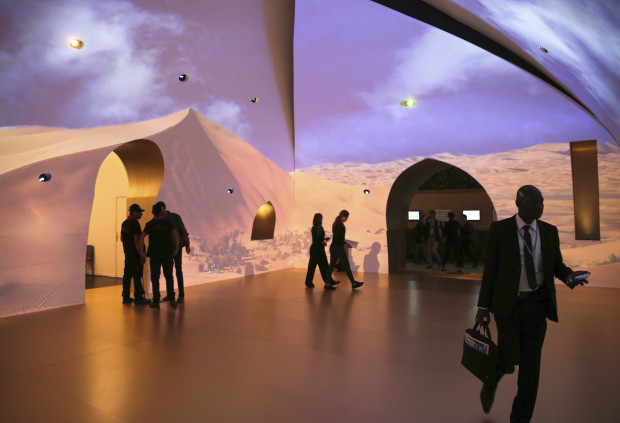 Participants visit the Moroccan section on the second day of COP22, in Marrakech, Morocco, Tuesday, Nov. 8, 2016. Climate negotiators are working on implementing the Paris pact on global warming amid uncertainty over how the election of Donald Trump in the U.S. will impact the landmark deal as temperatures and greenhouse gases soar to new heights#39;ab Elshamy / AP Photo

The election of Donald Trump has created uncertainty among delegates at the United Nations climate talks taking place right now in Marrakech, Morocco. President-elect Trump has called climate change a hoax, and threatened to pull the U.S. out of the historic Paris Agreement ratified a few weeks ago.
Just a couple of days before the start of the United Nations convention here in Morocco, U.S. negotiators were optimistic that the progress made in Paris last year to reduce carbon emissions would continue. The nations had finally come together for the first time to do something about increasing temperatures, rising seas, and melting glaciers.
John Morton, director of energy and climate change for the National Security Council, painted a bright future and seemed excited about the upcoming climate talks, also referred to as COP22, in a pre-conference call with reporters just days before the U.S. Presidential election.
“So I think its fair to say that we are all really looking forward to the COP,” said Morton. “We’re coming into this year’s COP with a tremendous amount of positive momentum. Reaching the Paris Agreement in December of last year was clearly a watershed moment for international climate action.”
Morton had good reason for optimism. The historic Paris Agreement reached last year, aimed at keeping the Earth from warming more than 2 degrees celsius, came after 15 years of failed negotiations. It had been ratified ahead of schedule. The polls showed Hillary Clinton would win and she would continue Obama’s climate agenda.
But with the election of Donald Trump last week, everything changed. 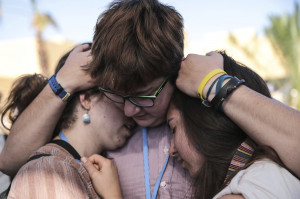 Environmental activists comfort each other during a protest against President-elect Donald Trump at the Climate Conference, known as COP22, in Marrakech, Morocco, Wednesday, Nov. 9, 2016.#39;ab Elshamy / AP Photo

The State Department held a press briefing this weekend on oceans. But the reporters who gathered wanted to know about one thing. How will things change when Trump takes office?
Under Secretary of State for Economic Growth, Energy, and the Environment Catherine Novelli delivered her best diplomatic answer.
“You know I just can’t speculate, I can only tell you what is right now,” she said. “That’ll be for the future to answer but there are definitely market forces and business forces strongly at work and that’s something everyone supports because we support jobs for our citizens and we want our economies to be strong.”
This is what you hear from many negotiators and observers here, that the world doesn’t need the U.S. to soldier on, the rest of the nations can reduce emissions and try to save the planet from the destructive forces of greater warming. They say economics and momentum are in their favor, that utilities and power companies are already on the road toward renewables.
Although the U.S. played a crucial role in Paris, and President Obama reached an historic agreement with China to reduce emissions, the U.S. delegation now suddenly find themselves lame ducks at high level global talks on climate. They will be out of jobs in a couple of months. And its unclear who, if anyone will take their place.
This has the poorer nations at work here in Marrakech particularly worried. The lesser-developed nations agreed to reduce emissions in return for money from wealthier nations like the U.S.
Last year in Paris, the U.S. promised to contribute about $3 billion dollars to the Green Climate Fund to help poor nations. It’s already sent in $500 million.
But Trump has said he won’t honor the rest of that commitment.
Ravi Prasad is India’s chief climate negotiator. And India is important in this deal. It’s one of the largest emitters among developing nations.
“We are not really sure how it will work,” Prasad said. “Global cooperation in one front and global cooperation in another front, they’re all interlinked, so if you don’t cooperate in one front you will find others don’t cooperate in other fronts.”
In other words, if the U.S. pulls out of its agreement to help poor nations adapt to rising seas, then they may find that those other countries won’t reduce their emissions, or won’t cooperate on trade deals, or security.
Alden Meyer is with the Union of Concerned Scientists. He says the election puts the U.S. climate negotiators in a tough position.
“Because everyone understands their negotiating position is not going to be the U.S. position in two months,” he said.
Meyer was at a briefing given by the U.S. climate negotiators to American NGO’s last week.
“I really respect the professionalism and grace with which they’ve operated here since the election,” he said. “They’re really top notch and we actually thanked them, the U.S. NGO delegation actually thanked them with a standing ovation for the work they’ve done over the last eight years.”
There are so many unknowns that many here in Marrakech hold out hope that given a chance, Donald Trump won’t follow through on all his election promises.
Tosi Mpanu Mpanu is the senior negotiator for the Democratic Republic of Congo and the current chair of the Least Developed Countries. It’s Mpanu-Mpanu’s job to get the poorest nations the help they need to prepare for climate impacts. But it’s not just these high level talks about billions and trillions of dollars that keep Mpanu Mpanu up at night, it’s something more personal.
“My daughter is crying at night because she has malaria more frequently because you have mosquitos, which are proliferating,” he said. “Because there is temperature rise…you know, in places where you didn’t even see mosquitos before because it was pretty cold,….now you can see mosquitos. And malaria is there.”
Mpanu-Mpanu says he will turn to other countries to provide funding if the U.S. reneges on its promise. But he holds out hope that Trump can be convinced that climate change is not just threatening people across the globe, but that it’s also putting U-S lives at risk.
Reporting for this story was supported by the International Reporting Project.