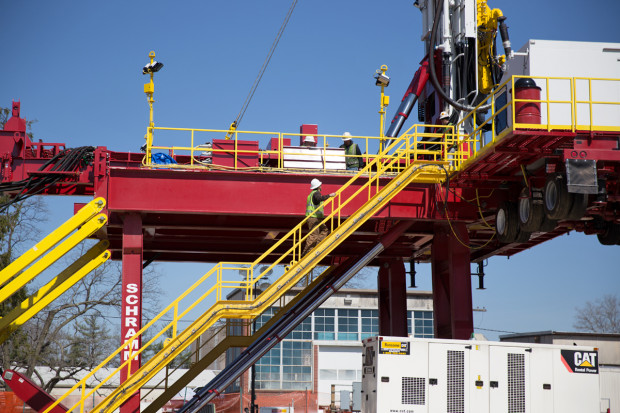 The lawsuit is the latest twist in a protracted battle over the updates to Pennsylvania's oil and gas regulations.

A trade group representing Pennsylvania’s natural gas industry has filed a lawsuit seeking to block portions of new drilling regulations. It’s the latest move in a fierce political battle over the rules, which took effect last week.
The lawsuit was filed in Commonwealth Court Thursday by the Marcellus Shale Coalition. This is the first time the trade group has sued the state, “and we don’t take that lightly,” says its president, David Spigelmyer.
The rules, known as Chapter 78a, represent the first time Pennsylvania’s oil and gas regulations have been updated since the Marcellus Shale boom began. In a conference call Friday morning with reporters, Spigelmyer says the industry does not want to invalidate the entire regulatory package.
“While we’ve worked hard to make sure our input was provided, there are aspects of Chapter 78a that are onerous, costly, and provide little environmental benefit.”
The coalition is objecting to some of the rule-changes that environmental regulators have lauded as the most significant. Notably, the industry is fighting a provision which allows for greater scrutiny of well permit applications near public resources, such as parks, schools, and playgrounds. Spigelmyer argues the state Department of Environmental Protection (DEP) has overstepped its authority.
“Without any written standards or criteria, DEP gave itself sole discretion as to what is considered a ‘public resource,'” says Spigelmyer.
The coalition also objects to rule-changes dealing with spill notification, waste reporting, monitoring of orphaned and abandoned wells, well site restoration, and standards for freshwater storage impoundments.
“These provisions treat oil and gas development far differently than any other earth-moving activity that takes place across the Commonwealth,” says Spigelmyer, who estimates the rules could amount to an additional $2 million per-well cost.
The lawsuit follows a parallel industry lobbying effort to have the legislature change the rules. In July, the state Senate approved a bill that would undo some of the same provisions, but the measure has not moved in the House, and it faces a veto threat from Governor Tom Wolf.
DEP spokesman Neil Shader says the department is still reviewing the Marcellus Shale Coalition’s lawsuit.
“On its face, the filing seeks to have many important protections contained in the regulations stricken or enjoined,” says Shader in an email. “The challenged regulations are commonsense protections, necessitated by Pennsylvania law. They are the result of five-years of work including an unprecedented amount of public comment and involvement.”
In September the DEP got a favorable decision from Commonwealth Court, which ruled the department does have the authority to consider public resources in well permit applications. The decision came in the wake of a separate lawsuit by another oil and gas trade group challenging the regulations, which it has appealed to the state Supreme Court.