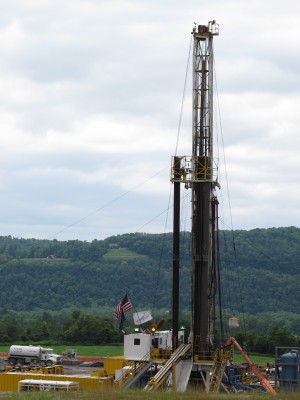 After wending their way through a convoluted, controversial five-year process, new regulations for Pennsylvania’s Marcellus Shale drillers are set to take effect Saturday.
The intense political battle has been unlike anything Kurt Klapkowski has seen in his nearly 23-year career at the state Department of Environmental Protection. Over the years there have been efforts to slow down the process, weaken, and eliminate sections of the rules.
“It’s a highly contentious issue,” says Klapkowski, who directs DEP’s Bureau of Oil and Gas Planning and Program Management. “We tried to be analytical and professional, and divorce ourselves from those political processes as much as possible. It’s been a lot of effort by the department to get to this day. We’re very excited to see this go through.”
The regulations are scheduled to be published in the Pennsylvania Bulletin on Friday. This marks the first time they’ve been updated since 2001. Major changes include tougher standards around waste management and replacing damaged water supplies. The rules also add a requirement for drillers to locate orphaned and abandoned wells before commencing new operations. Another section allows DEP to give greater scrutiny of well permit applications near public resources, such as parks– although that’s currently being challenged by an industry trade group.
Klapkowski says some people may have forgotten, but many changes were directly inspired by the Marcellus Shale Advisory Commission— a group convened by former Republican Governor Tom Corbett.
“A lot of what’s in this rulemaking reflects the work of that commission,” he says. “It’s been a long time coming.”
DEP held 12 public hearings and received more than 28,000 public comments on the rules. Along the way, opponents sharply criticized the process. During a public meeting last year, an industry lobbyist invoked Al Pacino’s performance in Justice For All calling the entire proceeding, “out of order.” The DEP was also criticized by some environmental advocates who argued the rules didn’t go far enough.
The bitter fight even led to the ousting of former DEP Secretary John Quigley, who fired off an angry email to environmental groups last spring asking, “Where the f*ck were you people yesterday?” after GOP-led legislative committees voted to reject the rules.
Only half the regulations survived the battle. New rules for the conventional oil and gas industry were tossed out in June, as part of a budget deal between Governor Tom Wolf’s administration and Republicans. The move led to a widening rift between Wolf and environmentalists. DEP says it has gotten back to work updating the conventional rules– a process which will likely take at least two years.

While global methane emissions are up, study says fossil fuels not the culprit