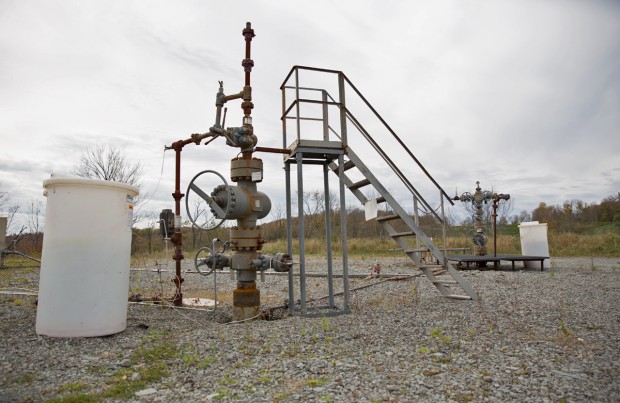 A Pennsylvania appeals court has ruled that the Department of Environmental Protection has the authority to consider the impact of gas drilling wells on public and natural resources including, but not limited to, public drinking water supplies, parks, forests, game lands, habitats of rare and endangered species, historic and archeological sites, scenic rivers, and historic landmarks. The Commonwealth Court ruled 5-2 in favor of DEP, and against the Pennsylvania Independent Oil and Gas Association, or PIOGA, which includes about 550 members primarily engaged in conventional drilling operations.
Acting DEP secretary Patrick McDonnell praised the ruling.
“Today’s ruling is important for DEP’s permitting of oil and gas wells across Pennsylvania,” McDonnell said in a statement. “It unconditionally confirms that the Department has legal authority under Act 13 (the 2012 Oil and Gas Act) to consider the impact that a proposed well site will have on public and natural resources. This decision will assist the Department in its work to ensure responsible development of natural resources in Pennsylvania.”
PIOGA had filed suit against DEP, challenging its authority to consider the impact on public resources when evaluating well permits. PIOGA based its lawsuit on the landmark Supreme Court decision Robinson Township v. Commonwealth, a wide ranging environmental decision that struck down parts of the state’s oil and gas law, Act 13.
One part of that law the Supreme Court clearly struck down is 3215(b)(4), which granted the gas industry waivers from established setbacks to streams and wetlands. The legal question raised in  Thursday’s ruling by the Commonwealth Court is severability, or whether other parts of the law are so connected to the section declared unconstitutional that those too should be struck down.
PIOGA argued that a different section of Act 13, 3215(c), which requires gas drillers to evaluate the impact on public resources in their applications for well permits, is connected to the issue of setbacks and waivers, and should be ruled unconstitutional as well. PIOGA attorney Kevin Moody would not say whether the organization planned to appeal the decision to the Supreme Court. “We are obviously disappointed with this decision and believe the court erred,” said Moody, “and we will be assessing our options.”
Environmental attorney Jordan Yeager, who represented plaintiffs before the Supreme Court in the Robinson case, praised the Commonwealth Court decision.
“It’s essential that DEP has the ability to do its job, which is to protect our public resources,” Yeager said.
John Dernbach, an environmental law professor at Widener University, said the Commonwealth Court decision is a vindication of the original Supreme Court decision on Act 13.
“Because the Supreme Court in Robinson held the commonwealth had a constitutional obligation to protect public natural resources, the Commonwealth Court decision in this case is consistent with Robinson Township.”
Two Commonwealth Court justices dissented, agreeing with PIOGA’s argument, saying that as the Robinson decision is written, the Supreme Court intended to declare unconstitutional several sections in addition to the setback waivers.