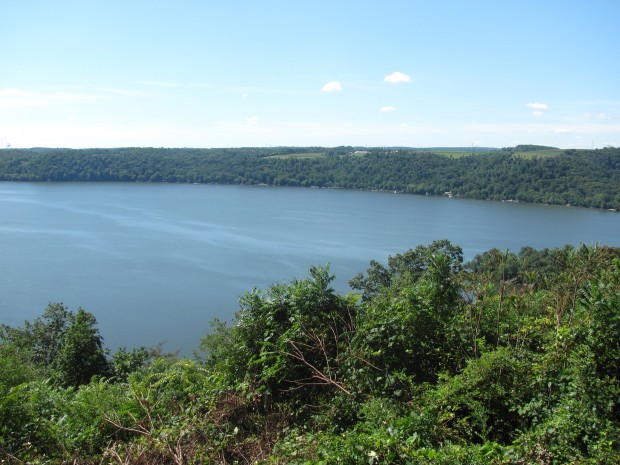 The Susquehanna River: many Pennsylvania water systems contain the carcinogenic chemical chromium 6, according to a new analysis of EPA tests

More than 160 public water systems in Pennsylvania contained the carcinogenic chemical chromium 6 during recent tests at levels that were above a health limit recommended by scientists in California, according to a new analysis of data from the U.S. Environmental Protection Agency.
The study from the Environmental Working Group, a research and advocacy nonprofit, combined previously published EPA data with the health limit proposed by the California Office of Health Hazard Assessment to calculate that 218 million people nationwide, or some two-thirds of the population, are exposed to drinking water containing chromium 6 at concentrations above the recommended California limit.
Chromium 6, better known as the “Erin Brockovich chemical” – after the environmental campaigner who first exposed its damaging effects on human health in the 1990s – was tested for by the EPA using 60,000 samples across the U.S. between 2013 and 2015. The agency found the chemical in 75 percent of the systems, the EWG report said.
The tests found 22 cities with water systems serving more than 1 million people where chromium 6 was at or above a 0.02 parts per billion (ppb) limit recommended by the California panel. The cities included Philadelphia where all 24 samples taken contained the chemical at an average of 0.388 ppb, the sixth-highest of the major water systems, and almost 20 times the proposed California level, the EWG report said.
Other Pennsylvania locations where the chemical was found include the PA American Water Co. system in Norristown, Montgomery County, with an average level of 1.9 ppb, and in PA American Water’s Pocono District in Monroe County which had an average of 0.24 ppb, according to the EPA data used by EWG.
Nationwide, the presence of chromium 6, also known as hexavalent chromium, in drinking water at the levels detected will cause an extra 12,000 cases of cancer by the end of the century, the study said.
Chromium 6, which is used in steel making, chrome plating and, as in the Brockovich case, lowering water temperature in the cooling towers of power plants, has been linked to lung cancer, liver damage, and reproductive and developmental problems.
While the chemical’s levels in Pennsylvania systems, and hundreds of others around the country, topped the level recommended by California scientists, they were below a much higher legal limit of 10 ppb established by that state, the only one to regulate chromium 6 so far.
EWG said the looser legal limit reflected pressure on lawmakers from industry at state and national levels.
“Federal regulations are stalled by a chemical industry challenge that could mean no national regulation of a chemical [that] state scientists in California and elsewhere say causes cancer even when ingested at extraordinarily low levels,” the report said.
The study, published on Sept. 20, also focused on New Jersey where more than 150 water systems were found to contain the chemical at or above the limit recommended – but not adopted — in California. New Jersey follows an EPA guidance limit for “total chromium” – a combination of chromium 6 and chromium 3 – of 100 ppb.
Bryan Goodman, director of product communications for the American Chemistry Council, said the EWG report contained no new data on chromium 6 in the water supply.
Goodman said that when the chemical is found in ground water, it is present at low levels that are well below the EPA’s national drinking water standard. He said there is limited scientific data on how human health could be affected by low, naturally occurring levels of the chemical, and so the Council has supported third-party research into the issue.
“This is a positive example of industry supporting independent, peer-reviewed research to inform regulatory decisions about hexavalent chromium and drinking water,” Goodman wrote in an email.
Bill Walker, who wrote the report with EWG’s Senior Scientist David Andrews, said the group was publishing its analysis as the latest stage of a campaign in which it conducted its own tests for chromium 6 in 35 cities in 2010 and found the chemical in 25 systems at levels exceeding California’s proposed health standard.
“We want people to be aware that the EPA is dragging its feet on setting a national drinking water standard; that the chemical industry and the electrical power industry have delayed that process, and that as a result of industry influence, the EPA might eventually decide to do nothing,” Walker said.
Delaware Riverkeeper Network, an environmental group that advocates for clean water, urged Pennsylvania authorities to adopt their own standard for chromium 6 in drinking water rather than following the federal guidance level.
“Because Pennsylvania does not have an adopted safe drinking water standard for chromium 6 or chromium 3, they follow the EPA guidance, which is unjustly exposing people to the risk of developing disease,” said Tracy Carluccio, DRN’s deputy director. “We need action by government to adopt a mandatory requirement for all water suppliers to remove chromium 6 from our water and for companies responsible for the pollution to clean it up.”
A spokesman for the Pennsylvania DEP says the state does not have a separate chromium-6 standard, instead the DEP follows the EPA 100 ppb total chromium limit.