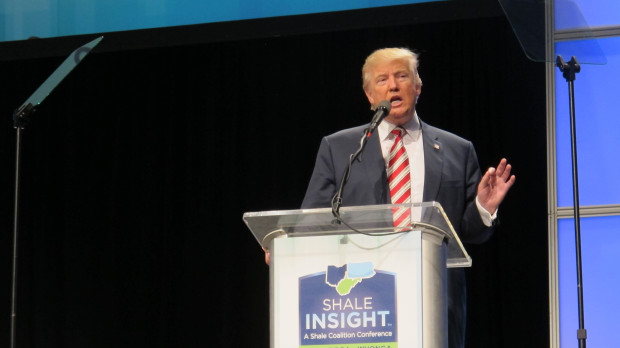 Republican presidential nominee Donald Trump gave the keynote address Thursday at the annual Shale Insight conference in downtown Pittsburgh, hosted by the gas trade group, the Marcellus Shale Coalition.
Trump told the crowd of about 1,200 industry representatives at the David L. Lawrence convention center that as president, he would encourage American energy production and roll back environmental regulations as a way to “make America wealthy” again.
“Regulations are becoming a major industry right now,” said Trump. “We’re going to make it a much smaller industry, maybe a minor industry.”
The GOP nominee highlighted his plans to undo President Obama’s major climate change initiative, the Clean Power Plan, and said he would lift drilling restrictions offshore and on federal lands, as well as a recent Obama administration moratorium on new coal leases.
“We have just begun, as a nation, to recognize our economic advantage that is made possible by shale energy,” said Trump, warning Clinton’s policies would hurt the industry.
Outside the convention center about 200 protesters gathered to denounce his visit, holding signs with slogans like, “Frack Trump.”
“Trump is thumbing his nose at the Paris climate agreement ,” said protester and Clinton supporter, Ray Roberts of Pittsburgh. “[Clinton] is listening to the scientists. Sadly there’s no choice. I wish the Republicans would present a candidate who would give us a choice, but right now, they’re not.”
The Marcellus Shale Coalition says it also invited Democratic presidential nominee, Hillary Clinton, but her campaign declined.