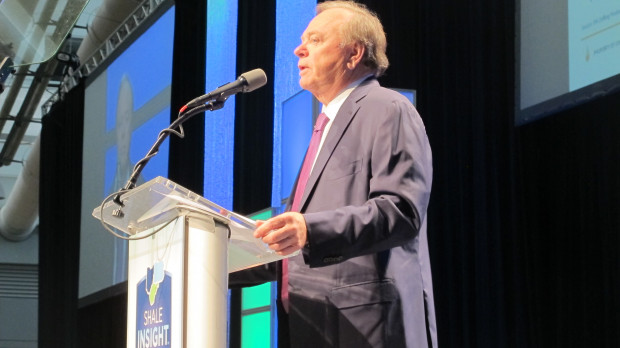 One of Donald Trump’s top energy top advisers warned an oil and gas conference in Pittsburgh Wednesday that a Hillary Clinton presidency would harm the drilling industry.
Fracking billionaire Harold Hamm spoke to the Shale Insight Conference, telling the conference that he was impressed with Donald Trump when the two met while working on the Mitt Romney campaign, and that he thought Trump was the right choice for the oil and gas industry.
Hamm is CEO of Continental Resources, one of the largest fracking firms in oil-rich North Dakota. The youngest of 13 children, he started his company in 1967, at the age of 21.
The company has flourished over the past 8 years, as domestic oil production has nearly doubled during the fracking boom.
That boom also lowered the price of natural gas, which has hurt the coal industry.
But Hamm said it’s regulations from the Obama administration which has led to coal’s demise. He warned the crowd Hillary Clinton would be an adversary for the oil and gas industry in the way he says Obama has been for coal.
“We don’t want to wait with oil and gas until we’re out of business to try to fight back. It’s too late then–you’ve got to get ahead of it so we have to step up now,” said Hamm.
Clinton has promoted fracking in her post as Secretary of State, but has also said she would not favor fracking in areas where local communities opposed it.
Hamm attacked the Obama administration’s decision to halt the construction of the Dakota Access pipeline, after a federal judge denied a request by a Native American group to halt construction.
“What we’re seeing here is a complete and total disregard of what made America great. The one thing we always had working for our country–and that was a very strong rule of law,” Hamm said.
Trump is expected to address the conference Thursday.
Hamm also warned that a Democrat in the Oval Office would mean a Supreme Court that favors more regulation, which he said would be bad for the fracking industry.
“If that happens you’re looking at 40 years of liberal rule–the impact of that on our industry is tremendous.”
Trump has raised eyebrows in the oil and gas industry when he said he would support local and state bans on fracking. A few weeks later, Hamm said that Trump didn’t ‘understand’ the issue when the candidate made the remarks.