Why the oil and gas industry is not giving to Trump 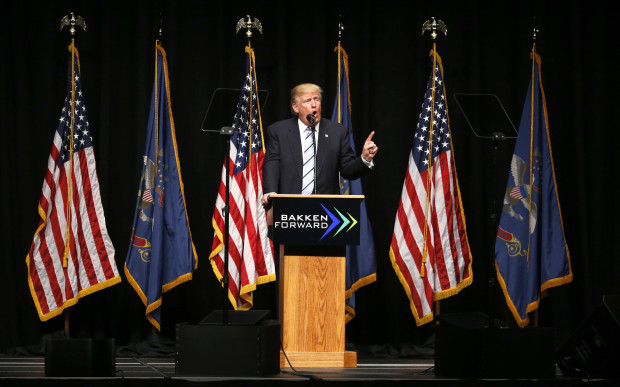 Republican presidential candidate Donald Trump addresses the crowd at the Williston Basin Petroleum Conference Thursday, May 26, 2016, in Bismarck, N.D. The oil and gas industry, usually a reliable fundraising base for the Republican nominee, has only given about $244,000 in individual donations to Trump.

One thing we can say about this year’s presidential election, it’s not following the rules of the game.  Take the oil and gas industry for example. Although Donald Trump is the keynote speaker at the annual Shale Insight conference in Pittsburgh this week, industry executives and employees have not been opening their wallets to the Republican nominee.
But in a typical election they would.  As of last week, Republican nominee Donald Trump raised a paltry $245,000 from individuals working in the oil and gas industry, according to figures provided by the nonpartisan Center for Responsive Politics. While union members and Hollywood entertainers are reliable donors to the Democratic candidate in Presidential races, industries like oil and gas line up behind the Republican.
So what’s going on here?
At an oil and gas conference in North Dakota last May, Trump came across like Santa Claus – ready to shower gifts all over coal and oil country, stripping away environmental regulations.
“We’re going to lift moratoriums on energy production in federal areas,” Trump told the industry crowd. “We’re going to revoke policies that impose unwarranted restrictions on new drilling technologies….we’re going to cancel the Paris climate agreement.”

When you hear that, you think, oil and gas industry employees should be lining up to give Trump money, right? Wrong.
Among the many oddities in this election, the 2016 Republican candidate for president has gotten peanuts from one of the GOP’s most reliable donor base.
Industry employees contacted by StateImpact did not want to speak on the record. But it could be that they just don’t know what they’ll get with a Trump White House.

In that same speech in North Dakota, Trump pledged his support for reviving the rejected Keystone XL oil sands pipeline, to wide ranging cheers. But then something else popped out of his mouth.
“By the way I may also be asking for a big piece of the profits from that so the American people can get some benefit. Why not? They can’t do it without us.”
This also generated cheers. But it’s not clear that in a company boardroom increased taxes on interstate pipelines would be so popular.
And then in August, Trump told Denver TV station KUSA that he supported local, or even statewide fracking bans – anathema to any shale gas driller. 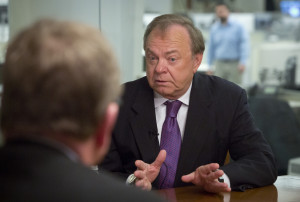 Harold Hamm, CEO of Continental Resources and among the pioneers in shale oil drilling in the U.S., is Donald Trump's energy advisor. Hamm made his fortune in the Bakken Shale fields of North Dakota and will also be speaking at Shale Insight this week.

“Fracking is something that we need,” he said when the KUSA reporter asked about local proposals to ban fracking in some Colorado communities. “Fracking is something that’s here whether we like it or not. But if a municipality or state wants to ban fracking, I could understand that.”
His energy advisor, the fracking tycoon Harold Hamm, tried to lay fears to rest, telling the Wall Street Journal that Trump didn’t really understand the concept of a local fracking ban.
Still, it could be that the industry just doesn’t know what to expect from him.
In previous presidential races, oil and gas industry dollars were a slam dunk for the Republican nominee. In 2008, John McCain got $2.6 million.  Four years later, in 2012 the industry raised $5.9 million for Mitt Romney.  And although Obama won in both those years with the help of some industry money, he didn’t break the million dollar mark for oil and gas donations.

The upside down campaign

But the answer may also lie in just how Trump is, or isn’t, running his campaign. It’s not just the oil and gas industry that hasn’t ponied up. Virtually no industry, except those working in real estate, have given significant funds to Donald Trump.
Neil Oxman, a Democratic campaign consultant, says Trump didn’t create the typical fundraising infrastructure used in past Presidential races.
“When Trump announced his campaign committee it was 15 or 20 people,” said Oxman. “It was largely New York centric, it was some Wall Street [people], some real estate [people]. It wasn’t the kind of national campaign committee that Mitt Romney had, or Barack Obama had, or Clinton. This is a totally different animal that we’re dealing with here.”
Oxman says candidates typically take years to build a functioning fundraising apparatus for a Presidential race, which is labor intensive and includes committees organized by industry. On the other hand, Trump is breaking Republican records with his online fundraising.
So, could it be that the oil and gas people haven’t given because they just weren’t asked in a way that they’re used to? Maybe. 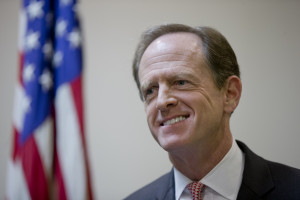 Sen. Pat Toomey, R-Pa., has raised more money from the oil and gas industry for his senate race than Trump has for his presidential bid. Toomey is one of the few Republican senate candidates refusing to endorse Donald Trump for president.

“I think because Trump is so mercurial and so unpredictable that the people who raise money and give money from all these different industries, don’t know where he stands on the issues,” said Oxman.
One industry insider speculated that Trump is coming to speak at Shale Insight not simply to drum up supporters in a key swing state, but to raise money from deep pockets in the shale gas industry. After all, oil and gas interests haven’t stopped giving to Republicans running for congress. Republican Pennsylvania Senator Pat Toomey has gotten $436,888 so far from oil and gas donors for his re-election bid against his challenger, Democrat Katie McGinty. (McGinty received $93,199 from “miscellaneous energy” donors).
This year, Democrat Hillary Clinton has actually raised more from oil and gas interests than Trump. At $552,000, that isn’t as much as previous Republican candidates, or even Obama, generated from the industry players, but it is more than twice as much as Trump.
And while Hillary Clinton spent most of August on the money trail, Trump kept on holding rallies, and narrowing her lead.
The oil and gas industry betted $9.7 million on Jeb Bush during the Republican primaries. And they got Donald Trump. So far, at least when it comes to money, the industry has sat this election out.