Nearly 4,000 tons of gas drilling waste to be used for road project 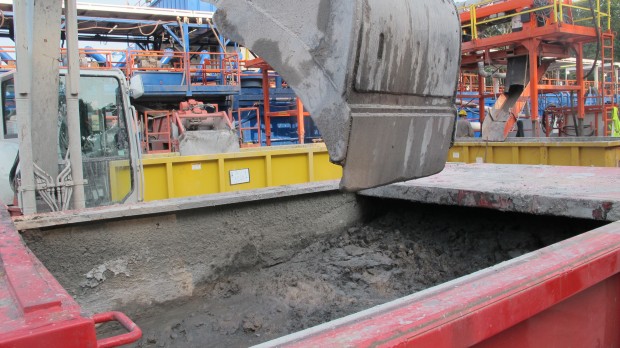 Drill cuttings are the waste dirt and rock associated with gas development. The state Department of Environmental Protection has allowed the waste to be reused as construction material under a special research and development permit.

Pennsylvania environmental regulators have green-lighted a proposal to use 3,950 tons of natural gas drilling waste for an experimental road construction project at a Lycoming County hunting club.
This approval marks the first time the waste– known as drill cuttings– can be re-purposed as construction material at an area that’s not an industrial site. The work is being done by Clean Earth, the same firm that backed out of controversial plans to put 400,000 tons of drilling waste near Pennsylvania’s “Grand Canyon” last year amid a public backlash.
Drill cuttings are the waste dirt and rock that come up from deep underground in gas development and may contain naturally-occurring radiation and chemicals. Usually, cuttings are disposed of in landfills.
This latest project involves using drill cuttings on a nearly mile-long stretch of roadway at the Bobst Mountain Hunting Club in Lycoming County. Representatives from Clean Earth and the hunting club did not respond to messages seeking comment.
“We’re worried about this,” says Bryn Hammarstrom, of the Pine Creek Headwaters Protection environmental group. “This stuff has been miles below the surface for millions of years, and now it’s being placed on the surface where it’s vulnerable to leaching into the water table.”
Over the past five years the DEP has allowed tens of thousands of tons of drill cuttings to be re-used as construction material on polluted former industrial sites, known as brownfields. The practice grew through the use of a special research and development permit. However, in March the department said it wouldn’t renew any of the R&D permits, citing a lack of transparency around how they were issued. All expire in March 2017.
Clean Earth has until December 15 to complete the road work at the hunting club, says DEP spokesman Neil Shader.
“In the future all proposed research and development projects will go through a standard permit application and review process which will include full public participation, review and comment,” says Shader. “Clean Earth has been made aware that this is the last phase that will be allowed under the existing permit. ”