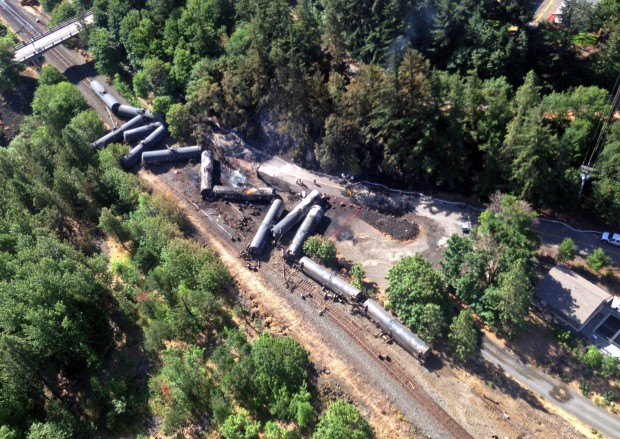 Washington Department of Ecology via AP

This aerial view provided by the Washington state Department of Ecology shows scattered and burned oil tank cars Saturday, June 4, 2016, after the most recent oil train derailment near Mosier, Ore. Union Pacific Railroad says it had recently inspected the section of track near Mosier, about 70 miles east of Portland, and had been inspected at least six times since March 21.

Two federal agencies have proposed new safety regulations for oil trains. The Pipeline and Hazardous Materials Safety Administration (PHMSA) and the Federal Railroad Administration, both divisions of the Department of Transportation, announced the proposals Wednesday, which are aimed at sharing information with state emergency management agencies. The agencies also want to require a new test for the flammable liquids.
“This rule goes one step further to hold industry accountable to plan and prepare for the worst case scenario,” said U.S. Transportation Secretary Anthony Foxx in a release.  “It would help to ensure that railroads have comprehensive plans to respond to derailments when they occur and better ensure the safety of communities living near railroads.”
The rules would require railroads to boost their current response plans from “basic” to “comprehensive” under the federal Clean Water Act, as well as prepare for the worst case scenario.
Each month, the railroads would have to provide state and tribal emergency managers with information on the number of high-hazard flammable trains expected to travel each week through each county, along with the routes of the trains and a description of the flammable liquids onboard.

Safety concerns regarding oil trains have risen since a runaway train caught fire in Lac-Megantic, Quebec on July 5, 2013. That accident killed 47 people and scorched the center of town. The oil in the trains originated in the Bakken shale fields of North Dakota. Since then, 13 crude-by-rail shipments across the U.S. have derailed, causing explosions, evacuations and spilling tens of thousands of gallons of oil.