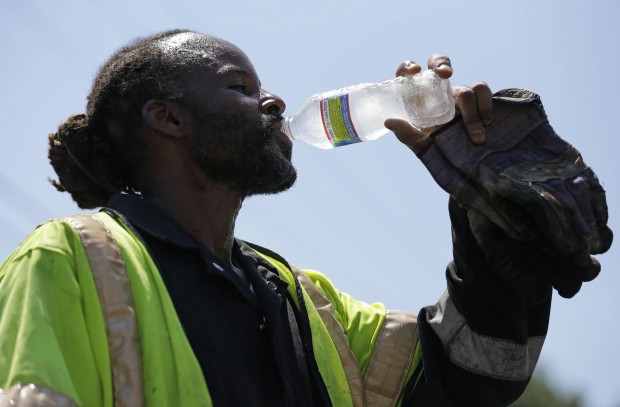 A paving crew member takes a drink of water during a record-breaking heat wave, July 6, 2012, in Philadelphia. Pennsylvania has five cities facing an increase in high temperatures and humidity caused by climate change, a report warns.

Pennsylvania will face more “danger days” of high heat and humidity in future when climate change pushes “real-feel” temperatures above 105 degrees F, a climate-research group warned in a national report published Wednesday.
The state has five of the 50 cities nationwide that have seen the biggest increase in atmospheric moisture since 1970, Climate Central said, identifying Philadelphia, Harrisburg, Lancaster, York and Reading. It warned that Pennsylvania is “particularly susceptible” to the hotter conditions.
Philadelphia is especially vulnerable to increased heat and humidity in future, and is expected to see about 40 “danger days” a year by 2050 compared with about eight at present, said Alyson Kenward, senior scientist at the Princeton, NJ-based group.
“For several cities within Pennsylvania, these cities are projected to see a really dramatic increase in the number of dangerous heat days,” Kenward told StateImpact. The hotter conditions will increase the risk of heat stroke, dehydration and respiratory problems, especially for the poor, the elderly and the very young, she said.
Nationwide, the warming temperatures will increase the number of heat-related deaths which is currently estimated at 600 to 1,500 a year, according to the National Weather Service, which calls heat the biggest weather-related killer, ahead of tornadoes, floods and hurricanes.
Kenward argued that an increase from the currently familiar 90-degree days, combined with higher humidity, will result in “real-feel” temperatures of 105 degrees more often than at present.
“A lot of cities in Pennsylvania are probably below the threshold now, and we are going to see that with a few more degrees of warming, it’s going to be at that dangerous level,” Kenward said.
Although Pennsylvania won’t see as many “danger days” as some cities in hotter southern states like Florida, Texas and Arizona, it is experiencing some of the biggest increases in humidity that contribute to dangerously hot conditions.
Some nearby states are showing among the biggest rates of increase. The report found that Delaware, New Jersey and Maryland are among the top 10 states for the fastest-warming trend since 1970, mostly because of higher night-time temperatures.
The Climate Central forecast is based on the current rate of heat-trapping greenhouse gas emissions, Kenward said. “If greenhouse gas emissions continue at their current rate, temperatures are going to increase,” she said.
Despite its warning, Climate Central said Pennsylvania is doing more than most other states to anticipate the extreme heat, drought, and flooding that are expected to come with climate change in coming years.
The researchers gave the state an ‘A’ grade in a “Preparedness Report Card” for its work on climate change, calling the state “one of the leaders” in the field, and noting that its work covers present conditions as well as future projections.
One of only six states to get an overall ‘A’ grade, Pennsylvania was awarded ‘B+’ grades for its preparations on dealing with extreme heat and inland flooding, while it got a ‘B-‘ for its work on coastal flooding.
But the group urged Pennsylvania to do more to implement its plans, such as building cooling centers for the public to use during the hottest days. “Pennsylvania has been working to understand the risk but not as much in putting that into place,” Kenward said.
Pennsylvania has produced a Climate Change Adaptation Planning report that considers different adaptation measures that could help lower their risk to things like extreme heat and sea level rise.
“What they haven’t done yet is put those adaptation plans into place, or make them mandatory,” she said, but noted that the state has incorporated projections for increasing heat into its State Water Plan, which is updated every five years.