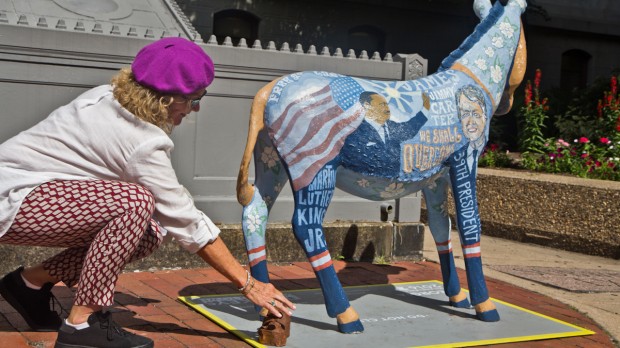 Tamara Clements with Food and Water Watch places fake dung beneath one of the Democratic National Convention ‘Donkeys Around Town’ statues in Philadelphia. This donkey is located at City Hall and represents the state of Georgia.

The Democratic Party’s draft platform, advanced by a committee last weekend, calls for a tax on carbon and other measures to tackle climate change. It also calls for a “phase down” of drilling on public lands.
However, that’s not enough for some environmental groups, which have called for a nationwide ban on fracking.
To protest what they feel is lacking in the Democratic platform, members of Food and Water Watch placed placed piles of papier-mâché poop beneath 19 of the 57 painted donkey statues set up around Philadelphia to welcome delegates to the Democratic National Convention here in two weeks.
In order to make sure the conventioneers got the message, they also spray painted the sidewalk  with “No ban on fracking, the Dem platform is crap.”

“There’s only one policy that is right for the people of Pennsylvania, both for protecting our air and water and protecting us from climate catastrophe and that is a ban on fracking,” said organizer Sam Bernhardt, noting a recent Gallup poll that found 51 percent of Americans opposed fracking, up from 40 percent last year.
The papier-mâché poop was placed by artist and Food and Water Watch member Tamara Clements, who has supported the anti-fracking cause since 2008. Clements lives in the Philadelphia suburbs — hours away from the nearest gas well — but she pointed to a natural gas pipeline explosion in Westmoreland County back in April, which she says occurred about five minutes from her nephew’s home. One 26-year-old man was badly burned.
“So many people were so close that day,” Clements said.
The current draft of the Democratic Party’s policy agenda — which was hashed out by platform committee members during a meeting in Orlando, Florida over the weekend — is seen by some as a victory for supporters of Democratic presidential candidate Bernie Sanders, who called for a ban on fracking on the campaign trail. (Presumptive nominee Hillary Clinton supports drilling as a way to ween countries like China off of coal and to relieve Europe’s dependence on Russia for natural gas.)
“None of this would have happened in this forum without Bernie Sanders pushing this issue front and center over and over again,” platform committee member and environmentalist Bill McKibben told the Associated Press.
The platform calls for putting a price on carbon emissions and increasing the percentage of energy generated by renewables.
On the other side, the Republicans are taking a different tack, affirming its commitment to domestic energy production and calling coal “clean.” Coal-fired power plants are a major source of greenhouse gas emissions, along with other air pollutants that cause respiratory illnesses like asthma.
The GOP platform also opposes all cap-and-trade policies that allow companies to buy credits to emit beyond a set limit (or “cap”) and to sell credits for cutting pollution (the “trade”).
Republican delegates will ratify the platform at their convention in Cleveland next week and Democrats will do the same in Philadelphia the following week.