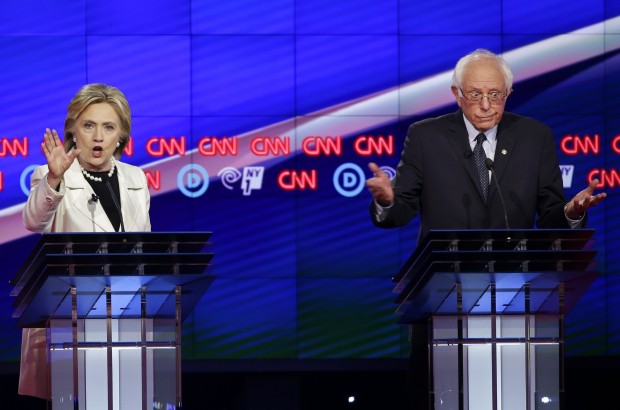 As the two Democratic presidential hopefuls try to distinguish themselves for primary voters in New York and Pennsylvania, fracking is becoming a key issue. The fracking debate is a familiar one to both New Yorkers and Pennsylvanians, and Bernie Sanders and Hillary Clinton clamored over each other during CNN’s Democratic Presidential Primary Debate at the Brooklyn Navy Yard Thursday night. New York state bans fracking, while across the border in Pennsylvania, fracking has helped make the state second only to Texas in natural gas production nationwide.
During the debate, Bernie Sanders continued his attacks on Hillary Clinton’s support for fracking and natural gas production when she served under President Obama.
“When you were Secretary of State you also worked hard to expand fracking all over the world,” said Sanders.
Senator Sanders worked to make a clear distinction between himself and Clinton, saying he would ban fracking.
Clinton cast herself as the pragmatist on energy policy. She defended her record as Secretary of State, saying natural gas could wean countries like China off coal as alternatives such as solar could be developed. She also said developing shale gas would help relieve Europe’s dependence on Russia for natural gas.
“And so for both economic and environmental and strategic reasons it was American policy to try to help countries get out from under the constant use of coal,” she said. “So we did say natural gas is a bridge. We want to cross that bridge as quickly as possible, because in order to deal with climate change we have got to move as quickly as we can.”
Clinton and Sanders also answered questions on donations from the fossil fuel industry and what to do about climate change.
Sanders charged Clinton with taking money from fossil fuel companies, which she denied, saying she, like Sanders, took donations from people who work for the fossil fuel industry.
Bernie Sanders was also critical of the recent U.N. climate agreement, saying it didn’t go far enough.
“Of course the agreement is a step forward,” he said addressing Clinton. “But you know agreements, and I know agreements and there’s a lot of paper there. We’ve gotta get beyond paper right now. We have to lead the world in transforming our energy system, not tomorrow but yesterday. And that means having the guts to take on the fossil fuel industry.”
He supports a carbon tax, and said the battle to curb climate change should be approached like going to war.
“We have an enemy out there and it’s going to cause drought and floods and extreme weather consequences.”
Clinton defended her record as Secretary of State under President Obama, saying she did much of the groundwork that led to China and the U.S. agreeing to cut carbon emissions. She said the Paris agreement provides a framework, and was accomplished despite strong opposition from Congress.
“I’m getting a little bit concerned here because I really believe the president has done an incredible  job against great odds and deserves to be supported,” she said. “It’s easy to diagnose the problem. It’s harder to do something about the problem.”
Clinton said she wants to provide “enough clean energy to provide electricity to every home in America within ten years.”
New York voters head to the polls next Tuesday, while Pennsylvanians vote a week later on April 26.