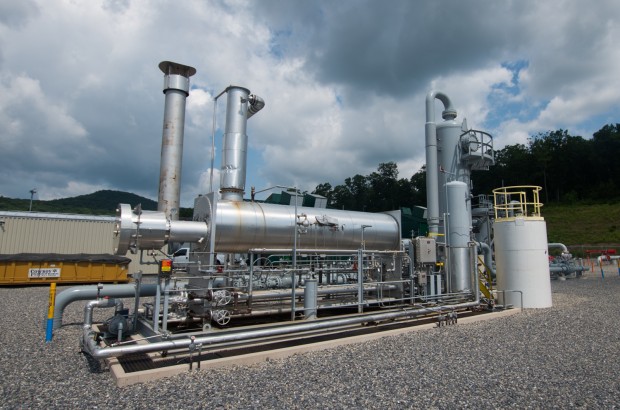 The bill would prevent state regulators from creating methane regulations that are more stringent than those recently put forth by the EPA. Methane is the main component of natural gas, and a powerful greenhouse gas that contributes to climate change. It can leak through the process of drilling and processing gas.

A bill recently proposed in the state Senate seeks to limit the Wolf administration’s efforts to reduce methane emissions from the oil and gas industry.
Methane is the main component of natural gas; it’s a potent greenhouse gas that contributes to global climate change.
SB 1327 was recently referred to the Senate Environmental Resources and Energy Committee. It would prevent state environmental regulators from creating regulations that would be more stringent than those recently put forth by their federal counterparts at the Environmental Protection Agency.
Sen. Guy Reschenthaler (R- Allegheny) is the prime sponsor. In a memo to his fellow lawmakers, he says the state Department of Environmental Protection’s efforts to go beyond the EPA would create a duplicative, confusing, and costly patchwork of standards.
“These actions harm job creation and discourage capital investment across the Commonwealth, all while providing little if any tangible environmental benefit for our communities,” Reschenthaler wrote.
Earlier this year Governor Tom Wolf announced the DEP would tackle methane emissions by creating a new general permit for Marcellus Shale wellpads. The agency is also drafting new regulations to curb leaks from existing sources such as compressor stations and wellpads, which are expected to be finalized by the end of next year.
“Governor Wolf does not support this legislation,” says his spokesman Jeff Sheridan. “Or any attempt to limit DEP’s ability to move forward with a plan to reduce emissions of methane, a greenhouse gas that contributes to climate change, and has been implicated in health risks.”
Stephanie Catarino Wissman heads the Pennsylvania division of the American Petroleum Institute, a trade group representing the oil and gas industry. She says the group is reviewing the bill with its members.
“API embraces proven, sound engineering and operating practices and regulations based on sound science,” Catarino Wissman writes in an email.  “Poorly designed policies seeking to address emissions have proven to be regressive on both the state and federal level.”
From a climate perspective, natural gas has become an attractive fossil fuel alternative for electric power generation. When burned, natural gas emits about half the carbon pollution compared to coal, which remains the nation’s largest source of electricity.
However scientists have warned that the methane leaks caused by drilling, transporting, and processing gas could undermine its climate benefits. Recent research has focused on finding the “super-emitters”– places where leaks are significant.
Joanne Kilgour who heads the state chapter of the Sierra Club is concerned about the legislation.
“The need to act is urgent and Members of the Senate who are supporting this bill are putting political games and corporate polluter’s profits ahead of public health and our environment,” she says.