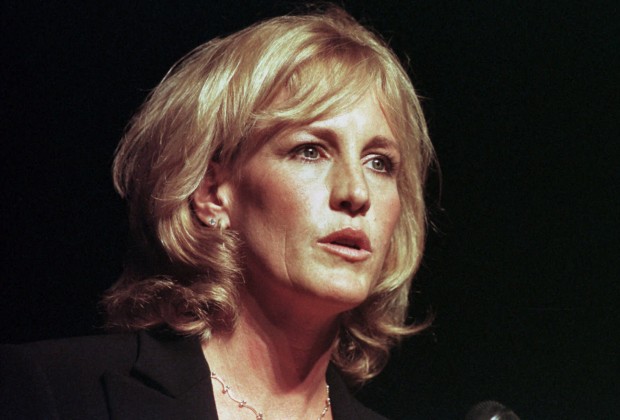 Erin Brockovich speaks at the Everywoman's Money Conference in Pittsburgh on Friday Sept. 8, 2000. Brockovich, the subject of the movie "Erin Brockovich," is a legal aide who helped win $333 million in compensation from Pacific Gas & Electric for residents of Hinkley, Calif., whose water was found to be contaminated. Brockovich spoke to suburban Philadelphia residents now grappling with their own water contamination issues.

Environmental advocate Erin Brockovich, subject of the eponymous movie about her legal battle with a California utility accused of polluting water supplies, addressed a group of suburban Philadelphia residents now grappling with water contamination linked to the use of flame retardants at the Naval Air Station Joint Reserve Base in Willow Grove and the Horsham Air Guard Station. The PFC contamination has led to the shut down of dozens of public and private wells.
“I can’t believe 22 years ago, I got involved in the water issue, and here we are in the future and it hasn’t gotten better,” Brockovich told a group of more than 200 people who packed Upper Moreland High School via video chat. “Superman’s not coming. The EPA’s not going to save us. Politics aren’t going to save us.”
The Tuesday night event was organized by the large New York personal injury law firm Weitz & Luxenberg, which framed the community meeting a “fact finding mission.” Brockovich works with the firm on environmental cases. Attorney Robin Greenwald said the firm had already been approached by more than 100 residents seeking information on a potential lawsuit prior to the meeting.
Earlier this month, levels of PFCs exceeding the EPA’s new 2016 guidelines for the cancer-causing pollutant led the Pennsylvania Department of Environmental Protection to launch a new investigation into drinking water in Doylestown, about 10 miles north of the contamination near the military bases. Read More.