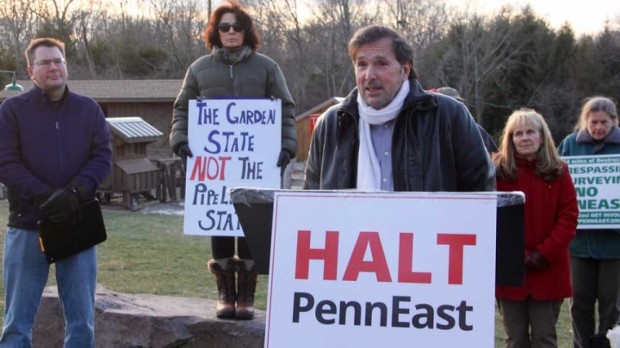 Vincent DiBianca, a resident of Delaware Township and member of HALT PennEast, says the pipeline is unnecessary.

Seven New Jersey landowners, along with two environmental groups, filed suit against the PennEast pipeline company on Tuesday for trespass. HALT PennEast, which stands for “homeowners against land taking,” along with the New Jersey Conservation Foundation and the seven residents filed suit in New Jersey Superior Court. The action marks a new tactic in the ongoing battle against new pipelines built to carry Marcellus Shale.
The landowners’ attorney Steven Richardson says state law requires that surveyors have property owner’s permission before accessing their land.
“The evidence provided to the court demonstrates a pattern and practice of a multi-year campaign of trespassing and nuisance that violates New Jersey law,” Richardson said. “We believe the action is governed solely by New Jersey Law and we believe the law is clear that you’re not permitted to enter someone’s land without consent.”
The $1 billion PennEast pipeline would be an interstate transmission line regulated by the Federal Energy Regulatory Commission, which has the authority to grant the company eminent domain authority. The company filed an application with FERC back in September, proposing a 118-mile long 36-inch wide, pipeline that would start in Luzerne County, PA, and pass through six Pennsylvania counties before crossing the Delaware River into New Jersey, and traveling through Mercer and Hunterdon counties. The line would supply other major interstate pipelines near Trenton.

The PennEast pipeline company has had difficulty securing rights-of-way from some property owners in New Jersey, some of whom have been blocking surveyors. In April, a man was arrested after allegedly threatening surveyors with a rifle.
Plaintiffs in the lawsuit accuse PennEast surveyors of sneaking onto land without authorization.
“Over the past year and a half, we have lived with continuous anxiety from PennEast surveyors sneaking or just blatantly walking onto our property,” said T.C. Buchanan in a release. “I would leave my home and get calls from neighbors that they were back. All this has happened while PennEast continues to broadcast their outright false claims that they are working with homeowners.”
Michele Byers, executive director of New Jersey Conservation Foundation said the organization has documentation of surveyors trespassing on the Copper Creek Preserve in Kingwood Township.
PennEast denies surveying land without the property owners’ permission. The company released a statement calling the lawsuit frivolous and saying the court will dismiss the claims. The company said the majority of complaints it has received from landowners claiming trespass, have actually occurred in public right-of-ways.
“While the opposition tactic of filing a lawsuit is not unique to PennEast, it clearly demonstrates the great lengths that those opposed to the Project will go to try to discredit the many environmental, practical and economic benefits the PennEast Pipeline Project will deliver to local families and businesses,” it said.
PennEast said any residents encountering trespassers should contact the company directly.
“There is certainly no systemic pattern of PennEast violating landowner property rights,” said the statement.
The company says the new line will provide needed reliability and cheaper gas to the densely populated New York and New Jersey market. They say it will also help supply the state with cleaner burning natural gas, which has been replacing coal at power plants.
Last month the Delaware River Basin Commission decided to hold its own public meetings on the proposed pipeline, separate from the Federal Energy Regulatory Commission. The pipeline project had already been postponed due to FERC pushing back its review process.

Tom MacDonald contributed to this report.
Correction: An earlier version of this story reported that the DRBC withdrew a request to hold joint review of the project with FERC. The DRBC had suggested joint public meetings with FERC, not a joint review. The DRBC has authority to conduct its own review.