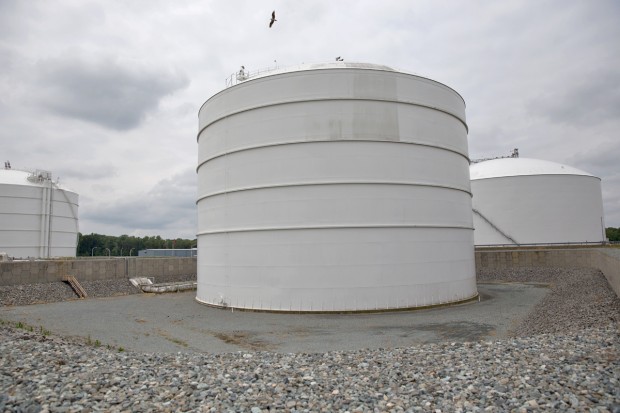 One of seven holding tanks at Dominion's Cove Point Liquefied Natural Gas Terminal.The former import terminal is getting converted to an export facility.

The battle over Dominion Energy’s Cove Point liquefied natural gas export terminal in Lusby, MD, is now in the hands of a federal appeals court, even as construction on the facility continues. The D.C. circuit court of appeals heard oral arguments from attorneys representing environmentalists, industry and the Federal Energy Regulatory Commission (FERC) on Thursday over whether or not FERC violated the National Environmental Policy Act by approving construction of the export terminal without conducting an environmental impact statement.
FERC granted approval to the $3.8 billion project in 2014, and construction on expanding the idled import terminal into an export terminal began in October, 2014. Cabot Oil and Gas has a contract with a Japanese power company to sell 350,000 MMBtu of Marcellus Shale gas per day for 20 years once the Cove Point plant is completed.
The Sierra Club, the Chesapeake Climate Action Network, the Patuxent Riverkeeper and EarthReports Inc. sued the Federal Energy Regulatory Commission after the commission rejected the environmental groups’ appeal to consider the upstream impacts of exporting LNG, and the resulting greenhouse gas emissions.
Earthjustice managing attorney Deborah Goldberg argued on behalf of the environmental groups. Goldberg says shipping the natural gas overseas will have a direct impact on the communities where the gas is produced, which in this case is northeast Pennsylvania.
“We’re trying to make the argument that when you’re the crucial link in the supply chain between the producers and the people who are going to ship and burn it then you have to evaluate the impacts of what you’re inducing upstream,” Goldberg told StateImpact.
The environmentalists also argued in their brief to the court that the LNG export terminal will result in increased greenhouse gas emissions at a time when the U.S. is working to reduce its climate warming impacts and signed an agreement to do so as part of the Paris climate talks in December.
“When you put into place an industrial facility of that magnitude and you come up with a determination that there’s going to be no significant impacts from [greenhouse gas emissions], that is just not credible under the [National Environmental Policy Act],” said Goldberg.
The groups have asked the court to put a halt on construction while the case is pending appeal.

Dominion Energy issued a statement saying the company is confident that the appeals court will uphold FERC’s original decision.

“The FERC has denied previous appeals to stop the project, and approval has consistently been upheld in the courts as well as by federal and state regulators, so we expect a similar outcome.”

FERC has said natural gas production is not connected to the export terminal. The agency says Marcellus Shale production would continue with or without the existence of Cove Point. And it says Cove Point could export gas from other parts of the country.
The American Petroleum Institute also presented oral arguments in support of FERC’s decision. In their brief to the court, API attorneys questioned the plaintiffs’ agenda.

“Although the Environmental Petitioners frame their petition as a challenge to the adequacy of the Federal Energy Regulatory Commission’s (FERC’s) environmental review of the Cove Point LNG export project, their true goal is to slow or eliminate development of all forms of fossil fuels and related infrastructure.”

API argued that FERC did comply with the National Environmental Policy Act, which, it says, does not require the commission to engage in “speculation” regarding the impact of an LNG export facility on upstream natural gas production. API attorneys wrote that the LNG export facility is a result of shale gas production, not the other way around.
The D.C. circuit is also weighing similar arguments from environmentalists against LNG export projects in Sabine Pass, Louisiana and Freeport, Texas. Shipments of LNG have already begun leaving the export facility in Sabine Pass.
Earthjustice attorney Deborah Goldberg says despite the long odds of halting the project at this point, it would set an important precedent if the D.C. circuit tells FERC to do an environmental impact statement that takes into account the environmental impacts of natural gas production resulting from the project.
“It would still be a huge decision from the court to force FERC to go back and do that analysis because they’re refusing to do that with every single case that is before them,” she said.
FERC is the federal agency that grants pipeline companies authority to use eminent domain to build interstate lines. Landowners and environmentalists are becoming increasingly frustrated with the agency because they see it as a rubber stamp for industry when it comes to expanding infrastructure. FERC denies this, citing several cases in which the courts have ruled that the commission is acting in the public interest and is not a “captured agency.”