Mariner East 2 update: Chainsaws return, along with a tree-sitter 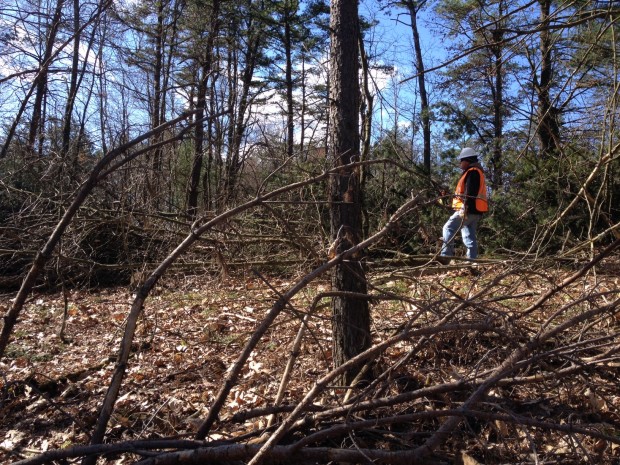 A tree clearing crew member from Sunoco on the Gerhart's property last week. Most of the trees were cleared before a March 31 deadline. Crews returned on Thursday to cut the remaining trees that were left untouched due to protesters occupying them.

A pipeline opponent in Huntingdon County has taken to the trees for the second time in a week. Elise Gerhart says she heard the sound of chainsaws buzzing on her family’s land this morning and was surprised to find Sunoco work crews cutting down trees after a March 31 deadline aimed at protecting the endangered Indiana bat. Gerhart had sat in a tree for three days last week to protect it from removal.
The trees were cleared in preparation for construction of Sunoco Logistics Mariner East 2 pipeline. Sunoco had said in a court filing to a Huntingdon County judge that they had to clear trees by March 31 in order to comply with federal regulations regarding the Indiana bat. The company stopped all activity on the land at the end of last week, and Gerhart came down from the tree.
“[Sunoco] said they had to cut by March 31,” Gerhart said over the phone from her treetop perch, “And here I am, April 7, up in a tree.”
Gerhart says she and her family never heard from Sunoco that the crews would be back to cut the remaining trees this week.
“Sunoco doesn’t do anything responsibly,” said Gerhart through a text message. “They are reckless through and through and they don’t answer to anybody.”
Sunoco spokesman Jeff Shields said the company had worked with the U.S. Fish and Wildlife Service to cut the remaining trees without endangering the Indiana bat.
“The USFWS regulations also provide the process for tree-felling after March 31,” wrote Shields in an email, “which includes additional due diligence, such as the deployment of bat biologists to verify that bats are not present in any tree to be cut.”
Shields said the company could not remove all the trees before the deadline because one was occupied by the landowner “in direct contravention of a court order.”
Huntingdon County Court of Common Pleas ordered the Gerharts to allow tree-cutting along the pipeline right-of-way.
“Today we followed the appropriate guidelines to complete the work on all but four of the trees, which were occupied by the landowner,” Shields said.
A spokesperson for the U.S. Fish and Wildlife Service says the agency was in contact with Sunoco over finishing the tree-clearing on the Gerhart’s property. She said it was Sunoco’s responsibility, not the federal agency, to inform the property owners. The Fish and Wildlife Service says it recommends no tree cutting after March 31 in order to avoid harming the Indiana bat, which emerge from hibernation in caves during the spring.
“We met with Sunoco recently, when they indicated they still had some more cutting to do,” wrote  U.S. Fish and Wildlife spokesperson Meagan Racey in an email. “Our survey guidance includes steps for cutting a limited amount of trees while surveying for emerging bats. Sunoco is following this guidance for wrapping up their cutting for the project.”
Racey says the agency has provided technical assistance and survey guidance to Sunoco. Enforcement of the Endangered Species Act occurs only if an animal is harmed.
“We have ongoing dialogue with them and will be continuing to work with them on avoiding and minimizing effects to bats and other rare wildlife,” she said.
While Elise Gerhart sat in the tree, Gerhart’s mother Ellen, along with one other person was arrested at the site today by the state police.
“The whole property is dangerous now because of what they’ve done,” said Elise Gerhart.

Ellen Gerhart (L) with her daughter Elise on their Huntingdon County property before tree-clearing began last week. Ellen was arrested today for the second time in a week while Elise took to the trees.

Opposition to pipeline projects across the state has become more heated. The Mariner East 2 project will carry propane, butane and ethane, all natural gas liquids, across the state to Delaware County where Sunoco plans to process and refine the liquids for domestic use as well as export. Sunoco also says some fuel will be unloaded at locations in Berks and Lebanon counties for local use. But opponents like the Gerharts say the company should not have the authority of eminent domain and are appealing the decision in court.
Politicians in Philadelphia are eager to see even more pipelines built in order to turn the city into the “Houston of the East.” Republican Congressman from Delaware County Pat Meehan told StateImpact at a recent Chamber of Commerce event that regulatory oversight is important, but at the same time, he worried that the state’s shale products, and jobs, would go to the Gulf Coast states.
“What people have to realize is there’s a real urgency here, we’re in a competition,” he said. “I’m trying to work with some of the agencies that are federal, Fish and Wildlife, for instance, and just ask to be assured that they are spending time and appropriately responding to the things that are necessary to continue to move a project forward.”
Sunoco expects to begin construction on the Mariner East 2 project this summer.
Correction: This article has been updated with information from Sunoco. The company says the Mariner East 2 pipeline will carry propane, butane and ethane, not just ethane.