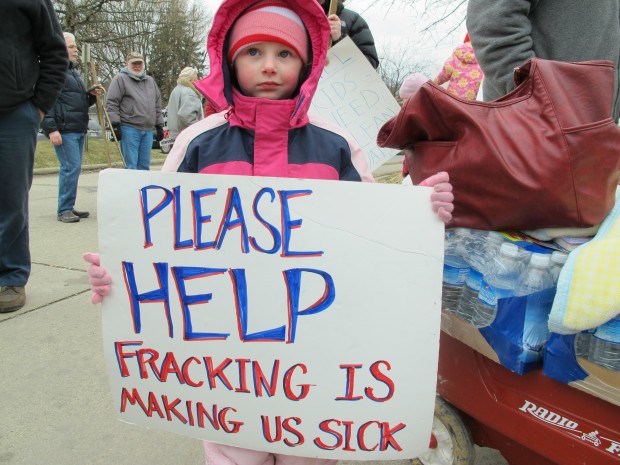 Skylar Sowatsky holds up a sign at a rally in Butler, Pa. She and her family moved after they say fracking polluted their well water.

Updating with comment from Southwest Pennsylvania Environmental Health Project
Pennsylvania public health campaigners have issued a new call for the establishment of a statewide registry of health complaints that could be related to oil and gas development.
Such a registry would help doctors and nurses identify patterns of health complaints by people living near sites such as well pads or compressor stations, and determine any link between those complaints and local air and water conditions.
Gov. Tom Wolf proposed $100,000 in his fiscal 2016 budget to set up a registry but the plan failed to get through the legislature during the long-delayed budget negotiations, prompting advocates to urge officials to take another look at the plan.
“If we had a health registry, we would be better able to document those cases of individuals who had exposures,” said Dr. Lenore Resick of the Southwest Pennsylvania Environmental Health Project, which provides advice and referrals for people who think their health has been hurt by living near gas wells in Washington County. “Oftentimes, people are exposed and it isn’t often recognized as an exposure.”
During a conference call with reporters last week, Resick said the proposed registry would be similar to those for cancer or other illnesses. “It’s a way of tracking, and it’s a way of showing, over time, the cases,” she said.
A long-term record of health reports would provide evidence of any link between ill-health and oil and gas development, as alleged over many years by critics, and denied by the industry.
“It’s difficult in an area where you have had a history of extraction to determine exactly where the exposure is coming from,” Resick said. “But over time, you would be able to show cases that would show cause and effect, and also the idea of proximity.”
Before any statewide registry is created, the Southwest Pennsylvania group is compiling its own data on the occurrence of health complaints near gas installations in its own locality, and other areas including parts of New York, Resick said.
That data has shown patterns of illness related to oil and gas drilling both in Washington County and elsewhere, she said. “We do know that emissions related to unconventional oil and gas development cause both acute and chronic effects on health.”
Any such registry would be run by the Pennsylvania Department of Health, whose spokesman, Wes Culp, said there is already a system in place that forms the “basis of a health complaint registry.”
“In response to increased citizen concerns and the emerging shale industry, DOH began collecting more detailed information and beginning this year a standardized questionnaire has been used to collect this information,” Culp wrote in an email.
The questionnaire (posted below) asks complainants to submit information including their symptoms, any medication they take, and whether they have consulted their doctors. They are also asked to state sources of concern such as natural gas wells, pipelines, compressor stations and impoundments.
He said monthly summary data based on the questionnaire are now available on the department’s web site.
The Southwest Pennsylvania Environmental Health Project (EHP) welcomed the Health Department’s questionnaire, and said it was previously unaware of the DOH initiative.
“EHP is pleased to see that the DOH has initiated efforts to address the critical need for an unconventional natural gas development registry in the Commonwealth of Pennsylvania,” the group said in a statement. “The version of their survey that we reviewed is comprehensive and would be useful in following up appropriately with individuals whose health may be impacted by UNGD.  We are hopeful that the state legislature will soon provide the DOH with adequate funding to allow them to widely promote access to the survey so that a vigorous, viable registry may result.”
In 2014, the Health Department confirmed a StateImpact report that department employees had been given a list of “buzzwords” such as “fracking” that might be used by members of the public who called in with health complaints. Two retired DOH employees said they had been instructed not to talk to callers who used those words. The department later said the instructions had been for employees’ guidance, and not to silence them.
The registry was one of a series of demands made by the public health campaigners, who claimed the support of more than 1,000 health professionals. They also called for a ban on open-air frack-waste pits; the removal of the fracking industry’s exemption from some environmental laws, and to require that fracking operations are conducted at least a mile away from schools, hospitals and nursing homes.
Spokespeople for the American Petroleum Institute did not return phonecalls seeking comment. A copy of the Department of Health questionnaire is below: