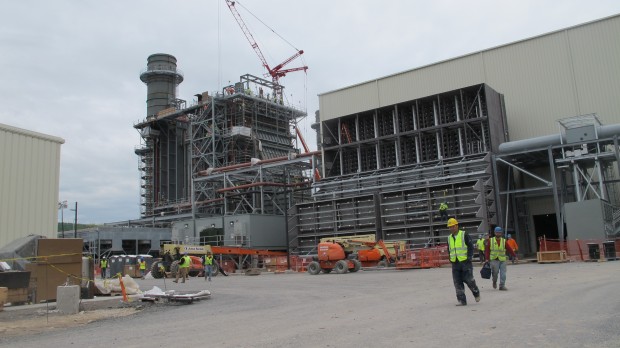 The Panda Liberty natural gas power plant in Bradford County is scheduled to come online this year. It's part of a broader national trend as the fuel powering the electric grid shifts from coal to natural gas.

Natural gas is expected to surpass coal this year as the nation’s primary source of electric power generation, according to a new forecast from the U.S. Energy Information Administration. Until the mid-2000’s about half the electricity in the country was produced by burning coal and 20 percent or less came from gas. But the fracking boom in the Marcellus Shale and elsewhere changed all that. It has unleashed huge quantities of natural gas, which drove down the cost.
“It’s primarily driven by economics and to a lesser degree some environmental regulations,” Tyler Hodge of the EIA says of the shift.
In 2017 gas and coal generation are expected to equalize as the price of gas ticks back up again.
“We’ve started seeing some slowdown of the growth of the natural gas production, so that drop in supply growth is having a pullback and pushing up the prices, but they’re still forecast to remain at pretty historic lows,” says Hodge. “We’re forecasting natural gas prices to slowly begin rising over the next 24 months.”
Over the past few years coal-fired plants have retired and in some cases switched to natural gas. Part of the shift has been driven by the Obama administration’s Clean Power Plan, which requires Pennsylvania to cut its carbon emissions by a third over the next 15 years, however it was recently stayed by the U.S. Supreme Court pending the outcome of ongoing litigation.

Gas royalties bill back in the spotlight