Gas royalties bill back in the spotlight | StateImpact Pennsylvania

Gas royalties bill back in the spotlight 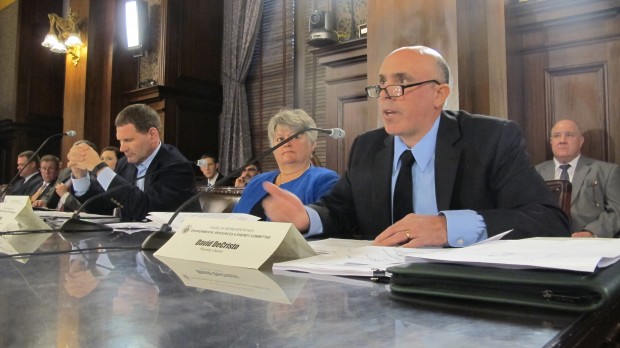 "The Guaranteed Minimum Royalty Act of 1979 was enacted to avoid some of these predatory practices," says Bradford County businessman and royalty owner Dave DeCristo. "Obviously people were getting ripped off."

Royalty advocates were back in Harrisburg Tuesday urging lawmakers to pass legislation to prevent drillers from cheating landowners out of money.
“The legislature should clearly define ‘royalty’ to prevent the theft of our resources through creative accounting,” says Jackie Root, who heads the state chapter of the National Association of Royalty Owners.
Shortly after the Marcellus boom took off, people began complaining some drillers were shortchanging them. Most of the complaints have focused on Chesapeake Energy, which has been sued over the issue around the country. The issue is complicated, and it often revolves around who pays for post-production costs, which the expenses of moving gas from the well to the market and include things like compression, dehydration, and pipeline transport.
In 2013 Rep. Garth Everett (R- Lycoming) introduced a bill to attempt to address the problem. Although the measure was approved by a House committee, it never made it to the floor for a vote. He later blamed the House GOP leadership for blocking it.
Last summer Everett revived the effort. The new bill has 37 co-sponsors from both parties. On Tuesday the House Environmental Resources and Energy committee held an informational hearing and heard testimony from landowners who say they’ve been cheated, as well as representatives from the Game Commission and Department of Conservation and Natural Resources, which have also had trouble get paid properly.
“When it comes to the Game Commission and DCNR, the amount of royalties received would appear to be about one quarter of what would have been expected based on the plain language of the lease,” says Rep. John Maher (R- Allegheny) who chairs the committee.
Dave DeCristo is a businessman from Bradford County who was previously profiled by StateImpact Pennsylvania. He told legislators on Tuesday the industry has been great for the economy, but he’s now involved in several lawsuits with drilling companies who he says underpaid him, including Chesapeake.
“I’m a person who benefited from working for the industry,” says DeCristo. “But that doesn’t give anybody the right to treat people unjustly.”
Maher said Chesapeake was invited to attend the hearing but declined. A company spokesman declined to comment on the matter.
Jessica Brisendine, an attorney for EQT, testified that different companies interpret lease terms and handle costs differently.
“EQT tries to be a responsible producer,” she told the committee. “We do not charge back the royalty interest with the entirety of the costs we incur. Not all producers do this.”
She noted the lease terms some people received might have been far less generous if such legislation were in place.
“The royalty provisions are the way they are for a reason. You may not see a 20 percent royalty rate or an upfront bonus payment of $5,000 if deductions weren’t part of that lease,” she says. “So you’re removing the benefit of the bargain producers got.”
The oil and gas industry lobbied against the previous version of the royalties bill, arguing it was unconstitutional because it would change the terms of existing contracts.
Everett told the committee he believes the 1979 law on the books already invalidates any contracts that pay less than the minimum royalty.
The House Environmental Resources and Energy Committee is holding a voting meeting tomorrow, but the royalties bill is not on the agenda. Everett’s not sure if or when the measure will come up for a vote and says he has not secured a commitment from the House leadership to support it.