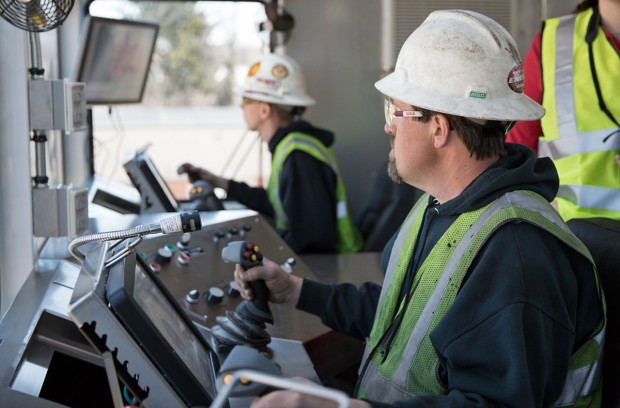 Decisions on two major gas drilling cases are now in the hands of the Pennsylvania Supreme Court. Oral arguments were heard Wednesday in Philadelphia. One case includes unresolved issues from the 2013 Supreme Court decision Robinson v. Commonwealth, the controversial and wide ranging environmental ruling that struck down parts of the state’s oil and gas law, Act 13. Pennsylvania Environmental Defense Foundation v. Commonwealth involves drilling on state forest land, and whether the legislature can use the proceeds for the general fund, instead of environmental protection as set forth in the oil and gas lease fund.
A decision on the PEDF case could have widespread impacts on cases that weigh economic development against environmental protection. That’s because the argument against channeling money from the oil and gas lease fund to the general fund relies on the Environmental Rights Amendment, or Article 1, section 27 of the state constitution.

Enacted in the 1970’s, the Environmental Rights Amendment remained an obscure section of the constitution until 2013. That’s when the Supreme Court overturned parts of the new gas drilling law. In doing so, some justices pointed to the constitutional right to ”clean air, pure water, and to the preservation of the natural, scenic, historic and aesthetic values of the environment.” But that some is important, it was only a plurality of three justices that put forth that decision. And the author of the Robinson decision, then Chief Justice Ron Castille, no longer sits on the court. In fact, the Supreme Court has three new members since Robinson was decided.
The Robinson Township decision was both surprising and controversial, celebrated by environmentalists, and derided by industry attorneys. Industry attorneys say the environmental rights amendment is too broad, and could stop good, necessary projects from getting built, or put too much power in the hands of the judiciary.
Environmentalists, on the other hand, want that constitutional guarantee of clean air and clean water to be a clear matter of law. Widener University Law professor John Dernbach advocates for a robust interpretation of the amendment. Speaking outside the courtroom during a break, Dernbach says he felt good about the line of questioning by the judges.
“You have to figure out a way to make economic development and environmental protection work together,” he said. “Yes to economic development and also yes to environmental protection and one does not trump the other.”
Arguing for the state, deputy general counsel for the Governor’s office Sean Concannon said a strict interpretation of the Environmental Rights Amendment could deter economic development and conflict with property rights. Property rights are not an issue in the PEDF case. But Concannon argued that the constitution does protect economic development through the state’s duty to provide “peace, safety and happiness.” 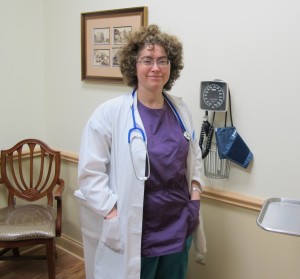 The court also heard arguments from environmentalists and municipalities that had challenged aspects of Act 13, including what became known as the “doctor gag rule,” eminent domain for gas storage facilities, and the exclusion from notification of hazardous spills for owners and residents relying on private water sources.
An overarching theme from the two-hour session was whether the oil and gas industry got special treatment from the Pennsylvania legislature when it passed Act 13 — the state’s updated drilling law.
Attorney Howard Hopkirk, from the Attorney General’s office, argued that the part of the law that requires doctors to sign non-disclosure agreements in order to get chemical exposure information to treat patients was “mis-characterized” by those bringing the case, and in fact is a benefit to doctors because it creates an obligation for the gas industry to supply doctors with information.
“That’s cute, but I don’t think it flies,” responded Justice Max Baer.
When questioned further about the interpretation of the law, Hopkirk said doctors would be able to share information with their patients, but not for instance, with the New York Times. Justice David Wecht pushed him on sharing information with medical colleagues at a conference.
“Suppose a doctor wants to gather with colleagues and talk about the science and patient experience. They’re gagged right?” asked Wecht. “They can’t gather at State College and discuss this can they?”
Hopkirk acknowledged that would “fall outside the realm of medical treatment.”
Justice Debra Todd asked: “Has the legislature made this distinction with respect to other industries?”
“Not in a specific way,” replied Hopkirk. 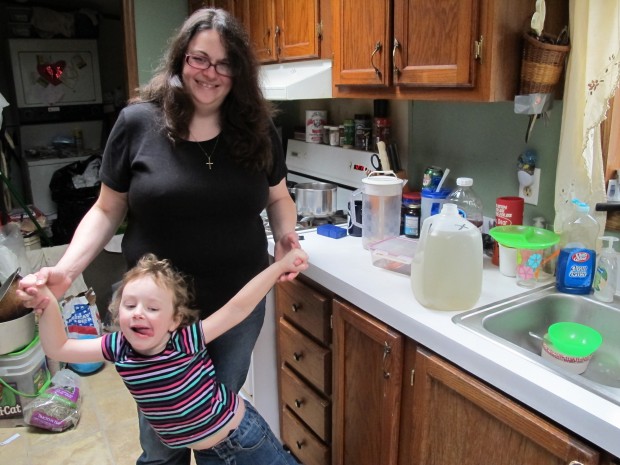 A jug of brown water from Kim McEvoy's private water well sits on her counter. McEvoy moved to a house hooked up to a public water source after she says gas drilling ruined her well water and she got no help from DEP.

One section of Act 13 addresses who gets notified if there’s a toxic spill. The law only requires the Department of Environmental Protection to inform those managing nearby public water supplies, not homeowners with private wells. In this case, the judges were looking for the rationale behind the exclusion of those drinking from private wells.
The state argued that the General Assembly has never granted the DEP authority to regulate private water wells, and until they do, the exemption is consistent with how the legislature has acted in the past.
The argument didn’t sit well with Justice Wecht. “Because private water is not regulated,” he said…”rural folks have to wait until they or their animals grow three heads?….Is that rational?”
Justice Todd weighed in as well. “It seems to me the state’s interest here is protecting drinking water,” she said. “That’s what I’m having difficulty with here. …the distinction between public and private.”

The Role of the Public Utility Commission

In July 2014, the Commonwealth Court ruled that given the Supreme Court’s decision to strike down the local zoning preemption in Act 13, it made no sense to have challenges to local oil and gas zoning ordinances bypass the traditional appeals process, and go directly to either the PUC or the Commonwealth Court. The July decision effectively removed the PUC from the new role created for the agency by Act 13. 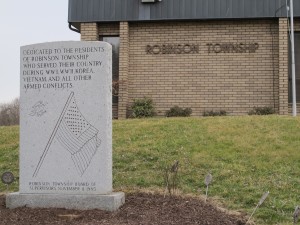 The Robinson Township Municipal building in Washington County. Robinson Township is the lead plaintiff in the case that overturned local zoning restrictions in Act 13. Initially, the township's share of the impact fee was withheld but they have since received the funds.

But the law had also given the PUC and the Commonwealth Court power to withhold a municipality’s share of the Marcellus Shale impact fee if a local ordinance was found to be in violation of the law.
Attorney Matthew Haverstick, who represented the PUC, argued that the agency should continue to maintain authority to withhold impact fee money in cases of local municipalities zoning the “how” of drilling, if not the “where.” He said the impact fee money is “conditional” and the PUC should enforce those conditions.
“They want all carrot and no stick,” said Haverstick.
Speaking outside the courtroom after the conclusion of oral arguments, attorney for the municipalities Jordan Yeager said allowing industry to fast track zoning appeals to the PUC, which could withhold impact fee funds, would lead to coercion of local communities.
“It’s a club that industry is going to use to try to get municipalities to change their ordinances,” he said.
Yeager said the gas industry should follow the same rules as other industries when it comes to challenging local zoning decisions.
The justices also heard arguments for and against the use of eminent domain for gas storage.