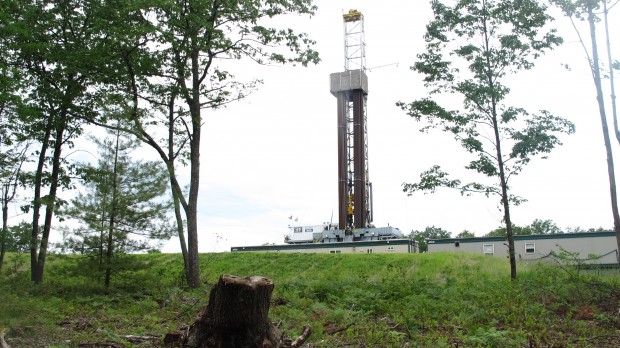 A gas rig in the Tiadaghton State Forest. Pennsylvania continues to have problems getting paid properly from gas drilling on public lands.

The gas industry’s downturn means Pennsylvania is getting a lot less royalty money from drilling on public forest land. But the state continues to have problems getting paid properly from the activity that’s still happening.
As StateImpact Pennsylvania previously reported, the Department of Conservation and Natural Resources, which manages drilling on public lands, recently hired an in-house auditor to review royalty payments from gas companies.
“We look at the receipts and the data and find discrepancies,” says DCNR Secretary Cindy Dunn.
When royalty errors do occur, she says they overwhelmingly favor the gas companies.
“The audit has definitely paid off,” says Dunn. “They usually haven’t paid us enough. If it were just a mistake you’d think half [the companies] would have paid too much and half would have paid too little, but the ‘pay too little’ outranks the ‘pay too much’ by a lot.”
Dunn wasn’t sure how much money has been recovered, but said most drillers have been cooperative and remedied problems quickly. She didn’t say whether the agency still has issues with Chesapeake Energy. The company has faced class-action lawsuits and fraud investigations over its royalty practices. A review of DCNR documents by StateImpact Pennsylvania last year showed most of its royalty problems were with Chesapeake.
In his budget proposal this year, Governor Tom Wolf seeks to move $61 million from Pennsylvania’s General Fund to offset a $51 million reduction in funding from the Oil and Gas Lease Fund. The fund was created in 1955 so drilling royalties could be used for conservation purposes. In 2009 the legislature approved a change to give the General Assembly control of the money. As the account grew with Marcellus Shale revenue, it was increasingly used to support DCNR’s general operating expenses.
Dunn says the volatility of energy markets makes it hard for the department to rely on royalty money.
“DCNR was traditionally a General Fund agency, and that makes sense,” she says. “It does not make sense to rely on something the fluctuate over time like the Oil and Gas Lease Fund.”