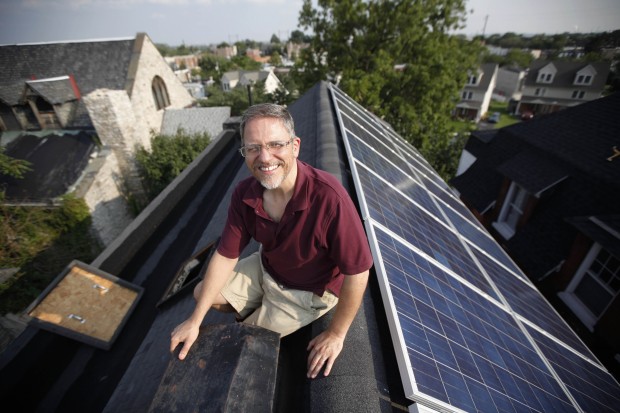 Tim Johnson poses for a portrait with solar panels on his roof in Philadelphia, September, 2011.

Solar energy advocates say a recent decision by the Pennsylvania Public Utility Commission will stifle alternative energy growth in the state. But the PUC says the decision was a compromise between two conflicting state laws.
In Pennsylvania, anyone who puts solar panels on their rooftops can sell extra energy they don’t use back to utilities. This is referred to as “net metering,” because the owner can reap the net benefits of what they use versus what gets put back on the grid.
State law limits individual solar arrays to 50 kilowatts of generation. Utilities are required to buy back excess power at the retail price, which is what consumers pay for electricity. That retail price is higher than what the utilities typically pay on the wholesale market. Pennsylvania also has laws that require utilities to purchase power at the lowest available price, according to Nils Hagen-Fredriksen, spokesman for the PUC.
The Public Utility Commission ruled last week that going forward, residents interested in installing new rooftop solar panels could be limited by the building’s historical usage. Utilities pushed for this change, saying that the higher retail price earned by residential solar producers gets passed down to consumers. They asked the PUC to limit the size of rooftop solar to 110 percent of a facility’s historical usage. But the PUC says they struck a compromise at 200 percent, or the statutory 50 kilowatts, whichever is lower.
“So coming to some form of balance between the desire to promote more renewable energy, but at the same time, to prevent the consumers of Pennsylvania from paying artificially inflated prices for power, the commission reached a compromise,” said Hagen-Frederiksen.
Solar advocates worry this will prevent new installations, and make it harder to reap the upfront investment costs paid by homeowners.
Kurt Limbach has solar panels on several of his properties. He says he doesn’t buy the PUC’s argument.
“This isn’t about an analysis of how it hurts other players,” said Limbach. “It’s just their way to knock solar off the roofs of Pennsylvanians so the fossil fuel people can keep polluting and having money shoveled their way.”
Limbach says he invested $100,000 to install solar panels on his barn in Westmoreland County, which earns him about $500 a year in energy sold back to the grid. Limbach’s current installations will not be affected by the new net metering rules.
PennEnvironment’s David Masur says the PUC overstepped its authority with the rule making.
“[This will] stifle everyday people and keep us addicted to dirty fossil fuels,” said Masur. “I don’t see any compromise. I just see something the utility companies love. They want to keep people on their systems and that’s not good for people who want to produce their own clean energy.”
Masur says there’s a backlash against solar happening all over the country. Nevada recently decided to phase out its state solar credits, while California regulators debated, but in the end agreed to continue that state’s net metering.
“The traditional energy suppliers feel threatened because green energy has gotten a toe hold,” he said.