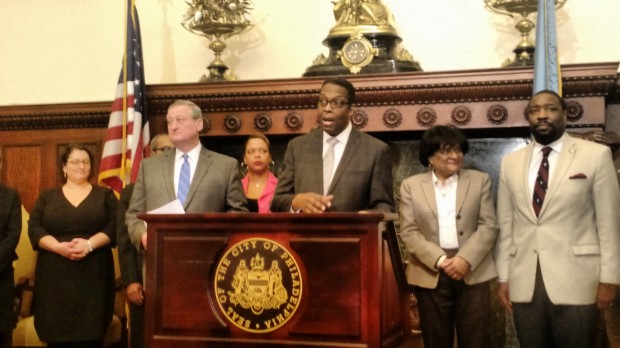 Back in January, on Inauguration Day, Philadelphia City Council President Darrell Clarke vowed to announce a “comprehensive energy strategy” he said would create “more than 10,000 new jobs.”
On Monday, Clarke made good on his promise during a press conference at City Hall, flanked by Philadelphia Mayor Jim Kenney, city council members, members of the Philadelphia Energy Authority and the CEOs of two local utilities.
Clarke’s proposal calls for investing $1 billion in public and private money in energy efficiency projects in city-owned buildings, public schools, low-income homes and apartments, and small businesses. He claims the project, called the Philadelphia Energy Campaign, would create up to 10,000 new “green jobs” over 10 years and result in $200 million per year in savings once all projects are completed.
While Clarke’s plan is long on goals, it’s short on details.

How it’s supposed to work
Here’s how these projects typically work: The city makes a deal with an energy services company or ESCO, which conducts an audit to figure out how much the city’s buildings can save energy, doing things such as replacing old boilers with new, more efficient ones. The ESCO pays for the new boiler upfront and charges the city a monthly fee for this, or other upgrades. The contract guarantees that over time, the monthly payments to the ESCO for that upgrade is less than what the city would have paid in utility bills if it had done nothing. The ESCO benefits by charging the city a mark-up for materials and labor.
Clarke wants to do this in all of Philadelphia’s recreation centers, libraries, police stations, firehouses and public school buildings. These kinds of energy efficiency projects have a proven track record in what’s called the “MUSH sector” — municipalities, universities, schools and hospitals. In Philadelphia, a project to retrofit four government buildings — including City Hall — is saving $400,000 more on energy bills each year than it’s paying to service the bonds that financed it, said Chris Lewis, chair of the Philadelphia Energy Authority.
These projects can be financed in different ways, typically through a municipal bond or through a private lender. Some ESCOs provide financing, but that’s uncommon.
The guaranteed energy savings gives the city confidence it can pay off its debt, but those guarantees are based on a stringent set of requirements, said Christina Simeone, policy director at the Kleinman Center for Energy Policy at the University of Pennsylvania. Those requirements can include heating the building to the same temperature during specific operating hours. If those operating hours change, that could blow up the guarantee in the contract. Simeone said that puts pressure on the building’s facilities managers who are often in charge of making sure the terms of the contract are being met.
“There are opportunities to make adjustments, but a successful performance contract is one in which the customer is very educated and very savvy and very diligent,” she said. “These contacts are complex. They’re implemented over a long time frame.”
Applying a complex model to new sectors
Clarke wants to expand this model to include 25,000 low-income homes and apartments, as well as 2,500 restaurants and neighborhood grocery stores.
Adding homes and restaurants is an ambitious goal.
The ESCO business model doesn’t typically pay off for home- or business-owners, unless they’re going to be there for the entire length of the contract, which can last as long as 10 or 20 years.
“In the MUSH sector, these are institutional buildings… where the owner is going to be there for the term of that contract,” said Simeone. “For small businesses, [the] residential sector, there’s very few people who tend to be in their homes for over 10 years, very few business leases that go that 10-year distance.”
So finding ESCOs willing to invest in say, a new, more efficient boiler for a home or restaurant, could be much more of a challenge than for a public library that will always be owned by the city.
The Philadelphia Energy Authority, which is coordinating the project, has not figured out how this part of the plan will work, but according to a report released by PEA, that is where much of the $1 billion will be spent, including ways to incentivize low-income homeowners and small business-owners to prioritize spending money on energy-saving measures.
“That’s one of many things that make applying this kind of a model to this non-traditional sector a challenge,” said Emily Schapira, a PEA board member who works for an energy services company, Aelux LLC.
“Yes there are challenges; none of them are insurmountable,” she added.
‘The devil is in the details’
The project will be rolled out over 10 years, starting with city-owned buildings and public school properties.
As for the 10,000 jobs, Schapira said 3,000 will come in the “implementation phase” and 7,000 in the “savings phase.” Each phase includes people employed directly by the project, including those who would, for example, install a new boiler or new windows. Their 10,000 jobs number also includes “indirect jobs” generated by the supply chain, as well as “induced jobs” created by income spent by those gaining money as a result. However, Schapira said PEA cannot estimate the number of direct jobs until the authority knows “the exact scope of the projects.”
Tim Kelsey, an economist at Penn State University, said the job estimates may be a little high, but not unreasonable.
“One of the main purposes of this is basically the energy savings within the community,” Kelsey said. “It does save school districts, homeowners money. In many ways, that’s probably more important than the job creation elements.”
Another question is how the project will be financed and how much city money will be spent.
On that front, Clarke did not have an answer yet.
“The devil is in the details and we are currently working with the devil to get the details of some of those programs,” he said. “I mean, seriously, in government, people expect us to recognize the challenges and the need and we’re supposed to come up with a solution and if we don’t do it, it won’t happen.”
PEA expects to release an implementation for the project in six months.