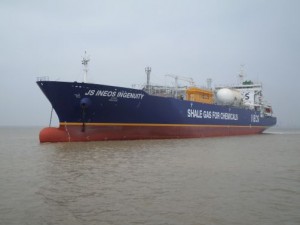 INEOS plans to begin exporting ethane to Norway and Scotland in mid-February. Eight new ships have been built for the project.

Ship traffic up and down the Delaware River is bouncing back after a slump that began in 2008 due to the Great Recession. In addition to the improved economy, a new export product has driven much of that growth — natural gas liquids from the Marcellus Shale.
Dennis Rochford leads the Maritime Exchange, which acts as a chamber of commerce for the Delaware River in Pennsylvania, New Jersey and Delaware. He says propane and ethane from the Marcellus Shale are increasingly heading to Europe.
“This is going to be a growth of cargo on the river that will help expand overall the number of vessels arriving on the river.”
Rochford says ship traffic jumped ten percent between 2010 and 2015. Propane exports more than doubled from 2014 to 2015, jumping from 28 to 75. In mid-February, the first ships full of ethane are expected to leave the port of Philadelphia for Europe.
Rochford says at its peak, the river’s ports handled 2500 ships a year.
“It appears that the trend line now is going to move our port back up to the 2500 vessel arrivals, which is what the norm was prior to the recession,” he said.
The Swiss company INEOS has commissioned eight new ships that will be able to carry up to 800,000 tons of ethane, a raw ingredient for plastics and manufacturing products, to Norway and Scotland. The gas gets shipped to Marcus Hook from southwestern Pennsylvania through pipelines.
Not everyone is cheering the uptick in shale gas activity in Philadelphia, however. A new coalition of environmental groups has formed to fight the concept of Philadelphia becoming an energy hub. Tracey Carluccio is with the Delaware Riverkeeper, which is part of the newly formed Green Justice Philly.
“Our main concern is the environmental impact of all this transport activity but also the refining of the oil and natural gas products,” said Carluccio. “We think Philly needs to move away from refinement of fossil fuels and toward a stable green economy.”